The following article is based on Trent Hummel's presentation at the 2017 Dealership Minds Summit. To watch the presentation, click here.

“We’re saying 3-3.5 turns is good on used equipment? I don’t know how you’re going to cashflow your businesses in 5 years if you’re not shooting for 4-plus; you’re going to run out of money. This stuff is too expensive, and the manufacturer is going to dump more onus on you and your stores. We should be shooting for a minimum of 4 and going for 6.”

What I’ve got is a kitchen table education. I come from a long line of wholegoods managers. A lot of you know my dad, Roy. I presented the following ideas to him in 2005 when things were a mess.

I said, “Why do we pay the salesmen like we do? If you understand negative cashflow, why do we always pay them? They make a bunch of gross margin on the new and then we take a trade and can’t get it sold. So we already paid them money to sell the bloody new one and then we’ve got to pay them a spiff to bring in the one that we bought wrong?”

He said, “Well, that’s because we always done it that way.” And I said, “That’s not good enough.

“Because we’ve always done it that way? That isn’t good enough. Let’s do something different.”

Trent Hummel is a fourth-generation dealer. His family’s Case IH dealership (started in 1923) and New Holland dealership (which he purchased in 2001 with a cousin) were sold to Rocky Mountain Equipment in 2008 and 2010, respectively. Since then, Hummel has been consulting on used equipment through the Western Equipment Dealers Assn. while serving currently as the general manager and sales manager at a 2-store complex the last 2 years. After opening up his Dealership Minds Summit presentation by citing how wholegoods turns has suffered between 2012 -16 (falling from 3.25 to 2.53), Hummel delivered a lively address to attendees and recalled a list he’d shared with his dad in 2005 after which his company achieved turns that were 5-10 times the industry average and 3 times the industry benchmark. “When we operated the New Holland dealership, we consistently had 10-12 used turns while maintaining great market share around 35% market share in combines. We never had a unit that had a birthday.”

So for you guys who know my dad, you know, he’s calm, cool, collected and he seldom makes a wrong decision. So this is the list I made in 2005 and gave to him and my partners …

So that’s what I presented to my dad. He says, “Well, what the hell are you going to do about that?”

I said, “I’m not going to pay any salesman until every trade in the series is sold.” He said, “It’ll never work.” I said, “Well, good. Let’s try it and see if we chase them all off.”

Here’s a word of advice. Don’t use the word “holdback.” I’ve done enough focus groups to know the biggest negative in any commission plan is a holdback. So this is called a “backloaded” commission.

Now, the concept will never work until you teach them about negative cashflow. The biggest problem in this industry is we don’t teach the what, why and how. You guys are hearing a lot of ideas over the last 2 days. 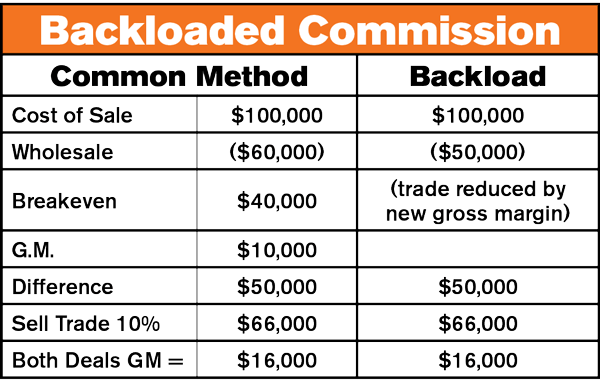 Fig. 1. With a backloaded commission, the commission on a sale is held until the traded unit is sold as well.

Fig. 1 explains the common method of commission (left) and the backloaded structure (right), which is the commission when all the units are sold. For this example, it’s a $100,000 sale.

“You get to talk to, learn from and make networking relationships with people doing your same job. In most cases, it’s not what you know, it’s who you know. If you can know other people that are doing your job, it’s going to help you do yours better...”

And it works. I can’t even begin to tell you how many salesmen suddenly have a place to go with that trade. They all said they never had a place to go. When you backload their commission 100% and they’re not selling it, they’re not getting any money until the last trade is sold.

It’s amazing how many deals come in and how they can dig up customers to buy that used stuff.

I did this at a New Holland store and then also brought it to a 2-store complex a year ago. At that company, one store was game for it, but the other store resisted. So I said, “Fine. We’ll run two different commission plans. The store that went on the backloaded structure saw their turns go from 1.8 to 12 in one year. It’s amazing.

What happens when the first salesman can’t get the trade sold? The other guys get it sold and they get half the commission. So if salesman one sells the first trade and salesman two sells the second, they split it 50/50. If there’s a third trade in there, they split it 3 ways. It’s easy.

If they don’t want a fourth guy in there, guess what they do with the farmer who brings in the old junk tractor? The salesman has so much influence on that deal to tell the guy, “You know, sir, you’re better off to take that unit to auction than to sell it to us — because we’re going to steal it from you.” We want to chase him away from trading that junk anyway. And they do it because they don’t want any more names or any more salesmen in that series of trades. The fewer the names, the more margin they see and the more money they get. It’s worked very well.

Salesmen hate it when the dealerships take the manufacturer bonus from them; they think it’s their money. I let them have 100% of it. But in return, I don’t want to ever hear any rumblings about when we make a mistake on used and how they had to sell it for no margin or a loss. I don’t want to hear that they want a spiff when I let them keep the manufacturer sales bonus. On the finance and insurance, I give them the same 25% gross margin to keep it easy.

I’ve seen it work with big and small iron and different size dealers. I had a dealer with a 3-store complex, who after 2 months said they cleaned up all the used. He said, “We don’t take trades or the trades we do take are the cherries.” They can walk away from the junk. The salesmen know they’ve got to take good trades if they want to sell them. If they don’t, they just stand there and they never get paid for that.

You’ve heard a lot of stuff and a lot has been shared. I learned a ton, sitting here and visiting with you all and watching the presentations. Jim Weber  shared how a dealer was achieving 12 turns.

Remember that the biggest failure in all this, in all of life, is not to try. I encourage everybody to try something.