Casey Seymour swears by this strategy for managing used — and new — inventory for the best cashflow.

When managers talk about used equipment remarketing the phrase “there’s no silver bullet” gets thrown around a lot. But, what if there was a crystal ball, a way to know how much new equipment your dealership can sell and still work its way through the used equipment coming back in on trades? Casey Seymour, a location manager and former remarketing manager for 21st Century Equipment, a 16-store John Deere dealership based in Scottsbluff, Neb., and a 2017 Farm Equipment Best-in-Class Dealership, says a crystal ball tool does exist. And it is called the washout cycle.

A washout cycle, as described by Casey Seymour, remarketing manager for 21st Century Equipment, is the number of units generated from the sale of a new machine until the last used unit does not generate a trade. “It is a dealership’s ability to sell the used equipment generated from the sale of new equipment and have a clear understanding of the volume of used equipment it can digest in a given amount of time,” he says. The washout cycle is the best method for controlling current and future inventory, helps predict affects on ratios and matrixes based on current sales situations and helps predict what will happen if the market turns up or down.

Managing used equipment inventory starts with the new equipment, Seymour says. “The new piece is going to dictate the number of trade-ins that you have coming in. Very rarely do you sell something new that doesn’t have a trade attached to it,” he says.

During Farm Equipment’s 2017 Dealership Minds Summit in Omaha, Seymour told dealers, “I’m not going to sit up here and tell you that you’ve got to stop selling new. That’s a decision that you need to make at your store level. But, you’ve got to understand what you’re getting yourself into.

“My job as a remarketing manager is to talk to the sales managers, location managers, salespeople — I’m their conscious. I’m the voice on their shoulder telling them, ‘Hey guys, we need to pay attention to where we’re at and what we’re doing. Because if we don’t, we’re going to end back up where we were before.’ That doesn’t make me the most popular guy in the dealership. But that being said, my job is to make sure we help manage the risk and to see what we’re going to do with the inventories when they come in.”

Seymour says when he’s doing a machine inventory budget, he first takes a look at what the dealership currently has in inventory to start modeling out what the washout cycle looks like. He asks, “What machines do we have and where are they in the washout cycle?” Once those questions are answered, Seymour says you’ll have an idea of what you have in inventory to potentially work through. “Then look at what you’re going to sell new and what those machines are and how that’s going to work with your used inventory that comes in,” he explains.

“Understanding that volume lets you also know what kind of timeframe you’re looking at to get rid of the machines you have, either coming in on trade or the machines you have in your inventory right now,” he says. “It also helps understand where you’re going to be at as far as cashflow goes and your used equipment inventory turn, as well as your return on assets.”

Have a Contingency Plan

In addition, Seymour always sets up a contingency plan for what the dealership will do with used machines they can’t sell in a certain amount of time. The contingency plan should answer questions like:

“All these different things need to come into play so you know what you’re going to do moving forward,” he says. “I found that the washout cycle is the best way to do this. You’ll be able to understand how many new pieces of each type of equipment you can go out and sell and then wash through what your inventory is so you know where you’re going to be in the end.”

He adds: “When you start to look out in the future as to what you see coming down the pike for the market and the economy, then you can see how your overall inventories go. And you’ll also be able to see the outcomes of your current inventory as well, as to where they are in the washout cycle.”

Seymour says while this doesn’t seem like an overwhelming amount, it can quickly become a bigger deal than you think. He gives this example. “Let’s just say you keep the same average of 125. You think that’s what you’re going to go out and sell. You actually decrease the marketplace to 94 units, but you go ahead and still assume you’re going to see 125 units. And you go out and sell 28 or 25 new units. You’re only looking at 6 or 7 combines that are going to be stepping in there to take its place. It doesn’t seem like much, right? It doesn’t seem like that’s a big deal. It’s only 6 more combines that you’re bringing in. That’s not a big deal. But it really is; it’s bigger than what you think.”

If you look at selling one new unit at $450,000, then each subsequent trade below it at about 25% less than the first one (see Fig. 2). That 25% figures in reconditioning costs, your margin expectations, cost to hold. etc. “When it’s all said and done, to sell out 6 units at 4.5 times washout, you’re going to have to sell through $5.8 million worth of inventory to do that,” Seymour explains. “And if you do a 5 times washout, you’re looking at $6.1 million. Now, that’s 27 or 30 additional machines that you’re going to have to find someone to buy.

“Now, does that mean you’re going to find 25 or 30 customers to go buy those? I hope so if you go out and sell them. If not, you’re going to be left with something that’s going to sit on your lot and age. A lot of these machines are the ones you’ve had on your lot for a year or more. If you go back and look at it, these are the ones that you went out and probably stretched a little bit to get them into inventory to make that deal happen.”

All the used equipment on a dealer’s lot is cash. And it can add up quickly. Fig. 3 shows how the cost to hold (at about 0.5% per month) a used unit impacts your dealership’s cashflow. Seymour says after a used unit has sat on the lot for 9 months, that’s when dealers start to have trouble moving it. Fig. 3 shows how much a dealer is paying to let that unit sit on the lot 9 months. “If you keep these same 6 machines and you’re doing a 4.5 times washout, at the end of 9 months, you’re going to spend roughly $263,000 in holding costs to hold that machine,” he says. “There’s a lot of things you can do with $263,000; a lot of programs you can build and other equipment you could go purchase. That’s a lot of money that you’re out there floating. 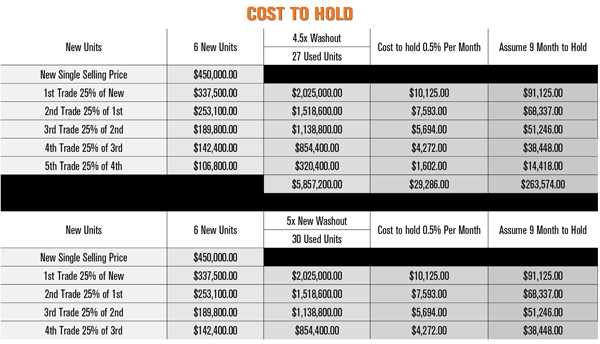 Fig. 3. This table shows how used equipment inventory ties up cash. To hold 6 machines for 9 months can add up to $263,000. Click to enlarge photo

The top 25% of your used inventory generally sells pretty quickly and the bottom 25% are the ones that are going to be hard to move, Seymour says. “Those bottom 25% are the units that are going to drag down your inventory. It adds up pretty quickly. If you look at my inventory, that’s why we have some machines that are old that we have to get pushed through. And it’s not just combines or not just tractors, not 4WDs. It’s a spectrum of things that we have to look at,” he says.

At the heart of it, Seymour says you have to remember that a machine is a machine. “No matter how emotionally attached you get to a deal or how good a piece of equipment is, a machine is an inanimate object. It doesn’t care where it is. It’s going to have no concept of time, value of money or margin, equipment turn or asset turn. It doesn’t care. So have a plan of what you’re going to do and move forward with that plan. I know it will hurt for a few times but I promise you in the long run, it will be better.”

This article was originally published in Farm Equipment's October/November 2017 issue.

[Video] Washout Model Planning to Control Used Inventory ... Before You Sell the First One

Ask the Expert: How the Washout Cycle Works with Key Reconditioning Points