Consultant Dr. Jim Weber urges dealers to buy smart, limit reconditioning, be attentive to sales mix and compensate sales on what matters most.

The following article is based on Dr. Jim Weber's presentation at the 2017 Dealership Minds Summit. To watch the presentation, click here.

There is cash in used iron, and for most farm equipment dealers that pre-owned inventory represents the path to the overall health and lifeblood of their business.

Dr. Jim Weber, a 40-year veteran consultant and trainer in the farm and construction equipment industry, says an on-going survey of large volume dealers in Canada shows used equipment turn rates — and corresponding positive cashflow rates — have fallen by about a third since 2012 as many dealers have been busy selling new equipment, with wholegood transactions averaging 81-82% of their dealership’s total sales.

“The average margin on new equipment has averaged 7.75% since 1982,” Weber explains. “With much higher margins possible on used equipment, if you manage it correctly, you can see the negative effect of what happens when the mix of new and used equipment skews from an ideal 40% of wholegood sales down to 31%.

“When you sell more equipment at 7.75% and less at rates possible on used equipment, overall margins of the business suffer,” he explains. “In addition, while the dealers were selling the new equipment, they apparently didn’t mount the effort to continue selling trade-ins at the 2012 turn rate of 2.98 times, but allowed the turn to fall to 1.98 times in 2015.”

Speaking to Farm Equipment’s 2017 Dealership Mind Summit in Omaha, Weber told his audience the drop in the turn rate in the Canadian study also showed average cashflow went from $474,000 in 2012 to $163,000 in 2015, attributable mainly to the change in wholegoods mix and the collapse of the turn rate on used equipment.

“This business, as I have written continuously over the last 25 years, is not about the paper profits you generate. It is about the positive cashflow that you generate,” he explains. “If you are going to generate the cash you need to meet future obligations, you will have to do so by managing the used turn.”

Weber says dealers need to judge used sales not from a profit over assets standpoint, but from the view of net profit margin times the asset turn.

“Each set of transactions returns 20%, but more turns increases cash flowing into the business,” he says. “Now I’m not suggesting we’re going to have a 20% net profit or that we’re going to have a given number of turns per year, but I am urging you to look beyond the margin and profitability to focus on how quickly you are turning the asset.”

For the first time in Dealership Minds Summit history, the Farm Equipment content team is making a session available in its entirety to all subscribers for FREE. Dr. Jim Weber’s keynote session (including a two-camera view of both he and his slides), is available for FREE viewing online courtesy of Montag Manufacturing, both in its entirety and in quick-hit segments in a series. You can watch this highly informative and entertaining session that challenges the status quo here.

Weber has developed a system of four categories to manage used equipment and he says adopting it usually means significant changes for many dealerships. The steps include:

1. Bought Right is Half Sold

Weber says many dealerships lose money by paying too much for trade-in equipment. Usually, he says, the cause is the product of a sales representative striving to sell new equipment and over estimating the value of the trade-in and under-estimating reconditioning costs during the sale.

“Determining an accurate value of a piece of equipment involves no genies or pixie dust, and admittedly, there is no ‘absolute’ number out there for a given piece of equipment,” Weber explains. “Still, there are tools to establish a fairly accurate figure.

“You look at historical sales from your own dealership; like items, like products. You’re going to look at the published Iron Solutions guides. You’re going to consult auction prices, whatever Big Iron and others are reporting, and you’re going to monitor iron jockeys for pricing clues,” he explains. “You take an amalgamation of that data and determine what the machine is worth today.”

“Remember, we’re trying to improve the turn rate of used equipment, so the ‘when’ of selling helps determine what you should bid for trade-ins,” he says. 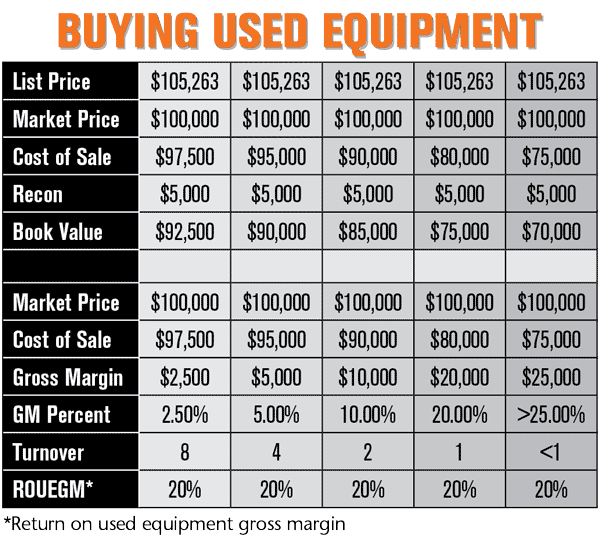 “Take a tractor that we’re going say this is what it should sell for today (Fig. 1).

What if the salesperson says it will take 90 days to sell the tractor?

Buying right, based on the time of potential sales in mind, is a sure way to improve margins on used equipment, Weber says.

“We have to start thinking along these lines,” he adds. “Don’t be holding equipment for 365 days. Never, ever let something have a birthday on your lot. Don’t be holding it 730 days, hoping and praying that someone’s going to come in to purchase it — someday.”

Weber says most problems concerning reconditioning come from people buying equipment who are not trained in estimating equipment values or repairs. That, he says, and buying sight unseen. And, a dealership’s philosophy to make “better than new.”

“Others include charging internal rates lower than customer rates and having no way of stratifying used equipment,” he explains.

“The connections and camaraderie developed here has been a career-changing factor...”

“I’m going to segment my inventory by new, new-used or ‘pre-owned,’ and used/salvage,” he says. “I’m going to look at the buying motives of the people who buy new and pre-owned, and compare them with the motives of customers who buy used and salvage.”

Weber says those who buy used and salvage generally don’t plan their purchases, they have mechanical aptitude, they buy price, they buy impulsively, they buy in the dealership and brand is not important.

“I would never, ever, ever recondition those units. I just wouldn’t do it,” he says. “I would make certain these units start. I would put a new seat in them, and I would have four tires — all of the same brand — inflated properly.

“And when someone wants to buy them ‘field-ready at a used/salvage price, I’d point out what ‘field ready’ would cost, and then offer them a parts certificate if they will buy it for the asking price today.”

Weber says consider the automobile trade when you determine the difference between “pre-owned” and used/salvage.

“You know the difference. The cars that have been maintained, washed and cleaned, had their fluids changed regularly and have service records to back it up. Those are ‘pre-owned,’ and you know the people who have them,” he says. “I’m going to recondition equipment like that, probably for very little money, and I’ll make money when I sell it.”

Weber has these suggestions for managing reconditioning costs:

Weber says strategy is supported by goals and there should be one set of dealership goals and a complementary set of goals for salespeople.

Weber says managers should look for the following traits in salespeople:

“As strange as it may seem, I prefer salespeople from a non-farming background, because many individuals who come from the farm have trouble determining the difference between sympathy and empathy and fall victim to the ‘Kindred Spirit Syndrome’ when dealing with customers. I want someone who thinks with their head and not their heart,” he explains. 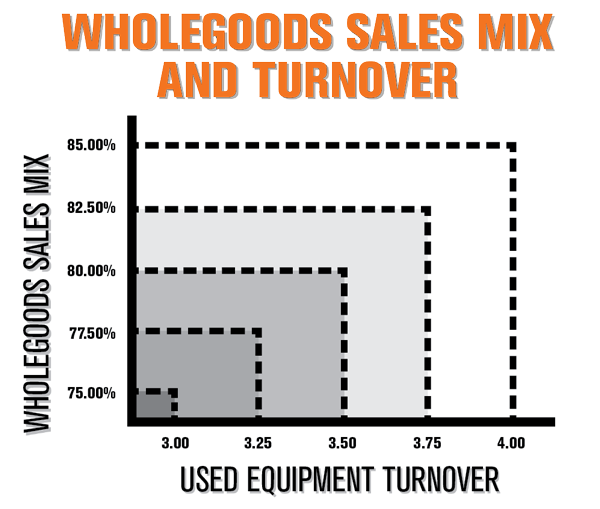 Fig. 2. Dr. Jim Weber advises dealers to manage their wholegoods sales to aftermarket mix to 75% or less. At 75%, a 3 times turn on used equipment is needed. If wholegoods increases to 80%, turns must increase to 3.5.

The second dealership goal on Weber’s list is to manage the wholegoods sales mix to 75% or less (Fig. 2).

To maintain proper cashflow for a healthy business, the higher the wholegood fraction of the mix, the faster used equipment must be turned, he says.

Weber says the third dealership goal is to manage the new/used sales mix until used sales are greater than 40% of the business.

“Since 2000, it has been 32%. So all we’re doing is making the major farm equipment manufacturers happy as we dig the hole deeper and deeper for ourselves,” he explains. “You have to slow the process down on new equipment and put the emphasis on the backside until you have at least 40% or more used.

“To do that, you have to resist market share demands, eliminate and minimize roll-overs and sell more used equipment. At the same time, we need to back-end load gross margin, so if your margin on new equipment is 3, we should be looking at 6 to 9 with a turn of 3 on used equipment. We also need to change the compensation system for our sales staff to accomplish this.”

On the sales side, he says there are three basic goals:

“As I’ve said, I want a money-motivated individual selling for me,” Weber says. “It is my responsibility to show that person there are only two ways to make more money — ratchet up sales and increase gross margins from those sales.

“Ultimately I have to show the salesman mathematically what he has to do to make X dollars,” he says. 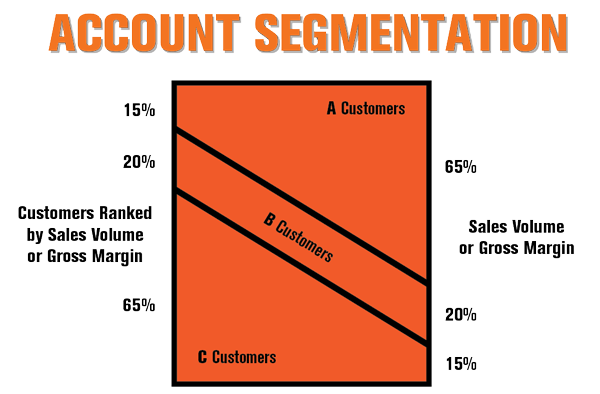 Fig. 3. There are 3 levels of customers. ‘A’ customers should account for about 15% of your business and 60% of your volume.

Second, account segmentation is important to set priorities on where salespeople expend their time and energy (Fig. 3).

“The ‘C’ customers, will provide only 15% of the business volume, so it’s obvious we need to be spending the bulk of our time with ‘A’ customers and those who have shown they do business with us.”

This segmentation allows management and sales staff a way to organize the 25-35 calls per week Weber says is necessary for a healthy sales effort and the third goal for the sales staff — a minimum number of farm calls per week.

Part of the strategy to improve cashflow through improved used turn and accurate trade-in purchases involves incentives for salespeople to meet and exceed performance goals. (For more on sales compensation, see p. 38-53.)

“Over the past 2 years dealers have been asking me if they should change their compensation systems because of complaints from their sales staff. They don’t like the way they are compensated.

“I didn’t have one call like that during the 2009-12 period when they were making more money than they’d ever dreamed of,” Weber says. “The market is down now and they have to work harder to make the same money, but I wouldn’t drastically overhaul the compensation system.

“My response would be to pay them 10% of the gross margin on the front transaction of new equipment — which is going to be very little. Then, I’d pay them 40% of the margin on the back end, to improve the turn rate by encouraging them to sell used equipment.