A little over one-quarter (25.4%) of the total responses to Farm Equipment’s 2017 brand loyalty study came from farmers who list their primary equipment brand as Case IH. This is down from 32% in the 2014 study and up from 17% in the 2011 survey.

Of those farmers who say Case IH is the brand of their primary equipment, 80% describe themselves as “brand loyal.” For the farmers generating more than $1 million in annual revenue, 83% call themselves brand loyal, while 77% of those under the $1 million market say they’re loyal to the Case IH brand.
Source: Farm Equipment survey, June 2017

Would Case IH farmer describe themselves as “brand loyal” when purchasing farm machinery? Some 80% say “yes,” which is the highest percentage of all the brands included in the 2017 survey. This is a solid improvement from 74% in 2014 and huge improvement from 35% in 2011.

When broken out by annual revenues, 74% of Case IH farmers in the under $1 million level describe themselves as brand loyal, and 83% of those in the over $1 million group say they are loyal to the Case IH brand.

Time to Buy. When starting the purchasing process to replace, update or add to their current lineup of machinery, 76% of Case IH farmers indicate that they want to purchase the same brand as their “primary equipment.” This compares with 66% in 2014 and 53% in 2011.

Purchased Other Brands. When asked if they had bought another brand of equipment in the past 5 years, in each case, farmers who are dedicated to Case IH-brand equipment reduced their purchases. The biggest gains came in seeders/planters and spraying equipment.

Broken down by annual revenues, the biggest contrast came in haying equipment, where 39% of farmers earning less than $1 million in annual revenues purchased hay tools produced by another manufacturer other than Case IH, while only 16% of the over $1 million revenue group bought other brands of hay tools.

In addition to asking farmers, “When you purchase new (not used) farm equipment, do you begin the process with the desire to purchase the same brand as your tractor/combine?” The survey also asked them “Why?” Here’s what Case IH farmers had to say.

“I like the corn planter, the electronic handshake is much easier … One stop parts … quality and dealer service … don't buy much new equipment … same line products match new electronics on tractors … Ease of chasing down parts … Better machines … Looking for best implement to get the job done. Best value for the money is a secondary condition … I look at every brand option … local dealer support … Different needs and applications … Familiarity with operational functions … I can get parts and service at the same location … Good quality & good dealerships … parts & service dealer support, equipment reliability … Because the dealer is only 7 miles away … I have had good machines and good service … If not combine — go by price … familiar with the machines and know the support I receive … Because a combine is not a tractor. The combine maybe the best, but the tractor maybe an 'also ran'. Our big baler was sold by Case IH but was built the same as Hesston, Massey, New Holland and maybe John Deere, which one is best? The cheapest … I like the quality … That's what we are used to using and have no desire to change.

“Because I have received excellent service from the brand … Have had good luck with the old … Dealer Relationship … Dealer long time friend and we worship at same church … Familiar with product … dealer cooperation … Past experiences … Dealer support … dealer … Good dealer … Look at the best dealer, not the mega-dealers, they are the worst … known quantity … Because its all I've ever had … I know what to expect from my local dealer and it has been positive … Dealer support … I purchase the farm equipment that does the best job for that particular type of operation … dealership … Case IH doesn't usually have the type of equipment I need … Loyal to the service provided by my dealer … Dealer … Trusted dealership …. Quality, familiarity, dealer … Other equipment isn't necessarily the best … Loyalty.”

Then & Now. Since the 2011 study, Case IH has made significant strides in improving their standing with farmers using their machines. 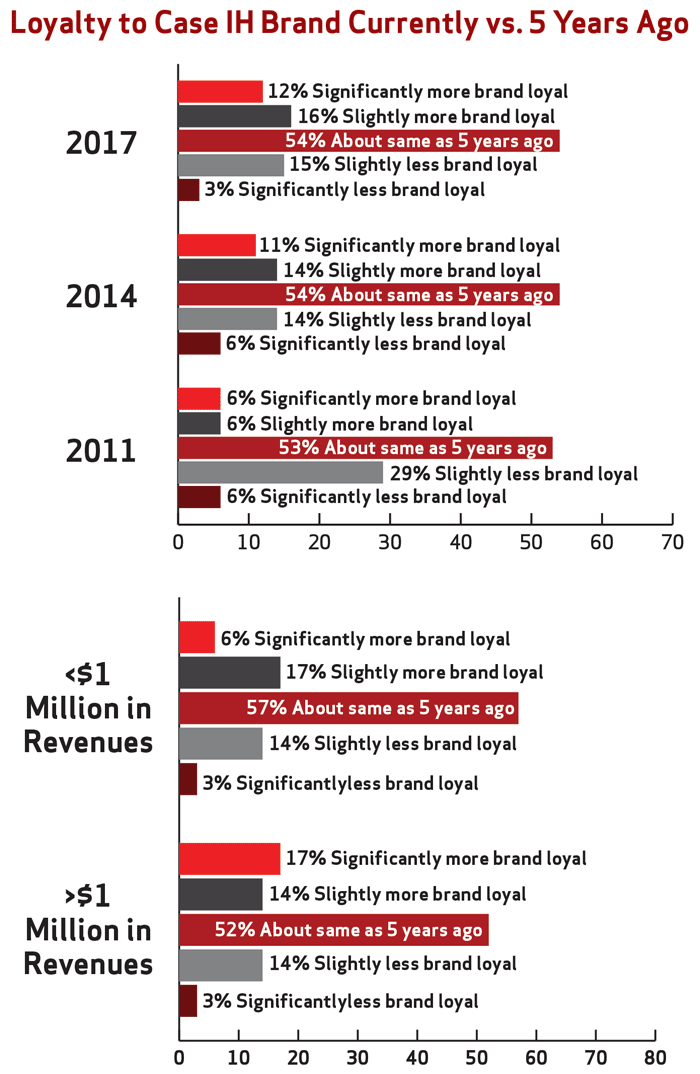 In 2011, only 12% of Case IH farmers said they were “significantly” or “slightly” more loyal to their brand, while 35% reported being less loyal over all. The remaining 53% said they felt about the same way as they did 5 years earlier.

When it comes to comparing Case IH farmers by revenue levels, 31% of those in the over $1 million revenue category shared that they were more loyal in 2017 and 25% in 2014.  About 17% in the last two studies report being less loyal, while 57% in the under $1 million and 52% in the over $1 million level report said their loyalty to Case IH was about the same as it was 5 years earlier.

Reasons to Switch. Case IH farmers ranked “better parts availability” as the #1 reason they would switch brands, with 81% rating it as “very important” or “somewhat important.” “Better dealer service” followed at #2 (77%) with “better product engineering,” (62%) which was ranked #1 by all farmers, occupying third place. 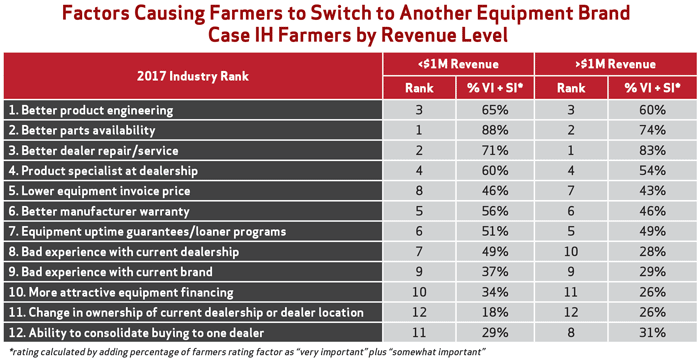 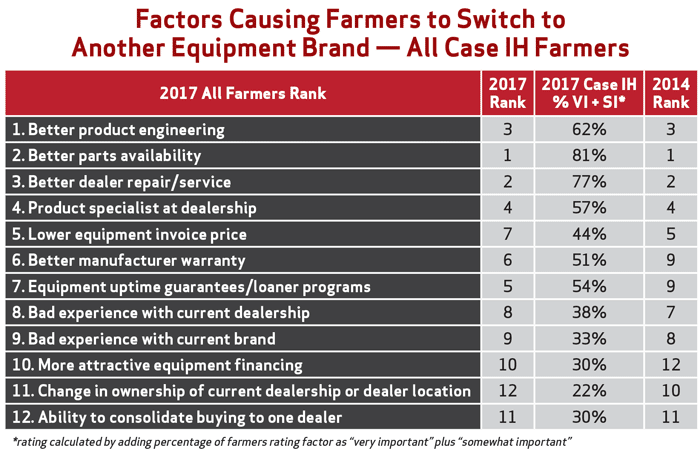 With some minor shifts, the ranking of reasons that would cause them to change equipment brands Segmented by annual revenue, Case IH farmers’ list didn’t did not differ significantly from that of all farmers.

In addition to asking farmers, “Considering the decline in commodity prices during the past few years, has your attitude toward equipment purchases changed in that you are more willing to consider brands other than the one that you would typically prefer?The survey also asked them “Why?” Here’s what Case IH farmers had to say.

“Final price of equipment and service … Like where I am at … The ability of precision products to integrate with another brand ... It will not necessarily save money in the long run … dealer … I have a good dealer … Because I know my brand and how it works … A large difference in investment would influence me … Best price … I guess my thoughts about the farm economy has nothing to do with brand loyalty for myself. I've decided not to purchase any equipment until things improve … location … Stick with a winner … Stay with what works best.”

“Dealer loyalty goes both ways. Cannot afford downtime and past experience is that when I need help, I get it … Tighter budget need lower price on equipment … quality of the machine as well as resale and trade-in value and parts availability from the dealer on both counts of considering purchases … we like the service from the current dealer … Who has the better deal will generally get the deal … Dealership and service … Value is essential … Because of corn prices … Looking for better value … Brand loyalty … Looking for the best value … I would if equipment preformed better and held up better … No major issues with what we have now … dealer support is very important … I believe in this brand … I do not care for the JD dealers in this area! … What I don't like is a manufacture lowering the quality of the equipment just to be priced lower. Customers are willing to pay price for perceived quality. A cheaper price for poorer quality doesn't make sense in any economy. Better quality will carry a farmer through until the economy improves and then they can purchase another piece of equipment … We buy John Deere combines, but other equipment is based on other factors considered at time of purchase … Financial situation.”