Overall, farmers who consider AGCO brands (primarily Massey Ferguson and Challenger) as their primary line of equipment on their farms made up 6.5% of the total 276 responses in the 2017 survey. This is up from 5.5% in the 2014 study and 4% in the 2011 survey.

Compared to the first two surveys, AGCO has made the most progress when it comes to brand loyalty by the farmers who consider machinery manufactured by the company to be their primary line of equipment. In the 2011 study, only 25% of farmer who considered an AGCO brand to be “their” brand said they were brand loyalty. This improved to 33% in 2014. The percentage of AGCO farmers who now say they are “brand loyal” jumped to 60%. This is a 27% improvement in just 3 years.

AGCO has seen continued improvement in farmers’ level of loyalty to the brand, increasing from 33% in 2014 to 60% in 2017. Based on annual revenue, 64% of AGCO farmers generating more than $1 million declare themselves loyal to the brand. For those producing less than $1 million annually, 57% would describe themselves as “brand loyal.”
Source: Farm Equipment survey, June 2017

Time to Buy. When starting the purchasing process to replace, update or add to their current lineup of machinery, AGCO farmers were asked if they desire to purchase the same brand as their “primary equipment.” The company saw solid improvement as slightly over 65% said “yes” in the most recent survey. This compares with 50% in 2014 and 75% in 2011.

When AGCO farmers begin their purchasing process, 65% say that they desire to buy the same brand of equipment as their tractors and combines. For those AGCO farmers earning more than $1 million in revenue annually, 73% start their buying process looking at AGCO equipment, while 57% of those generating under $1 million a year initiate the buying process by considering AGCO products.
Source: Farm Equipment survey, June 2017

When responses to this question were segmented by revenue level, an interesting dichotomy showed up. While 57% of the AGCO farmers in the less than $1 million in annual revenue said “yes,” nearly three-quarter in the over $1 million category said “yes.” This 16% difference among AGCO customer would appear to be significant, and may be worth further study.

Purchased Other Brands. To further test their level of loyalty to “their” brand, AGCO farmers were asked if they had “purchased any of the following types of equipment that was not manufactured by AGCO in the last 5 years?”

The biggest improvement came in combines. In 2014, 50% of AGCO farmers reported buying a brand combine other than AGCO. This dropped to 5% in the 2017 survey. The company also gained ground with seeders/planters as only 9% said they had purchased another brand in the past 5 years vs. 33% three years earlier. AGCO scored a solid improvement with sprayers also, as 12% of their customers indicated they had purchased another brand recently compared to 33% in the 2014 study.

Equipment categories where AGCO lost some ground were most notable with tractors. In both the 2011 and 2014 surveys, no AGCO farmers reported purchasing a tractor other than that manufactured by the company. This time around 20% said they purchased another tractor brand in the preceding 5 years. Tillage equipment was another area where AGCO slipped. In 2014, 17% of customers said they purchased other tillage tools not produced by the company. This increased to 28% in 2017. The same trend was seen with hay tools, as 24% indicated purchasing other brands of equipment vs. 17% in 2014.

In addition to asking farmers, “When you purchase new (not used) farm equipment, do you begin the process with the desire to purchase the same brand as your tractor/combine?” The survey also asked them “Why?” Here’s what AGCO farmers had to say.

“Confidence in equipment and reps … Need good local dealer … To get what I need … more familiar with operational controls … Pricing and features, not brand drive my decision … Good service and reliable parts … I have had some problems with Agco products recently, so I went for something else … same dealer … dealer service … Good in trestle rate and good dealers.” 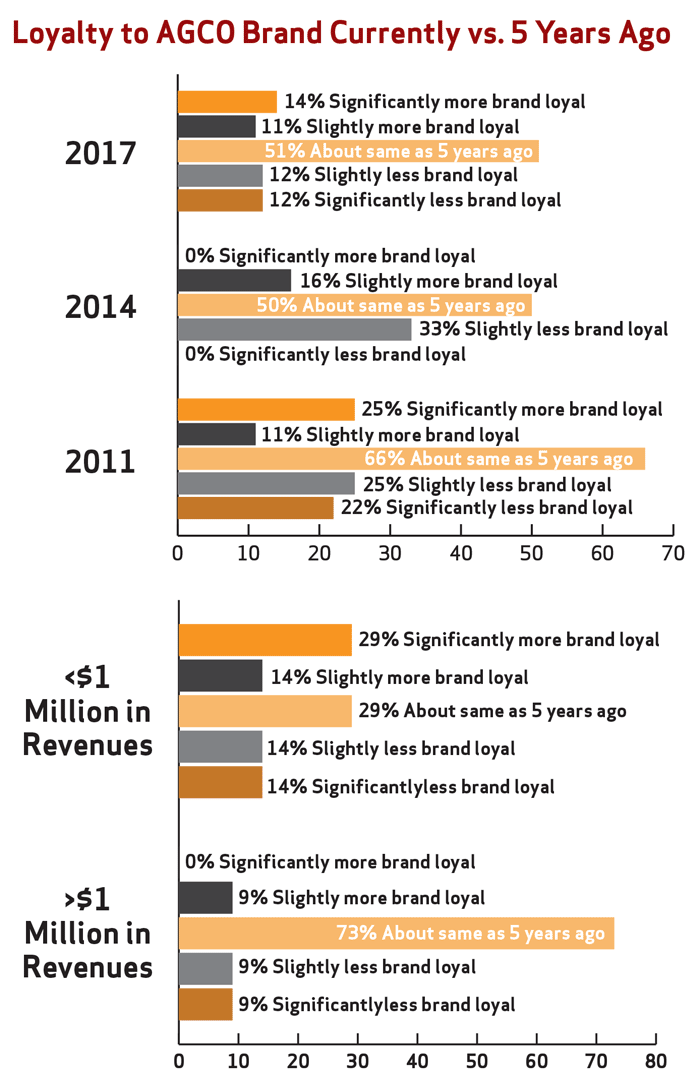 When broken down by annual revenues, responses by farmers in the under $1 million category would seem to indicate that there has been major shift taking place. Some 43% of these AGCO farmers indicate that their degree of loyalty has increased, while 28% report that it has decreased, and 29% say it’s about the same a 5 years ago.

This contrasts markedly when compared to AGCO customers in the $1 million or more in annual revenues. An overwhelming 73% say their level of loyalty is about the same as 5 years ago, while only 9% say it is “significantly” or “slightly” increased for the better, and 18% said it has declined compared to 5 years ago.

Reasons to Switch. For AGCO farmers overall, the first three reasons that would cause them to switch brands centered on the dealership, and the fourth and fifth on the manufacturer. Considering all AGCO customers, regardless of annual revenue, the #1 reason would be “better dealer repair/service,” followed by “better parts availability” and “product specialist at dealership.” The #4 and #5 reasons they would consider switching brands were “better manufacturer warranty” and “better product engineering.” 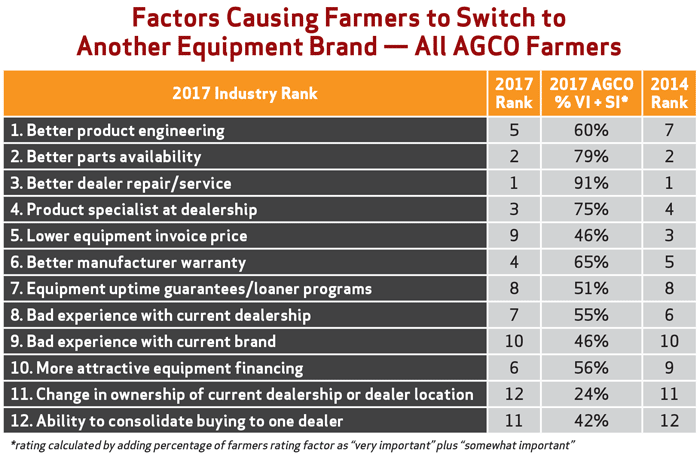 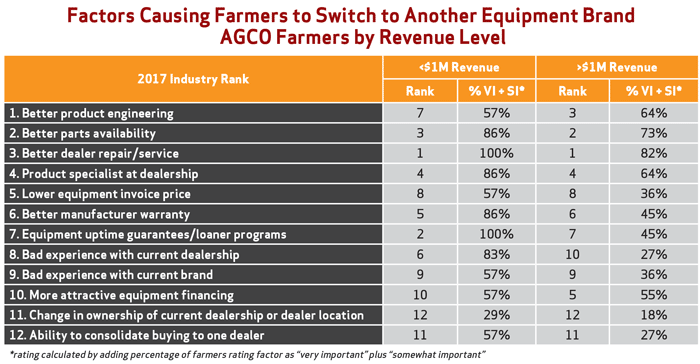 While some insist that farmers will switch brands based on equipment pricing, this finished at #9 based on the responses from all AGCO farmers. This changed only slightly when this group was segmented by annual revenue, finishing #8 for those in the under $1 million and over $1 million categories.

For those in the over $1 million in revenues, “better dealer repair/service,” “better parts availability” and “better product engineering” respectively were listed as the top three reasons to switch brands.

On the other hand, for AGCO farmers in the under $1 million in annual revenues group, the #1 was also “better dealer repair/service,” but #2 was “equipment uptime guarantees/loaner programs.” This was #7 on the farmers with revenues of over $1 million.

Tough Ag Economy. Finally, AGCO farmers were asked, “Considering the ongoing low commodity price environment in agriculture, has your attitude toward equipment purchases changed in that you are more willing to consider brands other than the one that you would typically prefer?

Of all AGCO farmers responding to the survey, 63% said “yes.” Segmented by annual revenues, of those in the under $1 million grouping, 71% replied “yes” to this question, while 55% of farmers in the over $1 million category indicated they would consider another brand besides AGCO.

In addition to asking farmers, “Considering the decline in commodity prices during the past few years, has your attitude toward equipment purchases changed in that you are more willing to consider brands other than the one that you would typically prefer?"

The survey also asked them “Why?” Here’s what AGCO farmers had to say.

“Kuhn hay equipment … Prices, dealer are most important … If another brand will do the job I want, is cheaper to operate and is of equal quality, I would consider it … As long as the different brand meets my standards, I would look at a different brand. Especially if they have changed design and I feel that it would not live up to my expectations and/or farming practices … if it meets my needs and proved right I will consider it … dealer loyalty … dealer service is very important ... if current equipment declined in reliability … They are all expensive. Changing brands would not change the dynamic.”