Compared to the first brand loyalty study in 2011, New Holland has made great progress in cementing the allegiance of their farm customers. In that year, only 44% of farmers who considered New Holland as their primary brand of equipment said they were loyal. That grew by 19%, to 63% who declared themselves “brand loyal” in 2014. And that’s where it remains today, according to the results of Farm Equipment’s 2017 survey.

The level of loyalty to New Holland-branded equipment held steady at 63% in 2017 compared with 2014, when 63% of the company’s customers described themselves as “brand loyal.” Breaking it down by annual revenue, the percentages did not change.
Source: Farm Equipment survey, June 2017

Based on annual revenue — less than or more than $1 million — there was no difference with 63% reporting they are brand loyal and 37% saying they are not brand loyal.

For those annual revenue under $1 million, 63% report that their preference is to purchase equipment from New Holland, but for farmers with revenues of more than $1 million annually, 75% start their decision making by first looking at the company’s products.

Purchased Other Brands. When it comes to its customers purchasing equipment made by other manufacturers, New Holland gained some ground and lost some ground compared to the results of the 2014 study.

Their gains came in combines along with haying and spraying equipment. In 2014, 29% of New Holland farmers reported purchasing other brands of combines. This fell to 13% in the most recent study. More than 40% said they bought hay tools produced by other equipment makers. This fell to 20% in 2017. When it comes to spraying equipment, 71% reported purchasing other brands of sprayers in 2014, while 50% said they bought liquid application equipment from other suppliers.

The company’s biggest drop offs came in seeding/planting equipment as 75% of New Holland farmers acquired this equipment made by other manufacturers vs. 57% in 2014. Surprisingly, 33% said the acquired tractors that were not branded New Holland in the 2017 study, which is up from 25% three years earlier. With tillage tools, nearly 70% admit to purchasing equipment not manufactured by New Holland and this compares to 57% in 2014.

When annual revenue is considered, the biggest difference came with spraying equipment and seeders/planters. For New Holland farmers in the less than $1 million category, 75% say they purchased another brand of sprayer, while of those in the higher revenue level, 50% report buying a sprayer from some company other than New Holland.

In addition to asking farmers, “When you purchase new (not used) farm equipment, do you begin the process with the desire to purchase the same brand as your tractor/combine?” The survey also asked them “Why?” Here’s what New Holland farmers had to say.

“Dealer, familiarity … durability and easy of operation … Know how it works, monitors, etc. … color doesn't make the difference … Parts and filters interchange with some of the equipment. Employees know who they are dealing with … They have been the same or better in different areas, basically the same or more advanced in technology, less expensive to buy, same or better service, normally less expensive parts and repairs … Have great relationship with New Holland dealer … Looking for best piece of equipment regardless of brand.” 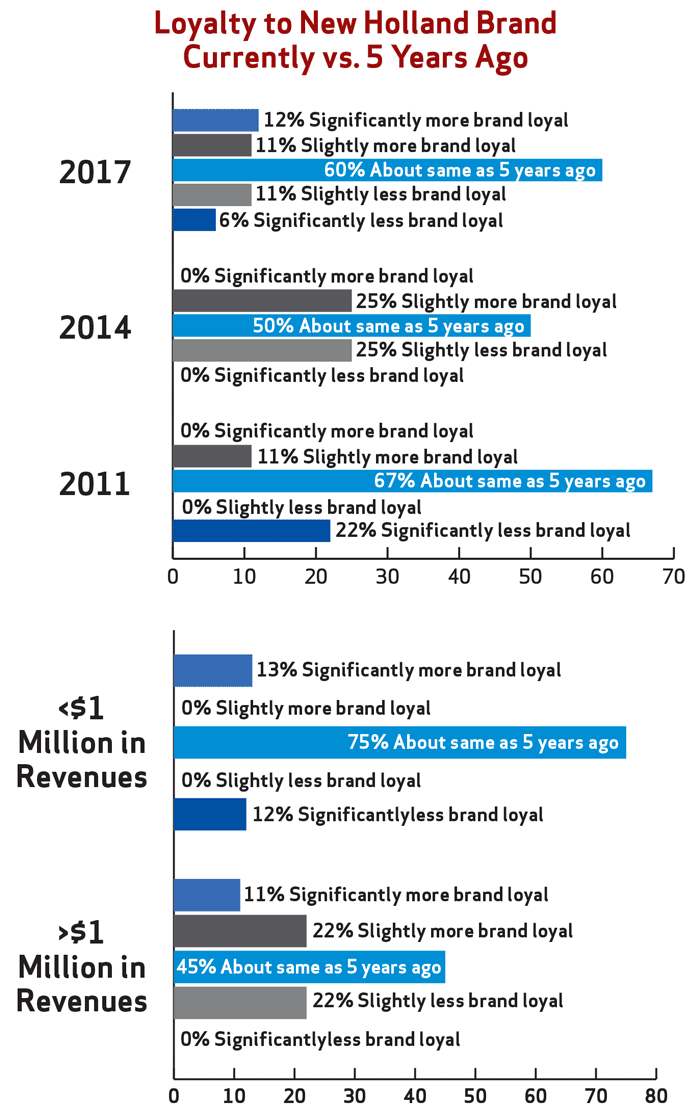 When broken out by revenue levels, of those in the under $1 million group, 13% say they are “more brand loyal,” while 12% indicated they were “less brand loyal.” The remaining 75% say they feel “about the same” as they did 5 years ago.

On the other hand, 33% of the New Holland farmers who generate $1 million or more in annual revenues report being “more brand loyal” and 22% say they are “less brand loyal” than they were 5 years ago. The remaining 45% indicate they feel “about the same” as they did.

Reasons to Switch. While, as a whole, all farmers ranked “better product engineering” as their #1 reason to switch brands, this factor placed #3 with New Holland producers. Dealership issues topped the list with “better parts availability” as #1 and “better dealer repair/service” coming in at #2. 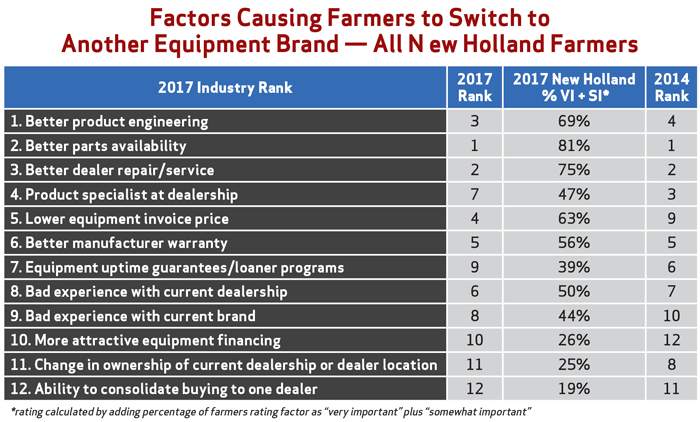 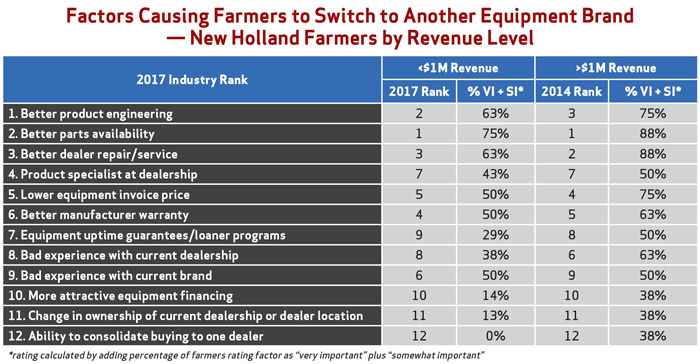 In fact, the #1 reason to switch equipment brands — “better parts availability” — was the same across the board, even when segmented by annual revenue levels.

But then some minor swapping of reasons showed up. For those New Holland producers earning $1 million or less revenue, the #2 reason was “better product engineering” and #3 was “better dealer repair/service.” These were flip flopped for the growers in the more than $1 million in revenue category.

Tough Ag Economy. Probably the most curious parting of ways for New Holland farmers based on annual revenues came when the were asked: Considering the decline in commodity prices during the past few years, has your attitude toward equipment purchases changed in that you are more willing to consider brands other than the one that you would typically prefer?

In the current low commodity price market, one-half (50%) of New Holland farmers report that they would consider another brand given the circumstances. But when segmented by annual revenues, the New Holland farmers could hardly be farther apart. Of those in the over $1 million category, only 75% would consider switch equipment brand, while the exact opposite is true of those in the under $1 million group.
Source: Farm Equipment survey, June 2017

For the group generating less than $1 million in revenues, only 25% said “yes” they would consider another brand in the current ag economy, while the remaining 75% say “no,” they would not.

The exact opposite was the case for New Holland producers in the $1 million or more in annual revenues, where 75% indicate they would consider switching brands in the current low commodity price environment. The rest, 25%, say they would not consider other brands of farm equipment.

In addition to asking farmers, “Considering the decline in commodity prices during the past few years, has your attitude toward equipment purchases changed in that you are more willing to consider brands other than the one that you would typically prefer?The survey also asked them “Why?” Here’s what John Deere farmers had to say.

“I am satisfied w what I am using now … would not because of experiences with other brands prior … Whoever has the best deal! … actually more expensive … Availability of parts and product. Would change on used equipment first … Price is more important now than in the past … Would not consider another brand at this time … $.”