Does the level of a farmer’s annual revenue impact his brand preference and decision making when it comes to purchasing new equipment?

The brand loyalty studies that Farm Equipment conducted in 2011 and 2014 were limited to grain farmers in 12 states with annual revenues of $500,000 or more.

Prior to conducting the 2017 survey, the decision was made to segment the farmers to those with $500,000-$999,000, which is shown in the tables and charts as <$1M, and those with more than $1 million in annual revenues, shown in the charts and tables as >$1M, to determine if there were any significant changes to how the two groups might differ when it comes to equipment brands and purchasing decisions. This part of this special report presents the data by farmer revenue. 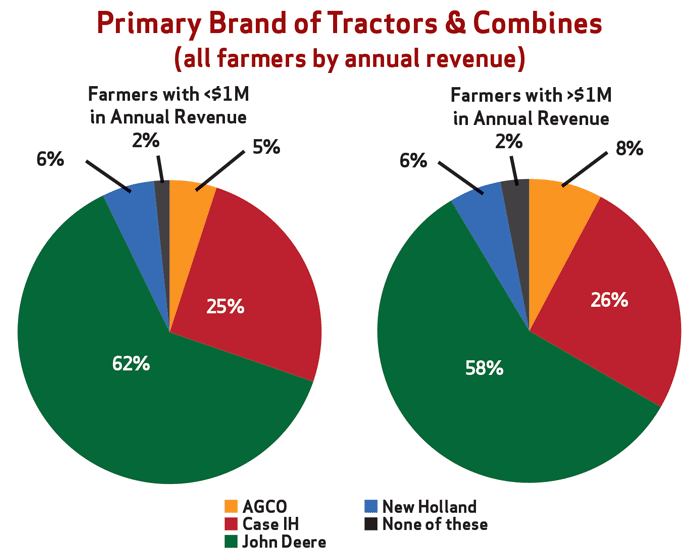 Breaking down survey respondents by revenue level did not significantly shift the percentage of respondents by equipment brand.
Source: Farm Equipment survey, June 2017

Brand Loyal or Not?

In response to the question, “Would you describe yourself as ‘brand loyal’ — purchase the same brand year-after-year — when you purchase tractors, field equipment or combines?” little difference was noted between the two groups. For the under $1 million group of farmers, 74% said “yes” and 26% said “no.” For the over $1 million group, 76% replied “yes,” while 24% replied “no.” This compares with the two groups combined, which were 75% “yes” and 25% “no.” 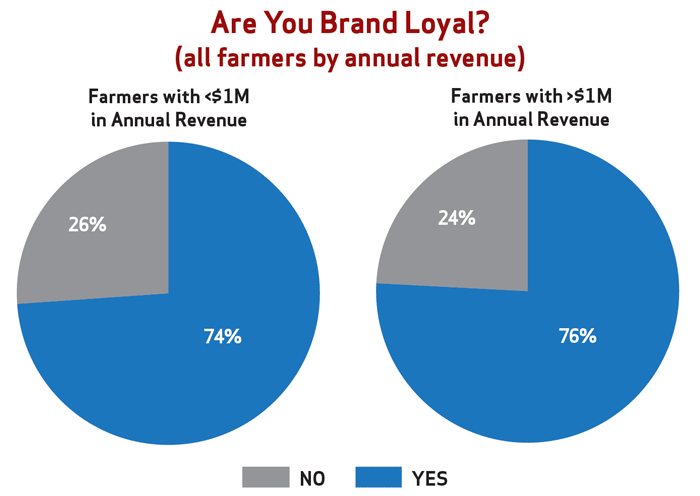 Farmers’ annual revenue levels (<$1M or >$1M) did not significantly impact their level of loyalty toward their preferred brand of equipment. In either case, about three-quarters said they were “brand loyal.”
Source: Farm Equipment survey, June 2017

In describing their “feelings about their primary brand preference today vs. 5 years ago, of those farmers in the under $1 million in annual revenues category, 18% said they were either “significantly more brand loyal” (7%) and “slightly more brand loyal” (11%). On the other end of the scale, 19% of the less than $1 million group reported being “slightly less loyal” (15%) or “significantly less loyal” (4%). The remaining 63% responded that they felt “about the same as 5 years ago.”

A glaring difference between those farmers with less than $1 million in revenues and those whose annual revenues exceed $1 million was when they were asked: “When you purchase new (not used) farm equipment, do you begin the process with the desire to purchase the same brand as your tractor/combine?”

Of those farmers who earn more than $1 million in annual revenues, 82% said they desired to purchase the same equipment as that of their tractors and combines. For those with less than $1 million in revenues, 74% said they started the purchasing process with the desire to acquire the same brand as their primary brand represented by the tractors and combines. 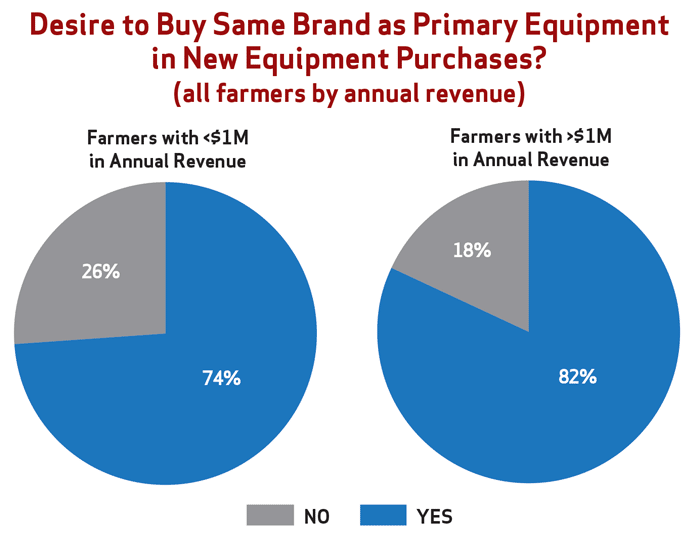 Some 84% of farmers in the >$1M annual revenue group say that when they begin their buying process they want to first look at their preferred brand of equipment vs. 74% in the <$1M group.
Source: Farm Equipment survey, June 2017

When it comes to equipment purchased over the past 5 years that did not match their primary brand, there were some differences between the two revenue groups.

The biggest difference (9%) came with precision farming equipment. More than one-third (36%) of farmers in the higher revenue range purchased precision gear that didn’t match the brand of their tractors and combines. This compares to 27% of farmers in the under $1 million group.

When it came to tillage equipment, some 53% of farmers in the over $1 million in annual revenues report buying different brands of tillage tools vs. 47% of those in the under $1 million category. 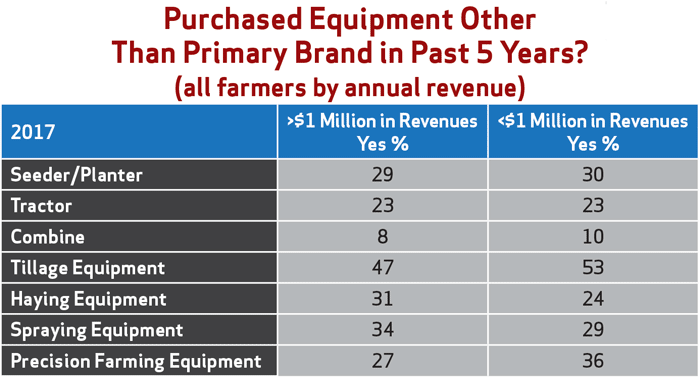 Confronted with the question, “Considering the decline in commodity prices during the past few years, has your attitude toward equipment purchases changed in that you are more willing to consider brands other than the one that you would typically prefer?” the difference between the two farmer groups was small. More farmers in the under $1 million of annual revenues would consider switching (51%) brands in the current low commodity price environment. On the other side of the revenue line, 48% of those earning $1 million or more in revenues indicated that they would consider other brands than the one they usually preferred. 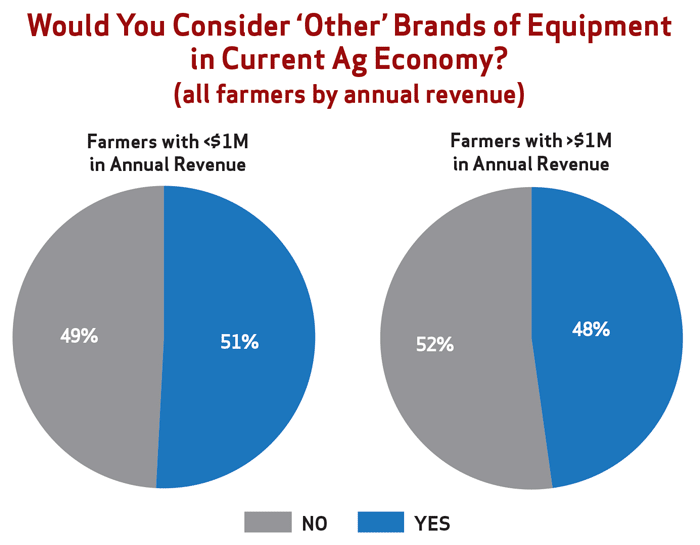 Considering the current low commodity price environment, slightly over one-half of dealers in the <$1M annual revenue cateogry say they would consider purchasing another brand of equipment other than their “preferred” brand, while 48% of those in the >$1M group say they would consider switching brands.
Source: Farm Equipment survey, June 2017

What Would Cause a Switch in Brands?

With the exception of some minor differences, the two revenue categories of farmers were pretty much on the same page as each other when it comes to the reasons to switch brands.

Number one on the list for the farmers who fall into the less than $1 million in revenues category was “Better parts availability,” followed by “Better product engineering” and “Better dealer repair/service.”

For those farmers with more than $1 million in annual revenues, “Better repair/service” from their dealers was ranked #1. It was followed by “Better parts availability” at #2 and “Better product engineering” at #3. 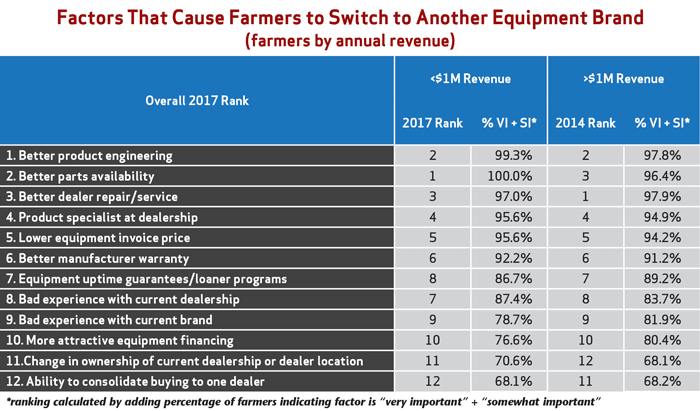 Based on the results of the 2017 brand loyalty survey, with the exception of a few minor differences throughout the survey, overall there did not appear to be any significant disparities between the two segments of farmers based on annual revenue. 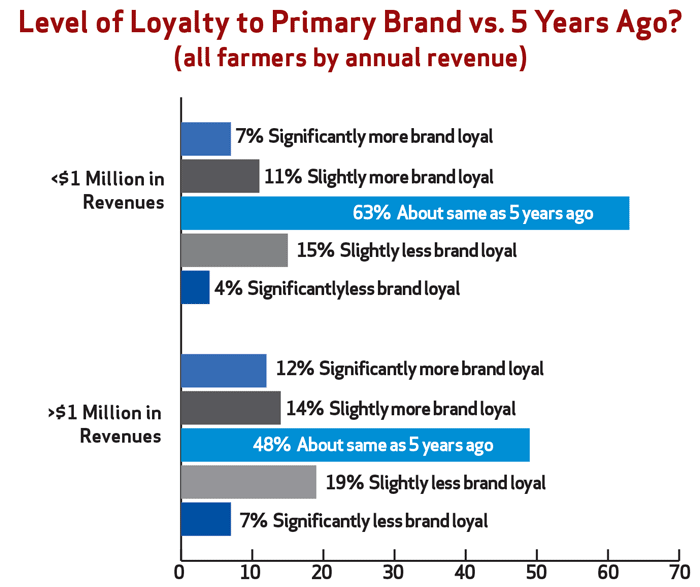 Most Farmers Still Loyal to ‘Their’ Brand

Brand Loyalty Part 1: Most Farmers Still Loyal to ‘Their’ Brand