An Aftermarket Business Running on All Cylinders

By John Dobberstein posted on February 7, 2011 | Posted in Dealers on the Move 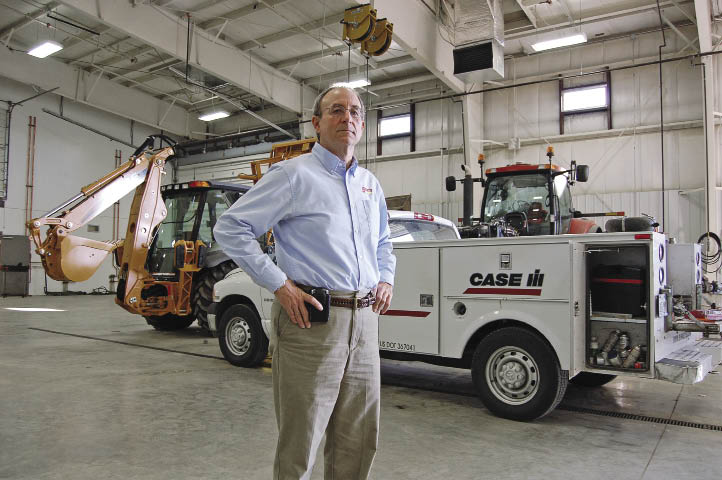 Years with Birkey’s: 20. (he was also a partner in another dealership as well as worked on the manufacturer side in setting up business systems at North American dealerships).

Role: “I work closely with all parts and service departments along with the store managers. Because of my background from the corporate side to the everyday retail side, I’m able to work with people, identify the problems and hopefully solve them. And if I’ve done things right, the next time around, they can solve it themselves.”

It may not be everyone’s dream job, but bring up numbers, spreadsheets, reports and benchmarks in a conversation and you’re squarely in Phil Fayhee’s wheelhouse. It’s well established that the real money in any farm equipment dealership is made in the aftermarket department, and Birkey’s is no different with a nearly 20% and 35% contribution margin in parts and service, respectively.

And Fayhee’s job is to see that the parts and service departments are a “well-oiled machine,” and continuing to run on all cylinders.

And it’s no small task in an organization that is constantly growing and running at break-neck speed most of the year.

Fayhee sets the performance benchmarks for each service and parts department at each dealership, and coaches the appropriate managers to improve output for those that are lagging. Getting the systems in place, and the necessary training and development is critical, as Fayhee can no longer give the same personal attention that he could when the organization was smaller.

Having been in the farm equipment business since he was 13, there’s little that Fayhee hasn’t seen. Soft-spoken but with a firm demeanor, he admits that the pressure is on to ensure all of the parts and service departments are profitable and growing.

His worries include not getting to a problem quickly enough or not having enough time to help department managers find a solution. A self-described “hands-on guy,” it’s difficult for him step back and wait for managers at struggling stores to deliver on the improvements.

“Where I become the most frustrated is when I identify a problem, lay it out and it’s not getting fixed,” Fayhee says, sitting in his office at Birkey’s new Bloomington, Ill., dealership.

“You put a lot of faith in the people you interact with. The store managers have to get what you’re telling them and they have to execute it.”

Measure It, Manage It

Like many other large dealerships, there’s a constant push to improve absorption rates, and Fayhee is in the eye of the storm.

Across all locations, Birkey’s dealerships billed about $30 million in parts sales and $14 million in labor sales in the most recent fiscal year, but there’s always room to improve. Across the Ag Div., Birkey’s absorption rate is 86%.

Birkey’s has a budget system that each store — and each parts and service department within those stores — is accountable to. In setting the budget, consideration is given to past sales and growth potential is evaluated. All factors are key to determining the final numbers.

The stores are involved in setting the budgets, and incentive payments are driven off of them, Fayhee says.

In the parts departments, incentives for parts managers are tied to counter parts sales, total parts sales and achievement of budgets. Parts employees have similar incentives.

On the service side, the service manager has an incentive tied to total customer labor sales, which includes what Birkey’s calls “CMI labor” for inspection and maintenance programs.

The new system accounts for unavoidable circumstances that might have prevented employees from reaching a certain level, and it keeps employees pointed toward improving their performance each year. “That system has been much more effective,” Fayhee says.

Rather than paying out $1-per-hour extra for each hour a tech bills, the company pays $2 an hour for reaching or exceeding 85% recovery, with the bonus increasing as the recovery rate goes up.

“So if you really want to get in and perform and hit it hard, you’re going to make way more than that individual that’s just doing enough to get by,” Fayhee says.

Birkey’s is hiring a full-time “parts and service sales manager” to help all of the stores improve incremental sales. According to Fayhee, the time has come for someone to focus on developing a marketing plan from “A to Z” for each store that will grow outside sales of parts and labor.

Fayhee says his job can bring a blend of different challenges, and no day is exactly the same. But on a typical day, Fayhee receives a series of reports from parts and service managers that he reviews with an eye toward sudden spikes in the cost of sales, margins or other important benchmarks.

Upon seeing anomalies, he’s in touch with the locations and addresses whatever is most pressing.

Because Birkey’s has committed to centralizing many of its functions, it’s Fayhee’s job to know if orders aren’t being received, or if parts are not getting on a shuttle and delaying a shop.

“Any hiccup can have a ripple effect. Not doing something in Store ‘A’ can impact 10 other locations. So it’s a constant balancing act out there,” he says. The key to managing all these moving parts is having a written set of procedures and standards and making sure employees adhere to them.

So what happens when a location is underperforming in parts and/or service? Fayhee sits down with the store manager and department manager to “dig into things and lay out a plan of how we’re going to fix it, then follow up to make sure it’s fixed,” he says.

During these monthly meetings, the group reviews financial performance, absorption rate and the store’s profit levels. Shorter weekly meetings can be used to discuss day-to-day issues that need attention before they escalate.

Fayhee says these meetings have become a priority in the past 2-3 years, especially with ag division and construction equipment division managers in place at the corporate level.

The main goal of these meetings is to get at operational problems and interdepartmental friction before they have a serious impact.

“No matter how hard you try — and whether it’s a single store or multi-store operation — there’s always a little friction between the parts and service departments. Regular meetings can keep those issues to a minimum and resolve situations before they escalate,” Fayhee says.

On the Run to Keep Things Running

Tips for Developing an Aftermarket Scorecard

Watching the Numbers, Keeping an Eye on the Little Things