By Darrell Bruggink posted on February 7, 2011 | Posted in Dealers on the Move 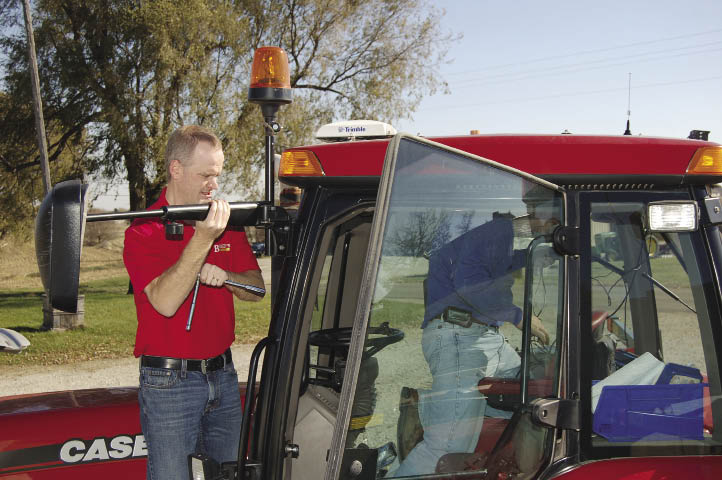 Years with Birkey’s: 5 (hired for his agronomic and crop science background).

Role: “Managing precision farming means knowing all the products and how to support them. I also put together customer training and information sessions and work closely with individuals at each store on precision farming products and support. Mine is really a support role, but in the off-season I get more involved with sales with some customers.”

It’s great when it’s working. But when it isn’t, it leads to a whole lot of frustration for the farmers that Darin Kennelly is trying to help.

That’s why the department that the precision farming specialist for Birkey’s Farm Stores heads up plays such an integral role. While farmers understand and even accept “iron” breakdowns, they’re incredibly frustrated when the tractor and planter or strip-till rig is working but GPS isn’t.

“More and more farmers want auto-steer and they need to know the dealer is going to support it. The dealer must not only know the product line, but also to be able to support that product in the field.”

In his role, Kennelly manages a staff of 10 precision ag sales specialists across Birkey’s 11 stores. While each store manages its own precision sales, Kennelly consults with the stores on the tools the customer ought to purchase based on what he wants to accomplish.

His primary role is to assist each store in troubleshooting problems in the field. If consulting via phone doesn’t solve the issue, he’ll head out on location himself — even if several hours away. Most of the time, he isn’t met with smiles when he arrives on location. But by solving problems, he and his crew are instrumental in building long-term relationships between Birkey’s and growers.

“In a lot of ways, I put out fires,” says Kennelly. “By the time I get there, often times the problem has escalated into a big problem. During the busy seasons when farmers are in the field, that’s a lot of what we’re doing.”

While GPS and other technologies are no longer new tools, they can feel “new” to the first-timers. While fertilizer dealerships were the first to embrace precision technologies, equipment dealerships were slower to react because it’s so different from the iron they’re accustomed to selling and servicing, he says.

It’s important, however, for equipment dealers to be proactive in learning precision and bringing specialists on board, he says. Many farmers either are intimidated by precision technologies or don’t have the time to learn to use them to their fullest capabilities.

“Farmers want the benefits of this technology, but it’s beyond what many can grasp, understand and support,” he says. “It’s a full-time job for me. The farmer has a lot more responsibilities so he doesn’t have the time to understand how this technology works.

“Support is the biggest thing an equipment dealership can offer. The farmer needs someone who can fix it if it goes bad, even more so than other equipment. Tractors are becoming more complicated, but a lot of farmers know how to work on them. With GPS, the first time they lose it, they’re calling because they have no idea what to do.”

During a day traveling with Kennelly, we observed him answering technical support questions via e-mail; taking calls from specialists at other Birkey’s locations; heading to a farm to set up a new GPS system and check on signal strength for a strip-tiller; and troubleshooting a problem over the phone with a colleague for several hours away.

We learned 10 things from Kennelly that day are helpful in maintaining, operating and managing a precision technology department:

While you can find people with good technology skills, Birkey’s decided at the onset that it needed someone with agronomy knowledge. “Birkey’s wanted somebody who could relate to the farmer and understand what he was trying to accomplish,” Kennelly says.

At the same time, he said it’s difficult to push somebody into a precision role if they aren’t excited by the technology. “We’ve tried that, too, and it usually doesn’t work.”

2. Develop a Structure. Multi-store dealerships need a central manager, along with individuals at each location who focus on precision sales.

When Kennelly started 5 years ago, he managed all the stores, but was challenged because stores didn’t have staff who understood the technologies. “As the adoption rate grew, we decided every store needs a specialist that manages this part of the business,” he says.

3. Training is Critical. Kennelly says dealers must be prepared to train and spend time with new hires to get them up to speed. He employs customer clinics and training from suppliers like Case IH, Trimble and Ag Leader.

“We conduct information sessions for customers and a variety of training sessions at each store,” says Kennelly.

Because there are few candidates that can bring a lot of experience, you must make the time for them.

4. Assign a Go-To-Guy. Make sure each store has somebody who can make service calls for precision technology products and systems.

“Not all of our stores have someone who is 100% dedicated to precision technology all year-round, but each store has someone who knows the precision products and can support them,” Kennelly says.

5. Agile Learners. You need precision specialists who have the ability, willingness and patience to learn on the go. If not, says Kennelly, it’s easy to fall behind because the technology changes so rapidly.

“You must be willing to get involved in situations where you might not know the answer; that you’re going to face a problem you have no idea how to fix and you’re going to figure it out. There’s some bravery involved.

“A couple weeks ago, a grower called who was interested in something that I’d never dealt with before. I took the time to research it and found the information, and we met and talked about it. Be honest and tell them if it’s something you haven’t seen before. Tell them what you know and find out what you can.”

6. Perfect Your Phone Skills. You need the listening and questioning skills to talk a colleague or a grower through to the solution over the phone. We saw this firsthand during a 30-minute drive to a farm for an onsite fix.

It’s not unusual for Kennelly to log 10,000 cell phone minutes in a busy month. “For the first 2-3 years, most of my calls were to customers. Now, most of my phone calls are to stores — which is good. I want the stores to handle the problem. If the farmer is calling me directly, then the people at the store supporting the product don’t learn.”

7. Difficult to Quantify. It’s difficult to put numbers on the value of the precision specialists to Birkey’s overall efforts. You can’t be lulled into thinking you’re doing your job if the “complaint department” has few visitors.

“If you’re not taking care of the customers, they’ll tell you and the stores will tell you,” Kennelly says. “I need to track our precision farming business and if it starts falling off, I start to think about what we may not be doing.”

8. Communications & Sharing. Precision specialists need to communicate with each other, particularly on problems they’ve encountered — and their solutions.

“Nothing is more frustrating than spending all day to determine a specific problem only to find out another store had, and solved, the same problem a week ago,” Kennelly says. “Communicating can save you a whole day of work.

“There’s growth that needs to occur — a knowledge base — and we rely on each other to solve problems. If somebody has a problem they can’t solve, I may be able to direct them to a store that has dealt with the issue.”

9. Patience & Persistence. The general “newness” of precision technology requires specialists to deal with the many unknowns that arise daily.

“If you’re going to hire somebody to head up your precision department, they need an even temperament,” Kennelly says. “Patience is essential when you’re talking about problems with precision farming because it can take 5 hours to find the problem and 5 minutes to fix it.”

10. A Mindset Change. Kennelly says management must realize the importance precision technology plays in agriculture today and look beyond the “iron-only” mentality that resulted in dealerships reacting so slowly.

“Precision specialists can’t succeed without the top-down support at the store,” Kennelly adds. “Management must be on board with what’s going on and all of the people underneath them must be equally involved and engaged with the process.

How To Sell: Demonstrating Rock Pickers