How To Sell: Demonstrating Rock Pickers

Dealers should make an agreement on price before demonstrating a new rock picker in the farmer's field.

Besides geologists, no one knows rocks as well as a farmer. Not only are they a constant source of irritation, they can cause enough damage to farm equipment to halt crop planting and harvesting.

Dealers should demonstrate a new rock picker only after discussing what the farmer expects from the machine, as well as the price he’ll pay if it works as promised. This rock picker engages the soil with a 60 inch wide grate, filling the 2.5 cubic yard hopper at 4 mph with rocks ranging in size from 2-27 inches. Rock pickers such as this unit weigh 4,970 pounds and are matched to a 75 horsepower tractor.

As the glaciers disappeared from North America more than 10,000 years ago, the melting ice left rocks scattered across the landscape. Called "erratics" by geologists, these rocks stayed on the surface or were gradually buried by silt. When the glaciated regions of northern U.S. and southern Canada were being settled, farmers found fertile fields were often covered with boulders that had to be hauled away and in some cases blasted into smaller, more manageable pieces.

While many of these rocks used as fences or foundations, others were piled up in corners of fields. But every year, farmers found themselves removing rocks from the same land. The rocks seemed to grow wild across the countryside, wreaking havoc on horse-drawn tillage implements. There's a strong chance that those same fields are "sprouting" rocks to this day.

The 640-acre farm in Manitoba where Glenn Horyshen grew up had two 40-acre plots that needed to be constantly cleared of rocks. "Year after year, we'd clear the field by hand. Then, we'd cultivate down 6 inches and bring up more rocks."

These days, it's harder to find kids who will pick rocks by hand. Fortunately, thanks to the rock picker, a specialized implement developed during the 1960s, farmers can move enough rocks with one person in an hour what ten used to do in a day.

Rock pickers are a luxury for some and a necessity for others, says Horyshen, who was owner of Kelsey Farm Equipment Ltd. in Swan River, Manitoba. In December 2010, the dealership was acquired by Mazergroup Ltd., and Horyshen stayed on as sales manager of the Swan River store.

It may be difficult for some farmers to see how they'll make money with a rock picker, but in rocky fields it can save wear and tear on tillage equipment and allow the combine operator to run through the field faster, as he doesn't have to worry about keeping the header above the rocks.

"When a combine picks up a rock," says Horyshen, "a farmer could instantly have $30,000 worth of damage and be done for the season."

Rocks climb to the surface of fields in the northern portion of North America because of the freeze-thaw cycle. When the soil freezes, ice crystals form under a rock and push it upward. When the soil thaws, ice around the rock melts first, allowing mud to seep into the void left by the ice. Depending on the weather, the process may be repeated several times a year, pushing rocks to the surface at a rate of a half-inch per year. Tillage equipment speeds this natural process up, depositing long-buried rocks on the surface.

Many farmers use land rollers to quickly push rocks back into the soil, but in most cases they're used only to quickly prepare a field between years when the rock picker, a slower process that covers up to a 17 foot swath at 2-4 mph, is used. 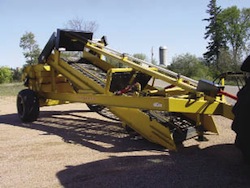 For deep rock removal, subterranean pickers extract rocks up to 24 inches in diameter that are buried 2-12 inches down. This model features an adjustable depth steel digging blade and conveys rocks to a hopper.

Driven by higher commodity prices, and in some cases the loss of farmland to urban sprawl, some farmers are planting on ground that has not been farmed for years because there were too many rocks to make it profitable. Rock pickers, available from a number of shortline manufacturers, are getting more attention.

However, much like offering snow blowers in the south, they won't make sense for every farm equipment dealer. "Certain areas of North America don't have a problem with rocks," says Horyshen. "In other regions, a rock picker won't see a lot of hours and will work for a farmer for more than 20 years."

"We offer a single line and don't keep any of them in stock. A farmer who has a rocky field will visit the dealership knowing he needs a rock picker," says Horyshen. "You're not going to talk a farmer into a rock picker if he doesn't have rocky fields.

"Rock pickers aren't an emergency item, either. Farmers know they've got a problem with rocks and buying one is a pre-planned purchase. They can usually wait for one to be shipped from the manufacturer." 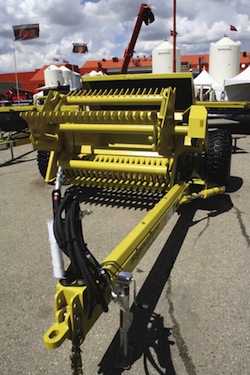 Steel excavator tips on the rock grill of this rock picker provide long-wearing protection. Rock pickers were first made 50 years ago, and some of the original units are still working.

Still, dealers who get requests to demonstrate the implement on a prospective customer's field should proceed with caution. "If you're going to take a new tractor and a new rock picker out for a demo, you've got rocks in your head," says Horyshen. "I'd never do that with a rock picker, as it's usually not worth our time and effort. Not only will the farmer get his field picked for free, it turns your new picker into a used unit. If that farmer doesn't buy that day, your next customer will want it for less money."

Once a few farmers own rock pickers in an area, word-of-mouth will help sell the rest. Most farmers have an idea what rock pickers will do for them. However, for dealers taking on a new line, a few product demonstrations may be unavoidable.

"A lot of people would love for you to demo a rock picker for a day," says Steve Schroeder, area manager (Michigan, Indiana, Kentucky) for Kongskilde Industries. "But you don't want to spend all day in clearing a field and have the customer realize he doesn't need to buy one now."

The dealers who do their homework upfront will typically realize a higher take rate. "I recommend my dealers work with the farmer on a price after talking about what the picker will do and what the farmer expects, and before taking it out to the field. Then, run the demonstration for no more than two hours."

Schroeder also recommends that dealers leave the machine hooked up to the farmer's tractor, for a few hours or even overnight.

"I'll often hold a demo in the morning, and then we'll go out for lunch and leave it hooked up. I've found if we unhook it right after the demo and take it back to the dealership, the take rate is lower. It's out of sight, out of mind. But if that machine's still sitting behind his tractor and there are 50 acres of rocks yet to clear, it's hard to let it go."

Part of the negotiation upfront should consider any possible trades. Because of the specialized nature of rock pickers, Horyshen cautions against taking in used machines. "Rock pickers don't get a lot of hours, and the ones that do will be worn out. Rock pickers don't cost a lot of money compared to other implements, so there's not much of a market for a used picker."

How To Sell: Making Tracks Work for Your Dealership

How To Sell: Making a Case for the New Corn Heads

How to Sell: Strip-Till Equipment