Although millennial growers may have different goals or approaches than farming veterans, they still want the same thing: excellent customer service and functionality.

As more young farmers are stepping into decision making roles in family farming operations, dealers will have to adjust how they interact with millennial customers. This will mean a shift in approaching customer service, communication methods and relationship building.

“When I started, my father-in-law had been farming for 35 years,” says Armstrong. “He was at the tail end of his career and had worked to reach a certain level of efficiency with nicer and bigger equipment. Right about that time, there was also some of the best farming revenue that anyone had ever seen. So, I got used to a certain level of comfort.”

Now, Armstrong is rethinking how he looks at equipment, but he still sees equipment as one of the “most fun” parts of farming.

“I like trying new things and always try to improve efficiency,” Armstrong says. “If it takes way too long to plant, spray or harvest, I’m thinking, ‘what can we do differently? What equipment can make that process go more smoothly?’”

Older Equipment Gets the Job Done

Jason Mauck operates his 3,000 acre family farm near Gaston, Ind., where he grows corn, soybeans and wheat. Mauck took over his father’s role in the farm in 2010, and works with his two uncles, grandfather and a cousin. Mauck runs Caterpillar 4 4WD tractors, a Deere 680 combine, a Deere tractor with front wheel assist, a Hagie DTS10 sprayer, 2 Sunflower soil finishers, an older disc, and 2 chisel plows. Mauck works with Reynolds Farm Equipment, a John Deere dealer in Muncie, Ind.

“All of our equipment is between 10-15 years old,” Mauck says. “We’re very far behind on technology because it’s impossible to implement anything new that my grandpa has to run. He’s very emotional about trips across the field.”

That means that Mauck is planning to wait a few years before changing the direction of the farm, since every equipment purchase ties him down to the same system.

Hora says he mostly assists his father on equipment decisions, identifying where to improve, where technology can be brought in and how to better utilize equipment. 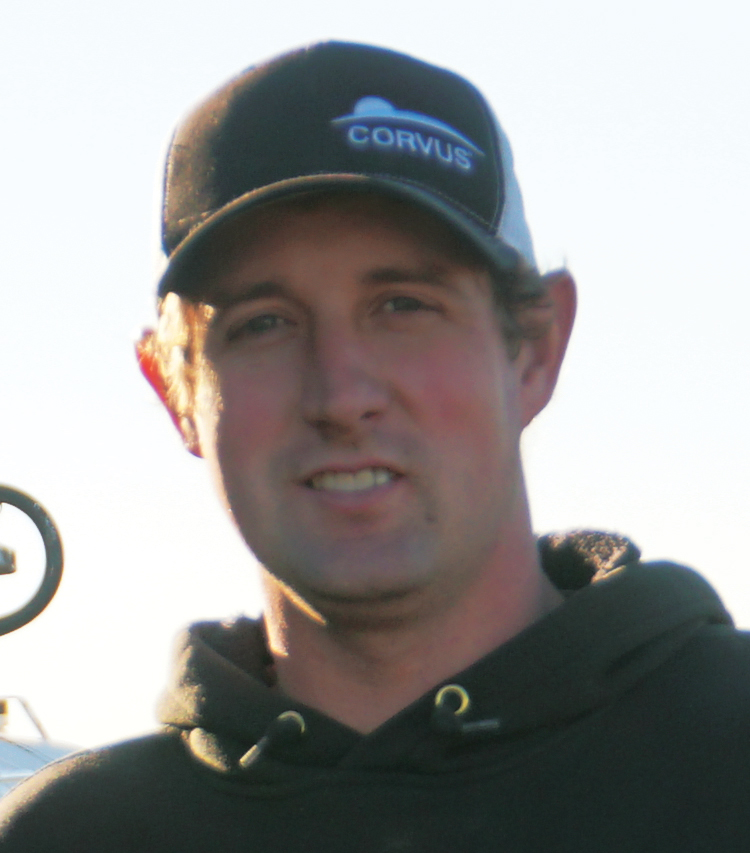 “If it takes way too long to plant, spray or harvest, I’m thinking, ‘what can we do differently? What equipment can make that process go more smoothly…” – Chris Armstrong

“You don’t have to have all the latest and greatest everything,” Hora says. “We buy everything used — at least a few years old.”

For Hora, being able to have options for planting conditions and opening up other windows at harvest, planting and fertilizing time to utilize technology and collect data is more important for short-term data management and connecting with customers.

“If our equipment is unfixable within a reasonable time frame, they help us get something to rent or use; they run parts out after hours; and answer phone calls after hours,” says Armstrong. “We’ve tried adding other dealerships or lines of equipment and just not had the same level of service.”

Armstrong’s father-in-law shaped a lot of his opinions, especially in the beginning. Those high expectations have molded what Armstrong has come to expect from the dealers he works with.

“The level of service we receive from the dealer does influence what brand of equipment we buy,” Armstrong says. “We have to think about not just who sells the equipment, but who is going to support it. We bought a Miller Nitro sprayer from Platte Valley Equipment, even though it’s not a John Deere product.”

“It’s nice that my dealer can get parts to me the next day, if they don’t have them on the day I need them,” Mauck says.

“They work with me on replacing things. It doesn’t matter which brand we’re working with, the price of a farm visit is getting out of hand. Even if they come out and air up a tire for you, it’s going to be $500. That’s a challenge.”

“My expectations of our dealer are somewhat different from my dad’s,” Mauck says. “He thinks everyone is out to get him, while my cousin and I put more value on fixing problems before they get worse.”

Mauck adds that he doesn’t want to work with multiple people if he doesn’t have to.

“We have a redline dealer up north, and we just don’t use them,” Mauck says. “We go to our local John Deere dealership instead.”

“When something goes wrong, I’m not always the one to call them,” Hora says. “I call when the 20|20 monitor isn’t reading recommendations, or the GPS isn’t working. Those are the dealer issues I’m calling about — making the technology work.”

Brand loyalty is easier for Hora when all the equipment is the same brand and they’re able to work with the same person from the dealership.

“Using the same brand across all the equipment, the controls are the same — it makes it easier when it’s consistent,” Hora says. “If that’s what we’ve always used, we’re comfortable with it.”

“There’s still a learning process between the two,” Hora says. “Each time I get in a John Deere, I have to do a quick crash course on how to run it, because it’s just a little bit different. The functionality is a little different each time.”

Renting equipment is definitely something Armstrong wants to look into, especially if a grower’s situation means they’re always going to have a payment or are continuously paying for repairs. However, Armstrong says he’d rather own his own equipment.

“If you’re not going to ever own it outright, or by the time you get it paid off, it’s time to upgrade or move onto something new — in that situation, then yes, renting would be something to consider,” Armstrong says. “You would always get to use something that’s new with the best technology. It would be appealing to get to a point where you don’t have those payments all the time, if you could ever get ahead.”

Mauck says he would be interested in renting a combine. As operators get older, more accidents happen, and Mauck says that the more their operation does, the more equipment gets torn up.

“When you get down to the cost of having higher tech stuff, it’s pretty expensive,” Mauck says. “It’s hard to optimize equipment if they could have trained people charging a fair amount per acre.”

Mauck says that in certain situations, like relay cropping, it would be advantageous for 5-10 farmers to share equipment costs.

While Hora says he is open to renting equipment, he says that for him, the biggest issue is needing to rent the equipment at the same time as everyone else in his area. 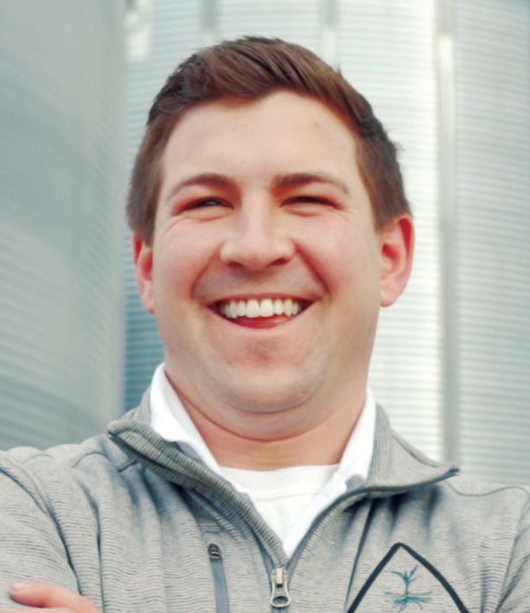 “I call when the 20|20 monitor isn’t reading recommendations, or the GPS isn’t working. Those are the dealer issues I’m calling about — making the technology work…” – Mitchell Hora

Armstrong adds that right now, autonomous technology is simply too cost prohibitive for their operation, but he doesn’t want to bet against the technology.

“As labor gets tougher to find and as technology becomes more feasible, it’s a possibility,” Armstrong says. “There are some things we just have to experience for ourself. When you think about how powerful the processor between our ears is, it’s hard to imagine replacing a person with technology. However, people get tired, have to eat and aren’t perfect.”

Mauck says he’s all for autonomous technology and has worked with Purdue University to build a small autonomous tractor for their operation.

“Especially with intercropping, autonomous will be a huge asset to eliminate the need to go over the rows when you can go in between them,” Mauck says. “In the future, I think there will be small harvesting equipment that threshes on the end rows. I’d rather have 100 $5,000 pieces of equipment.”

Another iteration of autonomous technology that Mauck predicts will be a game changer will be the integration of autonomy to moving animals as part of a regenerative ag grazing system.

“That’ll be huge. That’s the missing link to make no-till organic work, is if we can move the animals through a system,” Mauck adds.

Precision ag technology quickens the pace of equipment upgrades faster than would need to be done otherwise, Armstrong adds.

“If the payment is similar to what you’re already paying, but not extending the life of the loan, then it would be nice to add those extra features,” Armstrong says.

Precision also plays into Armstrong’s relationships with the local dealers.

“For whatever reason, John Deere and Platte Valley Equipment have precision rate controllers and guidance systems that are heads and tails above what anybody else has to offer,” Armstrong says.

“I recognize that other brands are good, too, but John Deere and Platte Valley are just better at servicing those pieces.”

Hora says that growers don’t have to have the latest and greatest iron in order to have updated technology, sensors and precision equipment to get data really dialed in.

“It’s always good to maintain it, because stuff breaks down and won’t last forever,” Hora says. “I believe the best piece of equipment should be a planter, especially if you’re doing anything around soil health or sustainable ag.”

Hora says that he works with a lot of new precision ag technology companies testing up and coming tools, so he doesn’t expect all the kinks to be worked out of those.

“We want to work on beta testing new technology,” Hora says. “But when it gets to the dealer level, it needs to be fully functional.” The OEM-Customer Relationship in Ag: What Growers Want