As customer demographics and equipment trends shift, don’t be afraid to shake up your business model.

The last few years have been marked by notable changes in the ag market, including increasingly stretched farm income. As dealers face a changing market and customer base, the question becomes: what are the next steps? Kenneth Zuckerberg, lead economist and sector strategist for grains and farm inputs at CoBank, a national cooperative bank operating specifically in U.S. agriculture, shared his thoughts at the 2020 Virtual Dealership Minds Summit on how dealers can change up their game plans to stay strong in the face of uncertainty.

The impact of the COVID-19 pandemic will play a serious role in the changes dealers make to their businesses. “The current economic downturn will linger, in our opinion, for a number of years,” he says.

He points out a lingering downturn will put even more pressure on farm income, which even outside of the pandemic has struggled since reaching a peak in 2013. Total net farm income is forecast to reach $110 billion in 2020 according to USDA data, down from the $120 billion forecast in 2019 and the nearly $140 billion reported in 2013. At the same time, farm debt is projected to reach around $425 billion in 2020, nearly on par with levels seen during the 1980 farm crisis.

Zuckerberg notes there are signs of a modest economic recovery in the U.S. as the country re-opens. He points to the Oxford Economics U.S. Recovery Tracker as a realistic, gradual representation of the economy’s recovery. “Only a gradual recovery in the real economy is underway,” he says. “This is threatened by a spike in new COVID cases, especially in places that re-opened too quickly and did not follow social distancing and other protocols.” 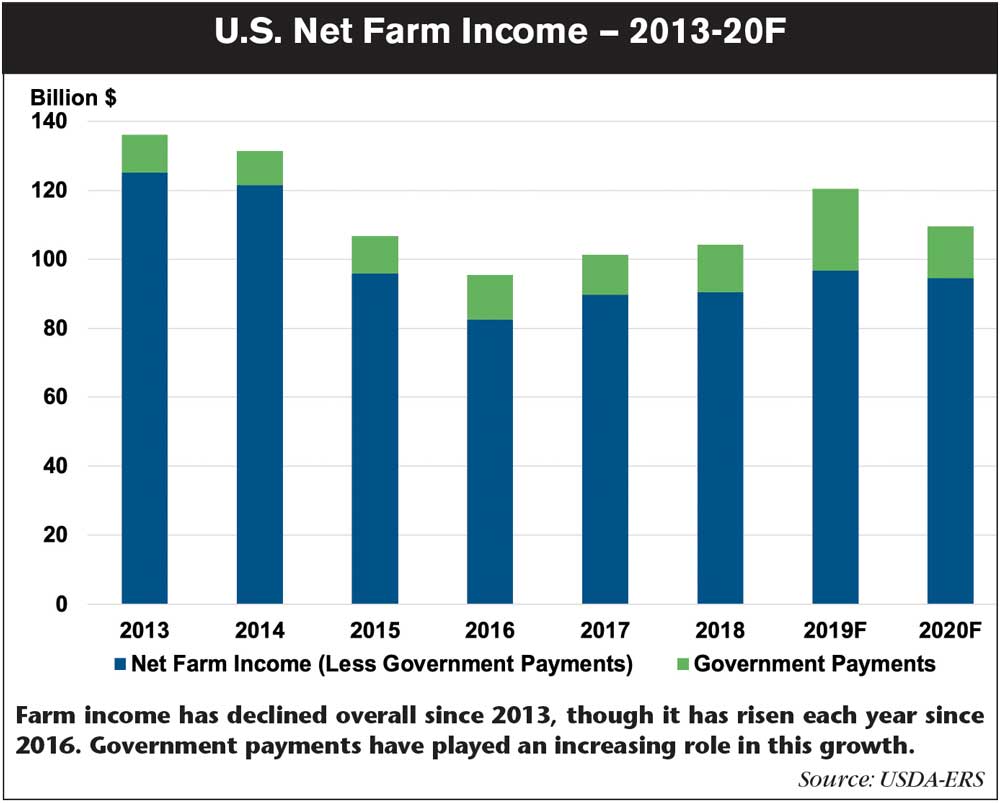 As Zuckerberg sees it, dealers have 3 strategic options when looking to adapt to the changing market and address the pressures their customers are facing.

Zuckerberg first recommends dealers buy/consolidate with other dealerships. “Consolidation is a natural response to difficult operating conditions,” he says. “Through M&A, you can achieve revenue synergies through the acquired book of business and save on operating expenses.”

The second is to expand their offered services to include things like precision farming or custom applications. Precision farming services in particular offer dealers a way to tap into a growing need in the market. He sees potential for dealers to take a more educational and consultative approach with this technology to help their customers better understanding the value precision technology offers.

“I would argue adoption of precision in the farm industry has been slow,” he says. “Part of that is because, on average, farmers don’t have a lot of money right now to spend on things they don’t understand. There’s a lack of rural broadband access, as well as a tendency for farmers to be wary of new ideas and products. The opportunity for dealers is that growers still need somewhere to go for advice and to learn from someone they trust.”

Zuckerberg sees a world in which dealers hire non-ag data experts to work with growers and coach them on understanding what they can accomplish with precision farming. He calls it “low hanging fruit” for dealers, even as equipment buying trends more to the used side.

“We see that growers are trading down on tech and buying more used equipment,” he says. “But equipment that’s been in the field the last 5 years probably already has technology on it that growers haven’t even begun to use. I’d say the precision opportunity is very valid.”

Another service he feels dealerships are particularly well suited to provide is custom application, which he argues is a natural extension of equipment sales.

“Employees in the dealership usually know just as much about farming as their customers, which makes them even more valuable,” he says. “They can add value in spraying, field preparation or even assisting customers with harvesting.”

Zuckerberg’s third option for dealers is to focus on innovation and pivot their business model to something new. 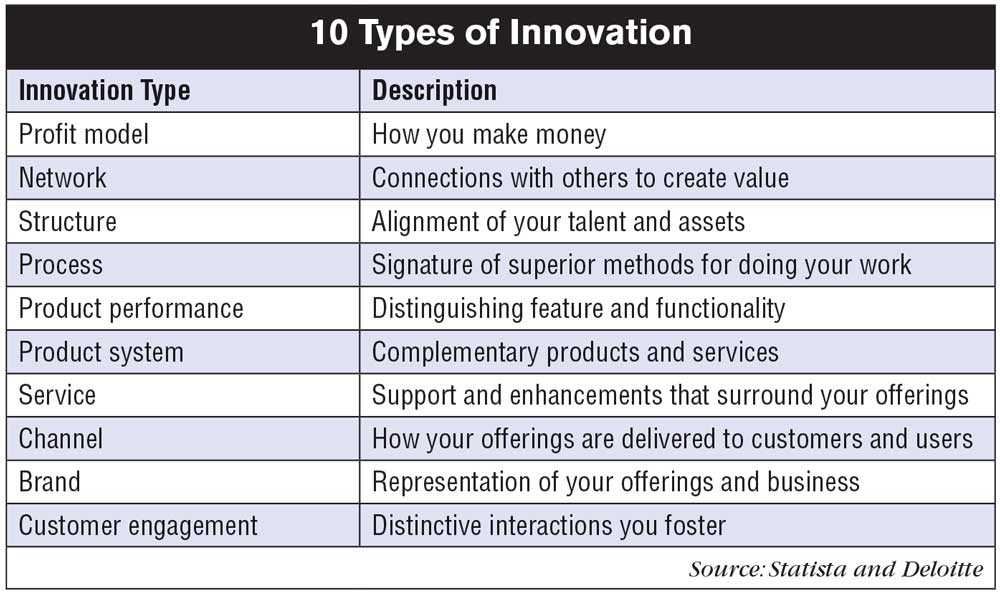 Zuckerberg lays the groundwork for innovation by giving 10 ways dealers can change up their business. Some examples include expanding sales through connections with others or improving process efficiencies.

He evokes Home Depot when discussing ways dealers can change up their service models. “When I go to Home Depot, they have staff who are extremely helpful given that I do not know everything about home repair,” he says. “This creates a different form of thoughtful customer engagement that puts emphasis on customer education and service, which can work to change your brand as a service provider.”

He also addresses how dealers can shake up what they offer, saying, “A dealer’s ‘channel’ encompasses how your offerings are delivered to customers. If you have customers who are new to farming, the model of the dealership may place more emphasis on the education component of customer service. This could be training for your customers or providing staff who come out to operate more complicated machinery.”

He recommends dealers first examine the forward-thinking nature of their business before looking at which innovation process fits them best. “It is critical to ask if your business looks to the future or defends the past,” he says. “If there was one question a board of directors should ask in a strategy session, this is it.” 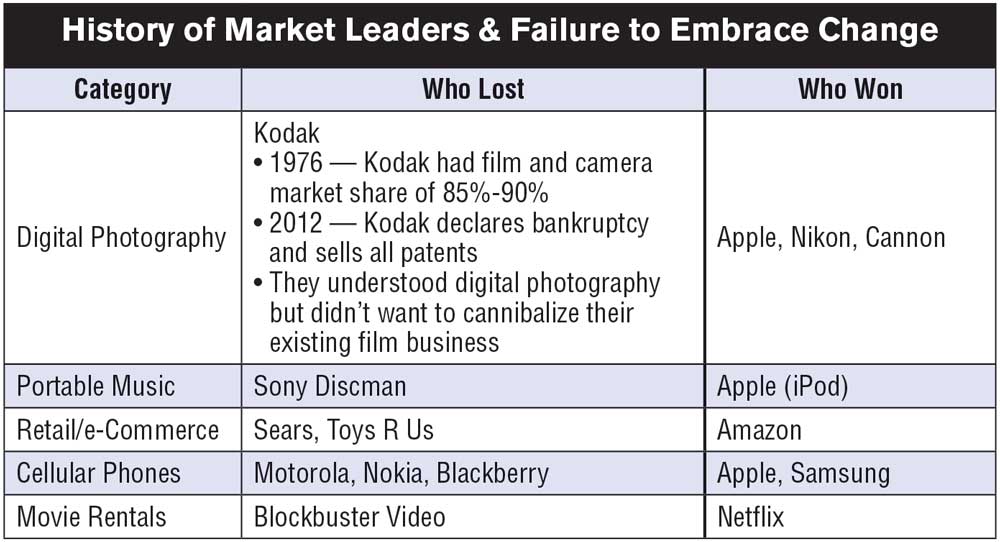 He gives examples (see table above) of businesses that became market leaders only to fall by the wayside without a forward-thinking business model. He mentions Kodak going from its 85%-90% film and camera market share in 1976 to declaring bankruptcy in 2012, as the perfect example of failure to adapt to a changing market.

“Kodak understood digital photography better than anyone,” says Zuckerberg. “But they didn’t want to cannibalize their existing film business. So they lost, initially to Nikon and Cannon and later to Apple and Samsung.

Zuckerberg sees fuel-efficiency and autonomy as areas dealers can look to in keeping their business future-focused. He specifically sees them as disrupters in the trend of purchasing larger tractors.

“The trend has been to buy bigger, higher horsepower equipment,” he says. “But now John Deere is advertising tractors that handle the same workload with 20% more fuel efficiency. If you can do the same job with less horsepower, that’s less fuel and pollution, which is good for everyone.

“Another dynamic would be autonomous tractors. There’s a business case for having multiple self-operating tractors instead of one big tractor. It could eventually be the new paradigm to have 3-4 autonomous tractors operating at night vs. driving one large tractor all day.”

Zuckerberg also recommends dealers look at getting into the crop inputs distribution business as a way to increase their value. The pressures in ag input retailing and the equipment dealership business are similar, he says, creating incentive to combine the two. “While some people may call this crazy,” he says, “I tend to be the guy that looks beyond asking ‘why’ and rather asking ‘why not?’” Zuckerberg sees an opportunity for dealers to tap into the success retail stores have seen in combining equipment and input sales.

“We saw after the 2013 downturn that farmers stopped buying equipment, then skipped fertilizer applications, then switched to cheaper seeds,” he says. “When times are tough, dealers and input retailers face similar pressure.”

He mentions that input retailers have their own unique challenges to face. “The agrochemical and seed suppliers have gone through their own wave of consolidation,” he says. “What we’re increasingly seeing is those suppliers selling more directly to farmers. That’s happening while economic pressure is continuing to force consolidation of farms, which creates bigger operations with more buying power. These forces seem to be coming together and force buyers to question the value proposition of intermediaries.

“Look at the success of Tractor Supply. Why couldn’t a dealer put these two businesses under one roof and benefit from having one brand service multiple needs for the farmer?”

Learning Through the Growth Stages of a Dealership