Part 3: Case IH explains its new communication initiatives, and how its re-energized Dealer Advisory Board assists in decisions.

Editor’s Note: This is the third in a series of articles based on an over-lunch interview with Case IH’s North America’s Jim Walker, Vice President, and Melinda Griffin, Director, Network Development, at the headquarters offices last fall in Racine, Wis. The first article in the series focused on a new Sustainable Growth plans rolled out to dealers in early 2017 and the second article explained the logic behind the new volume incentive changes.

When Lessiter Media acquired Farm Equipment magazine in 2004, editors quickly learned something about its equipment dealer audience. That is, dealers could be madder than hell at their mainline OEM; in fierce, outright opposition to the edicts of the Mother Ship. But when in front of the customer, many will defend and be willing to die on the hill for the brand they represent. It’s not color-specific thing, it’s just the way it is in this business.

To borrow a sports analogy, that might be called loving the game, but hating the coach.

That dynamic was explored in the headquarters office with Case IH North America’s Jim Walker, vice president, and Melinda Griffin, director, Network Development, during a discussion of some of the frustrations shared by Case IH’s dealer network, including the Dealer-Manufacturer Relations Survey released by the Equipment Dealers Assn. last summer.

When asked of the love/hate relationship that can exist in the business, Walker, a veteran executive from several of the big manufacturers, raised an interesting point. He pointed to John Deere, who was as aggressive over the last decade in evolving its business and changing its dealer network as anyone. “If you look back at some much earlier Dealer-Manufacturer Relations surveys, Deere didn’t fare as well as they do today. And yet they’ve evolved their business and distribution network and got changes in ownership to drive what they prioritize. And today they’re top ranked (earning the top mainline position in the most recent EDA survey).” Walker says that annual surveys like these reflect the evolution of a manufacturer and distribution network over time.

Changes are necessary to obtain a strong distribution network, even if some of the dealers fight some of those changes at the time.

Recognizing the low Case IH score in “Communications with Management” in the Equipment Dealer’s Assn. Dealer-Manufacturer Relations Survey last year, Walker points to some initiatives that were launched in 2017 as part of the new Sustainable Growth Plan; including some planned-for things that had not yet been put into action before last year’s survey period.

Each quarter, Walker now releases a “Direct Line” newsletter to his dealer-principals. “I try to put in perspective what I see going on during the upcoming quarter — what’s the industry looks like, what we’re trying to do and how that affect the dealers and benefits the dealer.” He asks for responses with concerns and questions, and receives direct emails. He notes that it’s a communication for dealer-principals only, not distributed to the rank and file.

In terms of face-to-face communications with dealers, Walker says he’s personally in the field one week per month and into every one of his 6 regions twice a year, something his management team also is doing to support the field reps working with the dealers. “We’re out there, we’re visible and I think we’re an accessible management and leadership team. I think the EDA survey was more a sign of frustration than a true relationship problem with our dealers — there are so many avenues of communication out there. I think dealers were saying ‘please understand what we’re going through and help us get through it.’ And that is our role as we continue the ag industry’s model of interdependency.” (For more, see the first article).

Another OEM that scored poorly in the EDA Survey indicated that their own dealer satisfaction data collected several months later — after a successful planting season — showed a far more positive outlook. Walker did not challenge the survey data in that way, however. In fact, he says an OEM survey can often be even more candid and with a stronger tone than what that will end up in the public’s hands.

“We knew the disconnects. We didn’t need to wait for the survey to come out to know what our dealers were thinking. It’s just the level of a degree, whether they score it on the grading system.”

A scorecard that’s down in so many categories is meant to send a message, Walker says. “You can’t be that bad on everything. So, we took it to heart, that the dealers meant it. We knew we had a tough road to hoe with some things we were doing to position ourselves for the future, while dealers were asked to evolve and get engaged into a new way of business in a new economy.” And with a product and dealer network so heavily influenced by the rise and fall of the cash crop business, Walker says his dealers weren’t able to see change a fast as competition in some cases.

"This is just a business situation for our dealers; the brand loyalty report shows that they’re not backing off on who they need to be in the marketplace."

“Right or wrong, I still say Case IH has the second-best dealer network in North America — and first in some locales — and we’re proud of it. We just need to make sure that they hold their own and continue to grow.”

Walker says while EDA has been helpful, he thinks the association’s survey has more value as a trend indicator. He had done his homework on it. “On all 12 of those categories, we peaked in 2015, which was the 2014 business year. Now, after years of a significant cash crop decline, there’s been a more adverse effect on our dealer network. So yeah, I think 2017 was probably realistic relative to what dealers are feeling over the trends over the last few years,” he says.

“So I think until our dealers improve their profitability and we get them to where they’re expanding again, they’re going to feel a bit pensive. And it’s our job to try to drive it to a positive resolution. There was a positive thing that came out of this. With that kind of frustration from the dealer network, we wondered what do they say to the customer in their day to day actions? And then Farm Equipment came out with their periodic survey that showed that loyalty is near the top at Case IH, so we felt a lot better. “This is just a business situation for our dealers; the brand loyalty report shows that they’re not backing off on who they need to be in the marketplace.”

The Dealer Advisory Board

Griffin summarized the Dealer Advisory Board (DAB), which met as a group in Vail, Colo., in September. The 18-member DAB, she says meets semiannually and also oversees 16 subcommittees, with 8-10 serving on each. “We try to balance that to make sure we have dealers from all the regions because their needs are different,” she says. Steve Hunt from H&R Agri-Power was the most recent chairman in a 4-year board rotation, with Scott Hoober of Hoober’s Inc., now assuming the chairman role.

Walker, who has been in similar positions of authority at other major OEMs, says Case IH is unique in its DAB. Namely, it evolved from a board involving only the top-performing dealers to one that’s more representative of the entire network in terms of geography and size. “And then we got more dealers involved with expertise on subcommittees, such as a product group, one on high horsepower tractors, and another on business topics such as pricing and programming.” 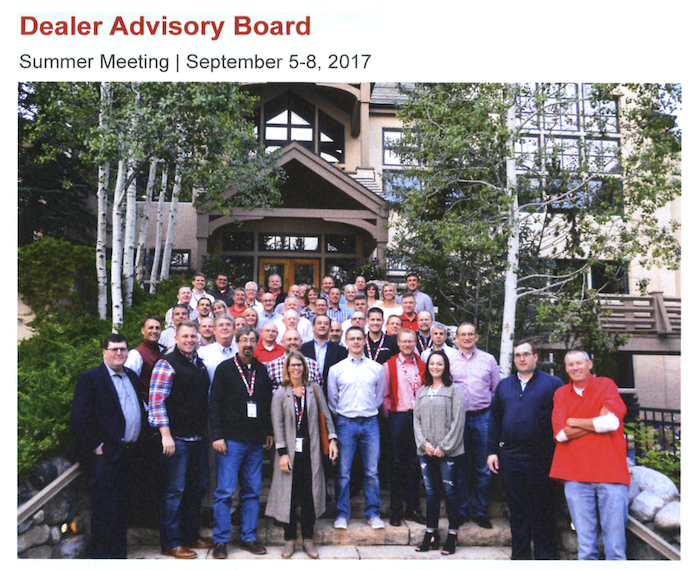 Walker says those subcommittees and the chair of each committee reports to the DAB twice a year, but supporting them are other dealers and company personnel that meet throughout that 6 month period to keep things moving.

“When you multiply that out — say across 8-10 dealers on 16 subcommittees — you’re getting a pretty good voice of disbursement of your dealer network entirely on topics. So as a way of listening, I do think our DAB is unique — it’s a working model, it’s ongoing, it’s fluid and we have rotations on and off. I think it’s probably one of the more broader, influential ones in the business.”

Griffin says “The dealers on the Dealer Advisory Board are all about getting the business done. They realize that things have to change and we have to do things. We have introduced new things and they’re pretty understanding of that. But there are things like parts availability that they want resolution on and are helping us here achieve that.”

Coming Next … Future installments in the series Clearing the Air on Competing Brands, New Resources in Best Practice Sharing and more.