Navigating the Numbers for Growth 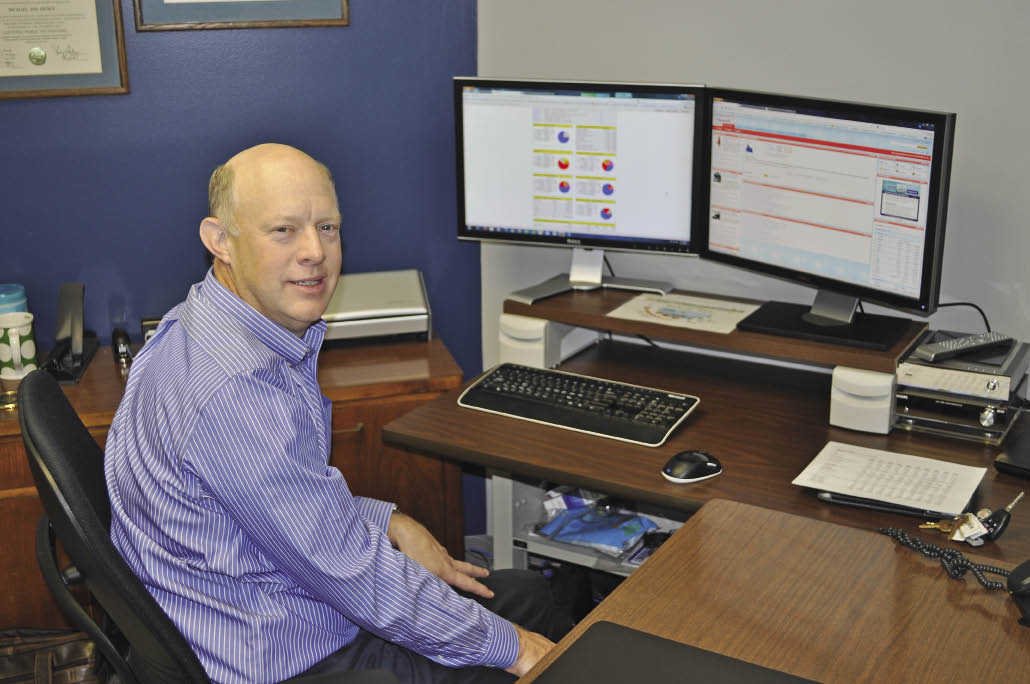 Years with Birkey’s: 19 (prior experience included public accounting and working for a large multinational hotel chain)

Role: Hedge is charged with creating the vision for how the firm finances the operation and prepares for the future. “But,” he says, “also making sure that we’ve got everything in place so accounting doesn’t hinder what we’re trying to do in serving the customer,” he says. Beyond just laying down numbers and creating financial statements, Hedge communicates how to interpret the numbers and teach them to others for good decision making. Hedge manages a 15-person department (which includes marketing and HR in addition to traditional accounting responsibilities).

Spend time with Mike Hedge at his office in Rantoul, Ill., and terms like number cruncher, prognosticator, teacher, purser, and analyst all come to mind. And when it comes to the subject of balance sheet management, “evangelist” is also a fitting word.

As CFO & Treasurer of a $240 million company, Hedge must manage all the details yet remain at a 50,000-foot view to pilot the finances of a growing company.

The leadership of Hedge, who CEO Ron Birkey has called “the finest CFO in the farm equipment dealer industry,” is a big reason for the company’s ability to quadruple its business from 2000-2010 with no outside capital, while also lowering its leverage by 35%.

“If there’s one thing that helped us grow and do what we’ve done,” says Hedge, “it’s the information that we prepare and put in people’s hands.” The perspective that Hedge provides, is what turns information into the knowledge that can be acted upon.

“We have a high level of discipline to retain the earnings in the business. We controlled our growth, meaning we didn’t do too much too fast, and made acquisitions where a ready market for revenue streams existed that could yield a return in a quick manner. And we focus on used inventory turns every day of the week.”

While many dealers dream about achieving the financial stability of Birkey’s Farm Store, the company didn’t get there without enduring some pains of its own. In the early 1990s, the company was like many other dealers that had undergone mergers and acquisitions — decentralized accounting, inconsistent procedures, various computer systems, and inaccurate and unreliable reporting. Hedge’s mission was to chart a new course, which he said took about 3 years to accomplish.

The shift from the individual entrepreneur to a management structure remains a challenge for many dealers today, he says. “Those individuals did things a certain way and succeeded. But when you become a large organization, you need an infrastructure, and individuals must be willing to subordinate their preferences for what works for the group.” Dealers who don’t immediately come to grips with this mindset change often struggle after a merger, he says.

“In my previous career, I’d seen how other businesses consolidated cash management, budgeting and financial reporting. I was an outsider to the equipment business in 1992, but that also meant I didn’t have preconceived judgments about how a location or manager wanted to do something. It was still a hard sell to get everybody thinking in the same direction, and took people out of their comfort zones.”

Hedge admits that it took a crisis to wake up the company, one so serious the dealership sought assistance from Case IH to work its way out of the problem. “We reached a crisis point that forced us to understand just how straining inventory, and used inventory in particular, was on our business.” While Hedge sounded the alarm from the day he walked in the door, it was a 2-year process, but as a result, they are true students of the business.

“By the mid-1990s, we realized that we, and we alone, had to run our business. We had to manage our balance sheet, which meant managing our inventory turnover and controlling how we sold equipment. We transformed ourselves from a company that managed only the income statement to one that became very focused on the balance sheet.”

That understanding, says Hedge, provided the context for everything the company did moving forward.

According to Hedge, every dealer must understand the impact of leverage and inventory turns. “There’s so much cash that can be tied up that it’ll really restrict your business’ ability to operate effectively.”

Leverage, Hedge says, is the amount of an organization’s assets in relation to the equity the owners have in the business. “When leverage gets too high, you’re looking for outside financing — whether banks or the captive’s finance company. The higher that leverage, the more risk outside lenders see, so you have a higher cost to capital. Unless you show an ability to manage and control leverage, lenders are reluctant to grow with you.”

Birkey’s leverage is maintained in the 4-5 range, above the 3-4 range that Hedge considers optimal. “But unless you take on outside capital, a growing business will need to borrow and have a little higher leverage than one that’s not growing.”

One of the biggest things driving leverage up in the farm equipment business is inventory. With 80% of Birkey’s assets in inventory, Hedge says it’s absolutely vital to control used inventory turns.

Birkey’s aims for a 4-times or better inventory turn, which is calculated as the cost of sales for the last 12 months divided by average inventory balance for the same period.

The cause of idle inventory, says Hedge, often stems from stubbornness to write-down a piece on the lot because a salesman or manager feels it deserves a better price. “In the meantime, you lose 3-4 other sales.” Today, “managing turns” has achieved mantra status throughout the organization.

“Turning inventory has been very difficult over the last 2 years in particular. All the manufacturers are driving for market share on new equipment, and their programming has been such that there hasn’t been enough of a difference between the price of the new and used. So customers buy new, which accomplishes the goals of the manufacturers to move a lot of equipment. But it causes the used to sit on our lots longer, putting pressure on our used gross margins and making it more difficult to turn at acceptable levels.”

That’s the balancing act, says Hedge. You want to help your manufacturer and get enough product out there to create the parts and service work. “But at the same time, you’re trying to manage the used turnover so you have good cash flow and don’t jeopardize the company.”

According to Hedge, used inventory turns were the key to delivering the firm’s impressive results over the last decade. While the company was in acquisition mode, its turns were in the 4-5 range. “That freed a lot of cash to finance these acquisitions.”

Now that a year-long project to establish a new credit facility in place, Hedge’s goal for 2011 is bringing the used turns back up to acceptable levels, which has been sliding for the past year. “The problem,” he says, “is that when it goes low, it takes time to move it back in the right direction. It doesn’t happen overnight.”

1. Properly capitalize the business for the amount of volume you’re doing.

3. Create a system of financial reporting that is consistent, timely and relevant to individual staff responsibilities.

4. Proactively communicate financial information to those people who are providing you with financing.

6. Build a team that is all pulling in the same direction. Knock down the walls so that decisions are made in the best interest of the company, not individual stores or departments.

7. Be approachable and available to provide perspective to those whose expertise isn’t in accounting or finance.

8. Educate employees about the financial impact of their daily job functions or roles.

The biggest change was a byproduct of the electronic age. “You now have information coming at you 24/7 — all the e-mails and reports with people looking for immediate responses. You’re constantly responding to a barrage of information. You must be able to juggle an amount of information that can overwhelm you at times.”

The second factor, he says, is the financial situation today, and the amount of effort it takes to get financing in place today. “Banks have become more conservative, and some of the captives don’t have access to capital like they did. Borrowed capital is the lifeblood of the business. Things have improved, but it was very difficult to find attractively-priced capital for a couple of years, even though we were coming off of our best years in history.”

Hedge likely helps his cause through a philosophy of full transparency with his lenders. “All our banks get monthly financial reports of the same level of detail of our store managers get. We try to be proactive in sharing information, dialoguing with them before something unexpected happens or when a shift occurs in the business. We want to tell them what’s going on and how we plan to address a situation; not have them call and ask why.”

Weather: Navigating the Ups and Downs of Variable Weather

[Webinar] Managing By the Numbers