It’s been 10 years since Farm Equipment last sat down with the top executives of the major ag equipment makers, and 13 since the very first time we published a report like this. While some things remain the same (consolidation, market share demands, purity pressure), others have changed — notably the economy and the names of the executives at the top.

Missing once again from the report is John Deere. The other major manufacturers, without hesitation, all accepted the opportunity to openly connect with Farm Equipment’s dealer audience about the state of agriculture and the farm equipment business, but John Deere declined to make an executive-level representative available for the report.

While dealer consolidation is once again a common theme in this year’s report, the tone from the majors is that the market will dictate where and when that consolidation happens. While it’s still a big issue in the industry, dealers only ranked it No. 16 in Ag Equipment Intelligence’s 2018 Dealer Business Outlook & Trends survey (12.7% most concerning, 38.0% concerning, 49.3% not concerning). 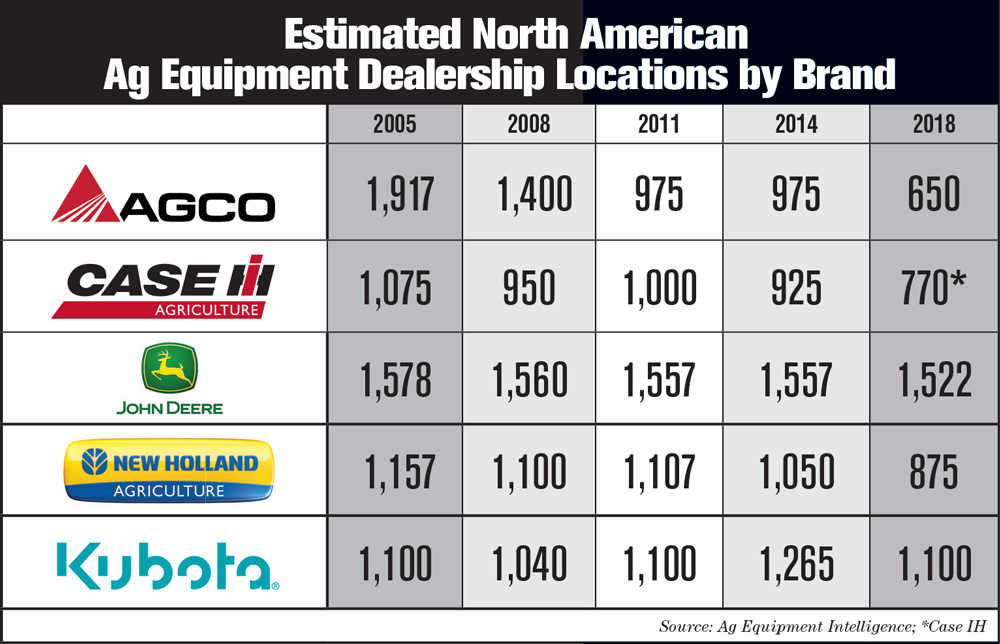 As equipment has become more technical, dealership training has become increasingly important. Training and retaining employees — particularly for service techs — is an issue for dealers and the manufacturers. In fact, finding and retaining new personnel topped dealer concerns in 2018 and technician availability was ranked fourth.

To see how dealer-manufacturer issues have evolved over the years, visit Farm-Equipment.com/majors-special-reports to read the special reports from 2006 and 2009.

2006: How the ‘Big Four’ are Dealing with Dealer Issues

The economy, of course, has been an issue plaguing manufacturers and dealers alike. Net farm income continues to be down in the U.S., and the stress trade disputes have put on manufacturers (and thus dealers) is up. Since President Donald Trump announced tariffs on steel and aluminum in March 2018, the issue of increasing price of equipment has been front of mind. The majors have all alluded to price increases coming as a result. Retaliatory tariffs on U.S. commodities also have dealers concerned about their business. In fact, 87.8% say trade tensions will have a negative impact on their dealer operations in 2019, according to Ag Equipment Intelligence’s Dealer Business Outlook & Trends Report.

While none of the majors flat out said they want their dealers to be “pure,” there’s been continued new product introductions (or acquisitions) from all brands to fill in the product gaps that suggests it’s still a top priority among the manufacturers. 2019 will likely see continued economic and trade challenges for the ag industry. As of early December, only John Deere has released a forecast for 2019, calling for ag & turf sales to be up about 3% in 2019.

Changes at the Top

Since Farm Equipment ran its first report with the top executives at the major farm equipment manufacturers in 2006, there’s been a number of changes in leadership.

For Kubota Strengthening and Supporting Dealers is Priority