Despite ongoing concerns with low commodity prices, North American farm equipment dealers are far more optimistic about their business prospects than they were a year ago.

Based on the responses to Ag Equipment Intelligence’s most recent Dealer Sentiments & Business Condition Update survey, a net 40% expect improved sales in 2018 and are forecasting a 2% increase in sales for the year. Last year at this time, dealers were expecting a 4% drop off in sales for 2017.

Comparing year-over-year changes in the dealers’ outlook for the coming year since 2012 shows dealers are clearly more upbeat for 2018 than they have been in the past 5 years. In December 2012, 76% of dealers were forecasting increased sales growth for the following year. Since then and up until this year, dealers’ projections were clearly negative about potential sales growth during the year ahead. Sentiments bottomed out in December 2015 when more than two-thirds (65%) of dealers were forecasting a drop in sales and only 17% expecting an increase, for a net of –48%. 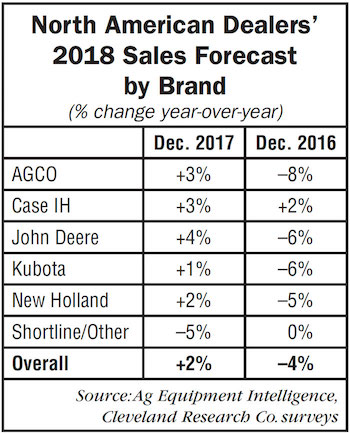 Dealer sentiments about their prospects began changing in recent months, with a net 28% of dealers in the September study expecting growth and a net 32% in October. The current outlook for 2018 shows 55% of farm equipment dealers are looking for increased sales, while only 14% see another drop in sales. John Deere dealers are currently the most optimistic, projecting a 4% increase of sales in the year ahead, while AGCO and Case IH dealers expect sales to improve by 3%.