The revenue stream from the sale of precision farming equipment is expected to be as good as, or better than, what dealers saw in 2015. According to Precision Farming Dealer’s 2016 Benchmark Study, dealers share a cautiously optimistic outlook for total precision farming revenue in 2016, with 88.9% of the total respondents predicting similar or improved results from the 2015 totals (10% up 8% or more, 40% up 2-7%, 38.9% little or no change from 2015 levels).

Just 21.1% of dealers expect any kind of decrease in revenue, a considerable improvement from last year’s results when 35.5% of dealers predicted losses. When it comes to projecting strong growth, however, dealers are less confident this year, with just one in 10 dealers expecting revenue increases of over 8% for this year vs. 18% a year ago. This marks a continuing downward trend in strong growth expectation among dealers, with a total decrease of over 20% since the 2014 survey.

As expected, sales of hardware is expected to be the top revenue source for dealerships in 2016, marking the fourth consecutive year it has found the top spot. More notably, the percentage of dealers expecting a bump in hardware sales increased from 49.9% in 2015 to 53.4% in 2016, ending a 3-year downward trend.

While the number of dealers project­ing software and signal subscriptions remained relatively consistent year-over-year at 8.8% and 9.5% respec­tively, service support and data man­agement both suffered significant drops in revenue expectations for the first time in 2016. Prior to this year, a growing number of dealers had projected both segments to rise consistently in each year since 2013. After accounting for just 1.5% of total projected revenue in 2015, “other” unspecified revenue sources are fore­cast to jump to 6.7%, indicating deal­erships will be looking for new strate­gies to stay ahead. 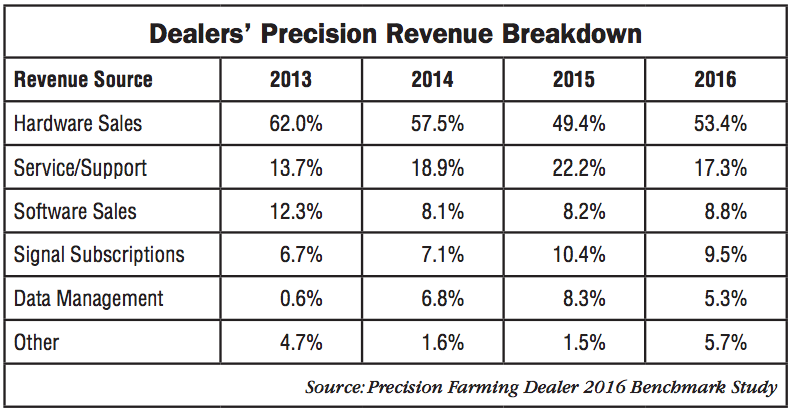 The Precision Farming Dealer's 2016 Benchmark study's full report can be found in its summer issue.