Blog-writing duty helped take steam out of the tank over the Labor Day weekend on national matters that were causing “mental labor.” That is, the mounting lawsuits and legislative or executive orders being leveraged to solve matters and cheat what could be a normal course of creative problem-solving. At least on those matters that are true problems ...

If your cup isn’t already overfilled on right to repair (R2R) after this week’s events in Washington D.C., you can read the September 4 blog on legislating solutions here.

Interestingly, our company is increasingly found throughout the ongoing media onslaught, again in this week's testimonies. Because our company publishes Ag Equipment Intelligence's annual Big Dealer Report (jointly with the Machinery Advisors Consortium) and also curates Dealers on the MoveTM (acquisitions news) and the Farm Equipment Dealer 100TM List, Farm Equipment and Ag Equipment Intelligence continue to show up myriad places on the R2R front, often cited in attorney-for-hire advocacy pieces penned by some who may not understand the very data they’re looking at.

If each of the Big Dealer Report citations in legal documents and advocacy pieces represented an actual sale ($299), we might actually be able to afford to pay for “some” of the new programs that our administration is swiftly writing checks for.

Back to Right to Repair. R2R crusaders like U.S. PIRG and Vice have reported on several occasions that John Deere dealers refused to acknowledge requests from the public for the Customer Service Advisor program. I recall an article that cited a dozen or so dealers across multiple states were called with anonymous requests to purchase the $2,400 software. The response was crickets, it was reported, or worse, included lies  about who was permitted to access the software.

While I suspect some information was conveniently left out of these position pieces, it didn't sound like the dealer audience I've come to know. And while I didn't have the endless labor hours to throw at an investigation like the think-tanks and lobbyists (perhaps that's why journalism is facing a labor shortage these days), I was willing to make an inquiry of my own — in an experiment of 1.

I went to the John Deere site and completed the online request form for Customer Service Advisor. I identified myself only as “MJ” (and not part of the farm equipment media) and asked for information about the software. A few days later, I got the friendly email below from Erich Bartos, service manager at the nearest John Deere dealer, Proven Power in Waukesha, Wis. 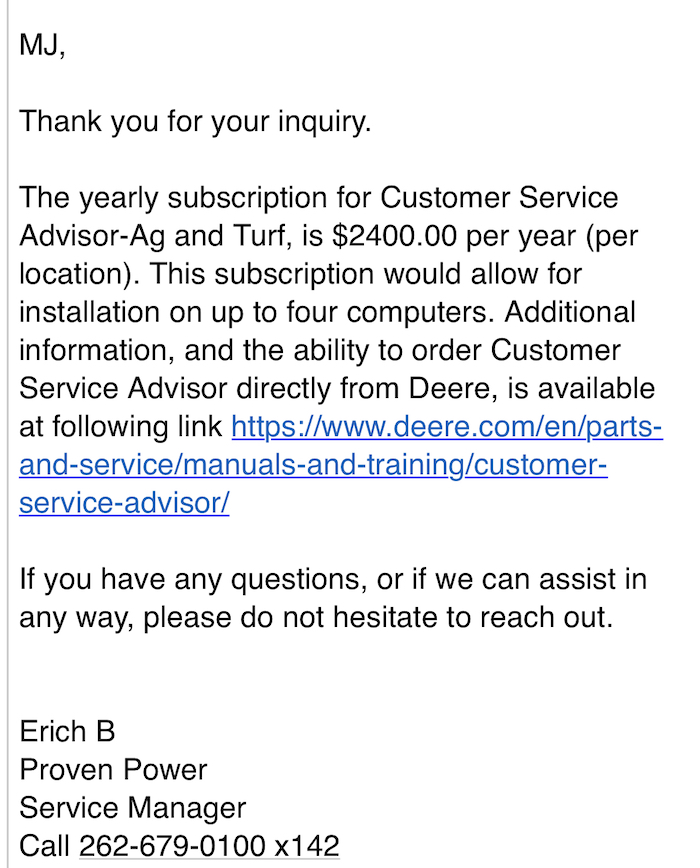 I placed a call to the store and learned Erich was out, but another service department colleague followed up to see if he could help, so it didn’t appear that there'd be stonewalling going on here with an inquirer about Deere's diagnostic software. After "normal" phone tag, Erich and I connected.

Bartos was friendly and congenial with someone who’d never spent a nickel at his store, and patiently answered my questions. I learned that if I bought the system, the benefits would include access to up to 4 computers at our location, would provide me thousands of pages of operator manuals in one place, and allow me to check codes. I wouldn’t be able to clear the codes, of course, but I’d be able to pull them up and determine what they mean. I’d be able to learn some quick tips to help a maintenance or troubleshooting situation, such as locating test points and which specific sensors or solenoids should be checked. I did eventually let on that I was part of the Farm Equipment magazine (a business-to-business magazine for machinery dealers).

Interestingly, he said that my inquiry was the first inquiry that his store location received. From other reports, one might think dealer phones would be ringing off the hook.

Bartos expects some farm customers to buy the software for the diagnostics and troubleshooting benefits. And he also expects demand from the municipalities and airports Proven Power also serves. And, for the record, and contrary to some public perception, Bartos isn’t kicking and screaming about making the software available to his customers. He realizes it can be helpful on both ends. That’s not a dealership that views its customer base as nothing more than a purveyors of a stack of bills, something commonly portrayed by anti-commerce writers.

“I think this could actually make things easier,” he says of the software licensing. “The owners can diagnose some of their own problems and if they have further questions, can call the dealer.”

So, I’ll ask again, do we want legislation? Or cooperation?

The Ag Equipment Repair Debate: Is It About R2R or R2M?

Right to Repair: Legislate in a Solution? No Thanks

Right to Repair and What it Means for Entrepreneurs