In summarizing its findings, the report said, “Large operating loans made by large agricultural banks led to a significant increase in farm lending in the third quarter of 2018. A sharp increase in the volume of loans exceeding $1 million was a primary contributor to the increase in non-real estate farm lending. In particular, a majority of the increase was supported by loans used to fund current operating expenses. The increase in the size of loans also sharply increased the share of agricultural lending at large banks while interest rates on farm loans continued to trend upward.”

The data is based on the National Survey of Terms of Lending to Farmers. Total volume of non-real estate farm loans was more than 30% higher than a year ago and, unfortunately, a very small portion of the total lending was for ag machinery. The report authors say, “The sharp growth in farm lending followed steady increases earlier in 2018 and represents the largest annual percentage increase in the third quarter since 2002. The typical seasonal pattern of reduced loan volumes from the second quarter to the third quarter also was much less pronounced. The volume of non-real estate loans decreased less than 3% from the previous quarter, compared with an average decline over the last 10 years of 14%.” 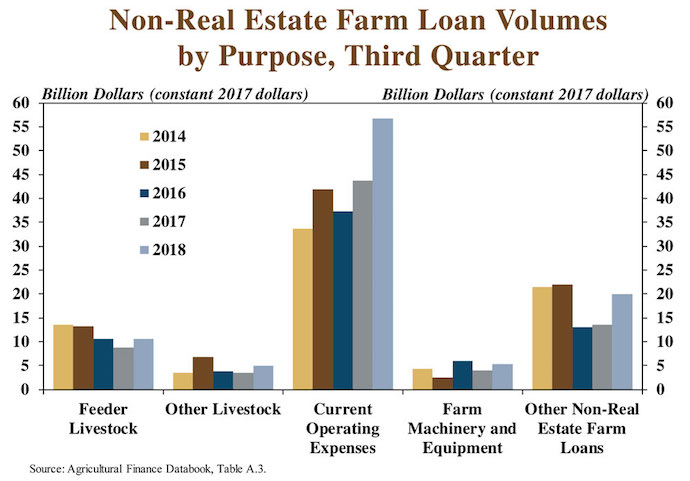 While no one is yet is sounding the alarm, these trends in farm lending bear watching.

What’s also interesting is the demand for non-real estate loans increased in four of the five Federal Reserve Districts that comprise most of the U.S. Breadbasket (Chicago, Kansas City, Minneapolis and St. Louis). Meanwhile, the Dallas Federal Reserve Bank is reporting that demand for non-real estate farm loans in its coverage area continues to decline.

The lead author of the Ag Finance Databook report, Nathan Kauffman, vice president and Omaha Branch Executive of the Kansas Federal Reserve Bank, will be the featured speaker at Ag Equipment Intelligence’s Nov. 9 webinar on trends in agriculture lending and credit conditions.