The Federal Reserve Banks of Kansas City and Dallas are reporting that demand for farm loans held steady or declined slightly in the second quarter, but renewals and extensions increased somewhat. At the same time, the banks report the interest rate on some loans, including ag machinery, has risen modestly.

Kansas City Fed. Based on the results of its survey of ag lenders in the region, authors of the quarterly Ag Finance Databook, Nathan Kauffman and Matt Clark, reported on July 14 that, “Agricultural lending at commercial banks was steady in the second quarter, but risks in the farm sector continued to weigh on loan growth and credit conditions. The volume of non-real estate farm loans increased only slightly from a year ago as interest rates continued to trend up at a modest pace and maturities continued to lengthen. The rate of farm loan delinquencies edged higher, but the performance of agricultural banks generally remained strong, even as farmland values in most areas continued to decline.”

Through the first half of 2017, the total volume of new farm loans remained “subdued,” and were 7% less than the first half of 2016. The authors explained, “Amid a recent decline in working capital and a slight increase in risk associated with agricultural lending, some bankers and borrowers have taken more time to reaffirm financials, expenditures and loan terms from one year to the next. Persistent declines in farm income have likely slowed the volume of new non-real estate loans as bankers and borrowers have sought to manage risk.” 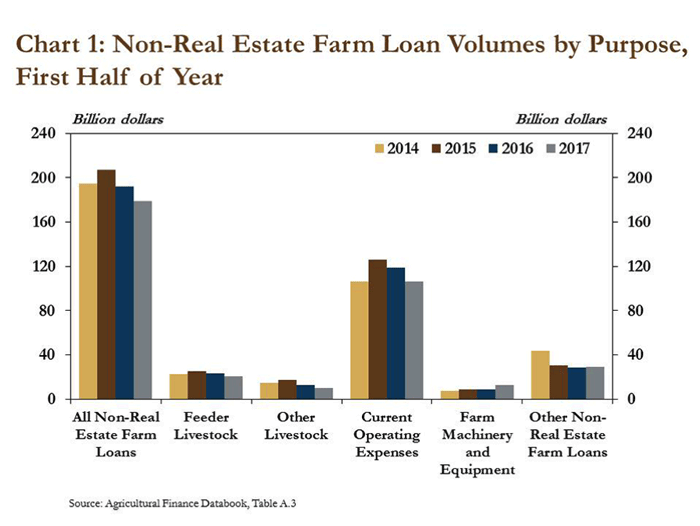 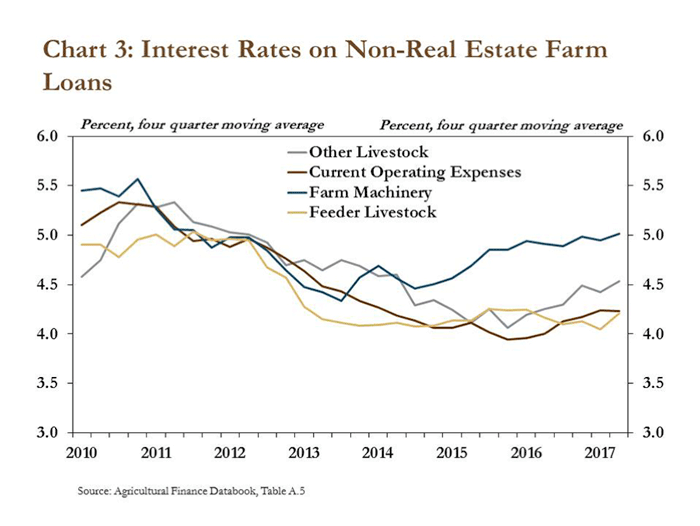 While lending activity slowed, Federal Reserve surveys showed that “borrowers’ demand for financing generally remained strong,” and growers’ need for loan renewals and extensions remained elevated in each Federal Reserve district, marking the ninth consecutive quarter that each district has reported an increase. Each district also reported a decline in the rate of loan repayments for a ninth consecutive quarter.” 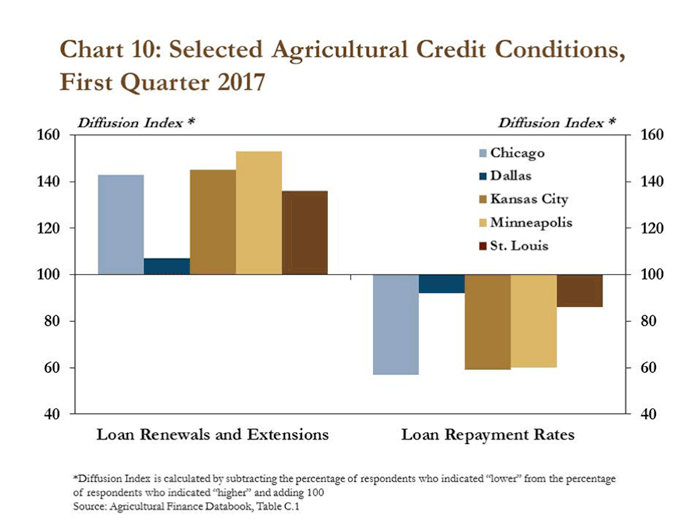 Dallas Fed. In its quarterly survey of agricultural credit conditions in the 11th District, the Dallas Fed reported overall ag loans decreased for the seventh consecutive quarter. “Loan renewals and extensions continued to increase, albeit at a slower pace.”

Dallas Fed economists said the rate of loan repayment stabilized after declining for 2 years. Overall, the volume of non-real-estate farm loans was lower than a year ago, as was the volume of farm real estate loans. The volume of operating loans increased; all other loan categories’ volumes fell year-over-year in the second quarter.

What is the Biggest Source of Ag Equipment Loans?