Reporting on the results of its second quarter Ag Credit Survey, economists from the Federal Reserve Bank of Kansas City suggest that, while still soft, the farm economy in the Fed’s Tenth District is showing signs of stabilization. Nonetheless, regional banks are closely scrutinizing farm loans.

According to authors of the report, Nathan Kauffman and Matt Clark, “Agricultural credit conditions weakened further in the second quarter, but the pace of deterioration has slowed. Although the rate at which farm loans are being repaid continued to decrease, the change from a year ago was not as sharp as in recent years. Only 37% of bankers in the Tenth District reported a decrease in repayment rates from a year ago, the lowest share since mid-2015. An even smaller share expected repayment rates to decline again in the third quarter. Similar to the past 3 years, demand for farm loans at agricultural banks in the District continued to rise, but at a slightly slower pace than in recent quarters.”

They point out that as repayment rates continued to weaken, benchmark interest rates on farm loans have risen. “Interest rates on variable rate operating loans increased to 5.8% in the second quarter, the highest in 5 years. Interest rates on other farm loans, including loans for machinery and real estate, increased at a similar pace. The recent increases in rates may be in response to heightened risk in the farm sector, but also may be attributed partially to movements in short term interest rates,” say the report authors. “The federal funds rate, for example, has increased in 2017 to an effective rate of more than 1%.” 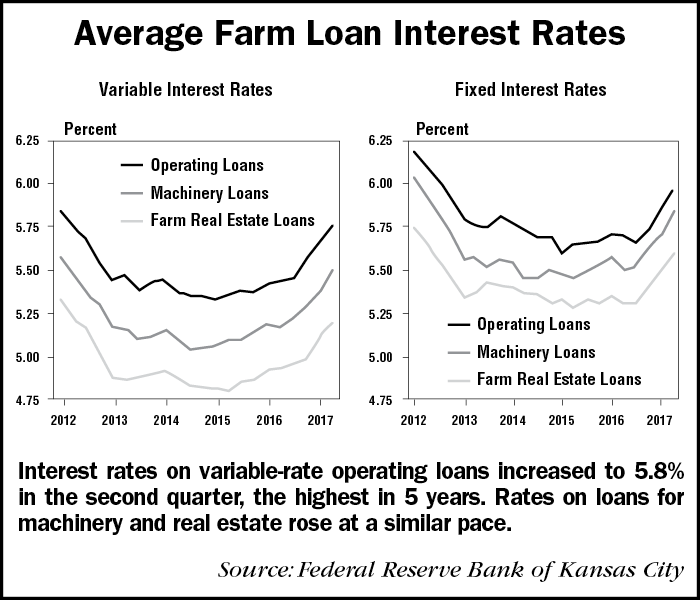 In addition to making slight increases in interest rates, bankers have taken other steps to manage risk in their agricultural loan portfolios, according to the report. “Compared with bank practices of several years ago, the primary changes have been an increased use of debt restructuring and increased loan analysis.” 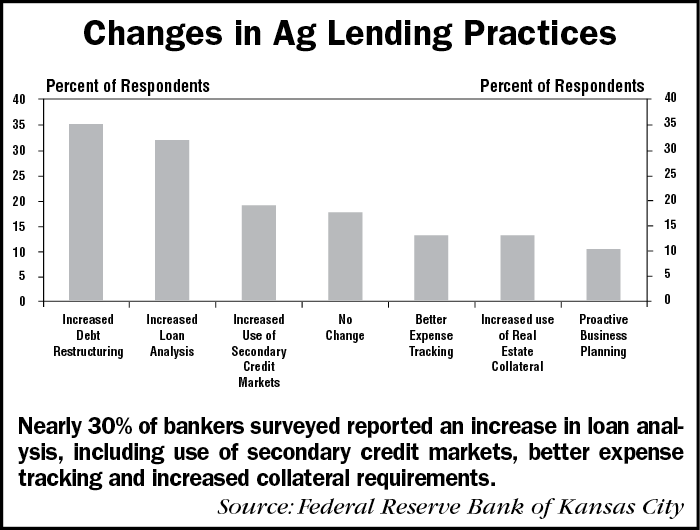 The report goes on to say that bankers also were slightly more cautious than a year ago in approving new loan applications. In the second quarter, about 17% of bankers reported that they denied at least 10% of all new farm loan requests, up from the previous 2 years. 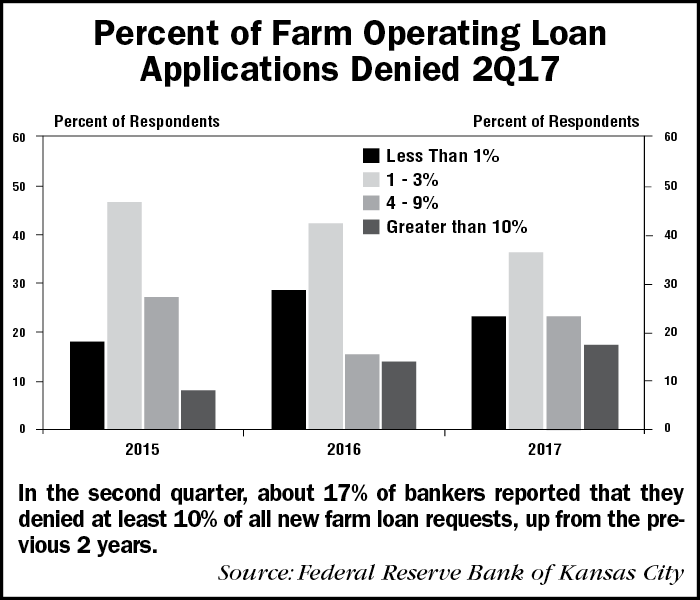 Kauffman and Clark conclude that the outlook for the farm economy in the Tenth District remained subdued in the second quarter. At the same time, the economists add, changes in coming months may not be as severe as in recent years. “Following a sharp drop in crop prices in 2013, income in the farm sector also dropped rapidly, agricultural credit conditions deteriorated, and farmland values cooled. However, agricultural commodity prices have steadied recently, and have rebounded in the cattle sector. As prices have stabilized, albeit at a relatively low level, the pace of declines in the farm sector also may be less pronounced than in recent years.”

Midwest Farm Lending Up, But Not Much for Equipment

[Podcast] Ag Economy Begins to Recover, But an Overall Recession is on the Horizon