Results of Kansas City Federal Bank’s most recent survey of farm lenders shows that interest rates on farm loans have continued to inch higher. At the same time, the first quarter 2018 Agricultural Finance Monitor published by the St. Louis Fed indicates that farm income slipped for the 17th consecutive quarter.

The interest rate increases had a “rather modest effect on producers’ overall expenses,” accord­ing to the Kansas City Fed. Authors of the May 4 report, Nathan Kauffman and Ty Kreitman, added, “Despite the modest increase in interest expenses, higher interest rates typically are expected to place downward pressure on farmland values, which may still have a more significant effect on farm finances than interest expenses directly.

Farmland values, however, have continued to remain relatively steady and, even in a higher interest rate environment, have provided ongoing stability to farm sector balance sheets and agricul­tural lending.”

Since the fourth quarter 2015, interest rates on operating loans at commercial banks have increased from 3.5% to 4.9% in the first quarter of 2018. Interest rates on other types of loans, including those for farm machinery, have also risen steadily in recent years, but at a somewhat slower pace. “The increase in rates on operating loans, however, is perhaps even more notable because these loans account for about 60% of the volume of new non-real estate farm loans at commercial banks,” say the report authors. 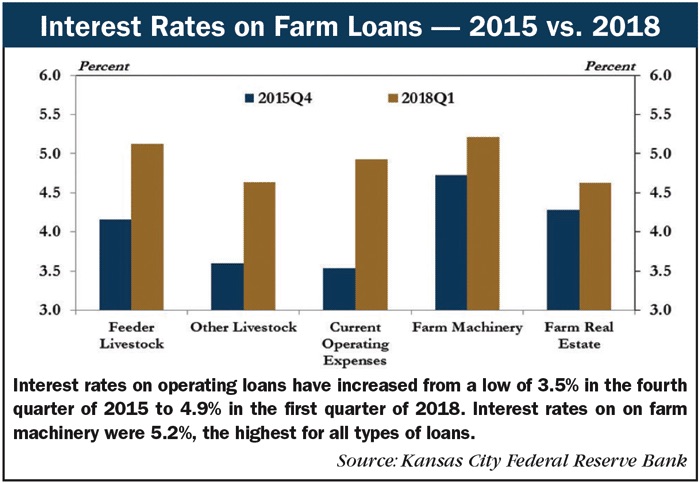 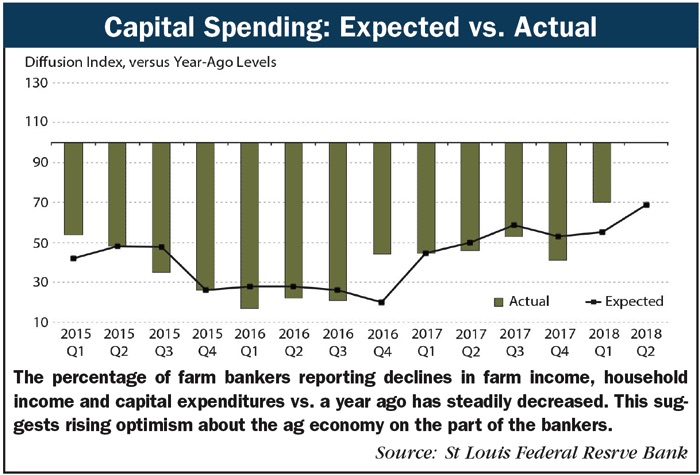 The impact of higher interest rates on new, short term loans has been modest on farmers’ debt obligations. According to the KC Fed, in 2015, the annual interest expense for a hypothetical Midwest farm operation specializing in corn production was about $12 per acre for its operating loans. Despite the increase in interest rates since 2015, the annual interest expense for this typical farm has increased by less than $3 per acre as of the first quarter of 2018. 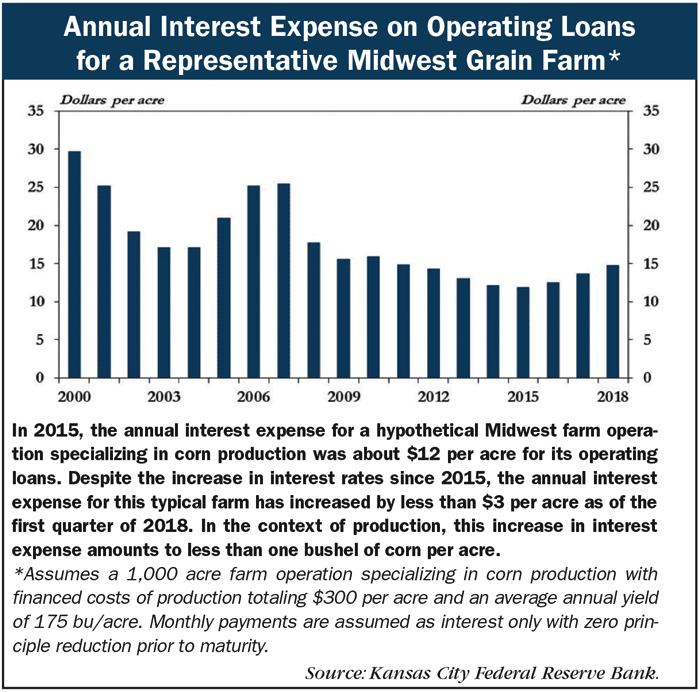 In its May 10 report, the St. Louis Fed reported that ag bankers in the 8th district indi­cate that that farm income declined compared to a year earlier for the 17th consecutive quarter during the first 3 months of 2018.

Compared with the previous survey, slightly more bank­ers were more optimistic about the prospects for farm income, household income and capital expenditures over the next 3 months.

In addition, survey results showed quality farmland val­ues fell somewhat during the first period of the year vs. a year ago along with cash rents on quality farmland. On the other hand, ranchland or pastureland values rose sharply in the first quarter, as did cash rents on this type of land. “Judging from the expectations for several farm-related metrics reported last quarter, respondents generally believe that economic conditions in the farm economy in the first quarter of 2018 were modestly better than anticipated 3 months earlier,” the report said.