It’s not getting any easier for farmers to borrow funds for ongoing operations, let alone ag equipment. Farm lenders are taking a much closer look at crop producers’ loan status as concerns about repayment are starting to grow. “The continued ‘margin squeeze’ faced by crop producers across the Midwest has led to a drastic reduction in working capital buffers,” Todd Kuethe of the Dept. of Agricultural and Consumer Economics at the University of Illinois told those attending the Illinois Farm Economics Summit.

He noted that presently ag credit market data is giving off only “modest signals of increasing credit risk.” But with the interest rates expected to rise in the near term, loan repayment risks also rise for lenders. 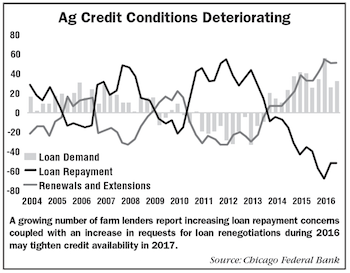 Surveys of ag bankers in the Chicago and St. Louis districts by Federal Reserve indicate worsening credit conditions in the farm sector. “A growing share of lenders report increasing loan repayment concerns coupled with an increase in requests for loan renegotiations,” he said.

These factors along with rising demand for operating loans and a modest increase in the cost of borrowing are putting lenders in a position to reject loan applications.

According to the 2016 Farm Financial Health Survey conducted by the University of Nebraska-Lincoln's Department of Agricultural Economics, more than 77% of Nebraska producers are concerned that they may not be able to obtain operating capital in 2017.

"Demand is on the rise for operating loans, which is leading to some difficult conversations between producers and their bankers," said Jessica Groskopf, assistant extension educator with Nebraska Extension.

Dealers are also noticing the increasing concerns of ag lenders. Comments to Ag Equipment Intelligence’s monthly Dealer Sentiments & Business Conditions survey have included: “Banks are scared to death” … “With such low corn, soybeans and now cattle prices, we knew sales would be down. Bankers are routinely saying ‘no’ [to equipment purchases].”