On May 9, Rocky Mountain Dealerships, Case IH’s largest dealer group in Canada, reported first quarter sales of $209.9 million, up 10.8% vs. last year. Gross profit declined by 5.3% to $26.8 million (12.8% of sales, down from 14.9% in 1Q16) as the impact on margins of trailing inventory initiatives continued within equipment sales activity.

According to RME, this effect was compounded by a change in sales mix, lower margins on bulk new equipment sales carried forward from the fourth quarter of 2016, and a $1.1 million reduction in manufacturer incentives recognized in the quarter.

In a note, Ben Cherniavsky, Raymond James analyst, says, “The first quarter of 2017 is the sixth quarter of year-over-year inventories reductions. Management has indicated that the 2016 focus on inventory reduction, which negatively impacted margins, will now shift toward margin improvement.” 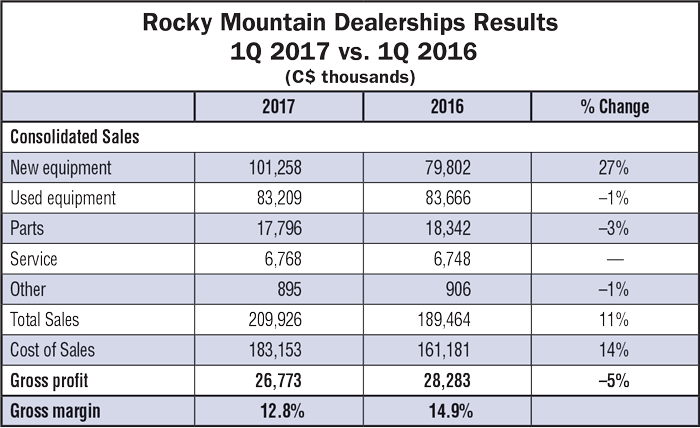 On May 11, Cervus Equipment, John Deere’s largest dealer group in Canada, reported first quarter revenues of $231.1 million, up 11% over the first quarter of 2016. Total equipment sales accounted for $158.7 million in revenue, up 13.6% year-over-year.

Total revenues from sales of farm equipment during the period were $146 million, up 11% vs. the same period in 2016. Gross profits for the ag segment were $22 million, up 5% from a year earlier. Gross profit margins were 15.1%.

He adds that the dealership group will continue to focus on sales generation and combat the pressure on margins for the remainder of 2017.

In his analysis, Cherniavsky says, “Cervus’ gross margins of 17.5% were below our 17.9% estimate and down 130 bps year-over-year. Competitive pricing pressures and aggressive discounting remain recurring themes not just for Cervus but for the whole equipment industry as dealers are finally ‘dealing’ with the inventory glut that has prevailed for almost 5 years.

“While the later innings of this cycle appear within sight, we remain uncertain about the speed or magnitude of any recovery.” 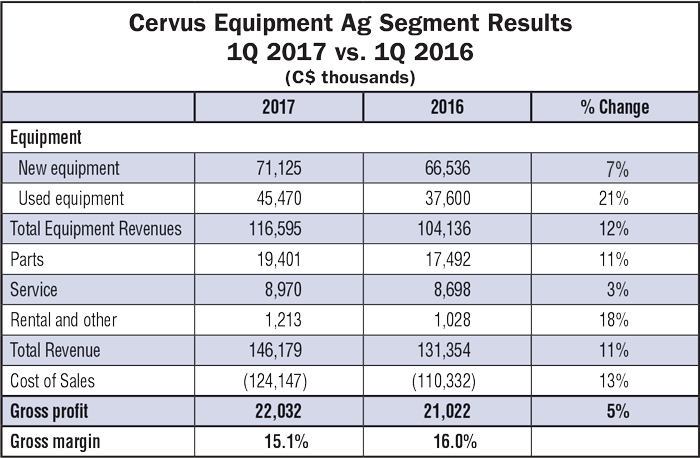