Canada’s two largest farm equipment dealers, Rocky Mountain Dealerships and Cervus Equipment reported their third quarter earnings this month and both posted strong sales for the 3 month period and for the first 9 months of 2017.

Rocky Mountain Dealerships, Case IH’s largest dealership group in Canada, reported strong sales in the third quarter, continuing a trend that started earlier this year. The company sees this a further sign that the market for farm machinery in the country’s western provinces is in a solid recovery phase.

“The forward economic indicators for our sector are strong,” said Garrett Ganden, Rocky’s president & CEO. “There is mounting evidence that the Western Canadian market for agricultural equipment is returning to normal levels after being depressed for a number of years.” 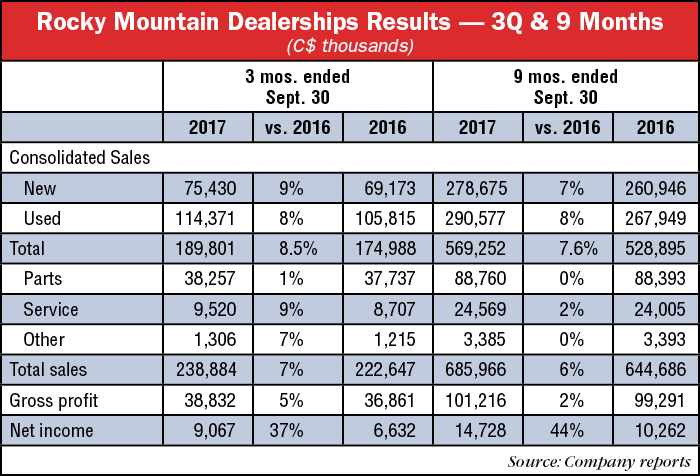 “These results, the best that Rocky has posted since 2012, were achieved with all divisions contributing to a 7% year-over-year increase in sales which, coupled with our streamlined cost structure, allowed us to deliver a great quarter,” said Ganden. “Our focus on sales and inventory management allows us to reduce debt, contain costs, increase inventory turnover and increase our return on assets.”

In its third quarter filing on Nov. 8, the company added, “We continued to apply cash generated by our operations to reduce interest-bearing debt, resulting in a $0.6 million or 16.1% year-over-year decrease in finance costs this quarter.

“Operating SG&A continues to reflect the savings associated with management’s restructuring efforts, declining 40 bps and 70 bps year-over-year as a percent of sales for the third quarter and 9 months of 2017, respectively,” Ben Cherniavsky, analyst with Raymond James, said in a note. “This, combined with the aforementioned sales growth, has generated 16% and 17% more EBITDA for the same periods.”

“The combined improvements in Rocky’s costs and balance sheet position it to scale growth more effectively and capitalize on opportunities going forward, including potential dealer acquisitions.

“Beyond a bigger footprint and more revenue, M&A historically did very little for Rocky’s shareholders. We, however, believe that management’s integration efforts over the past few years, combined with its heightened discipline on valuation, should produce different results in the future.”

New Up, Used Down 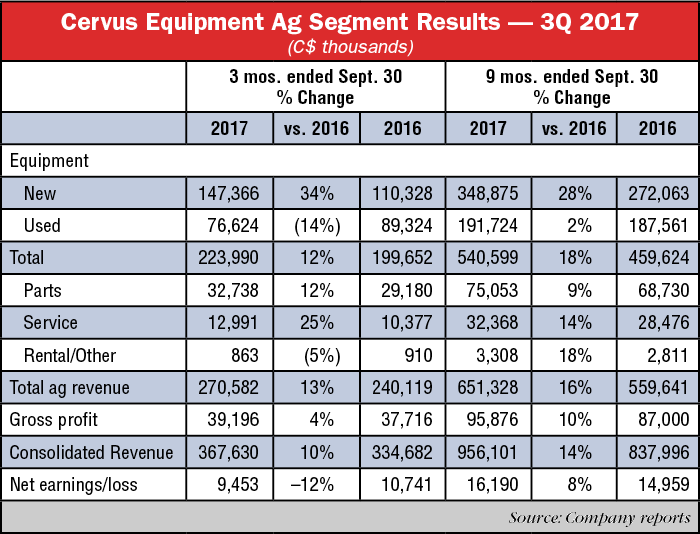 However, expectations of an early harvest reduced used equipment sales in the quarter, as producers’ need for additional machine hours in a narrow harvest window was less critical than in the third quarter of 2016. The earlier 2017 harvest also increased parts and service sales by $6.2 million in the quarter. Our optimization initiatives resulted in a 4% increase in our service department gross profit margin percentage. The sales mix impact of the substantial increase in new equipment sales diluted overall gross profit margin percentage by 1.2%, although gross profit increased $1.5 million.

In his analysis of Cervus’ third quarter performance, Cherniavsky said, “Ag revenues were ahead of our estimate on strong tractor sales, while gross margins were below forecast and down 130 bps year-over-year. Healthy Canadian farm incomes are expected to keep demand robust into 2018. Also, producers are accelerating their machine buying to make-up for deferred capital purchases over the past few years.”