Nearly two-thirds of farm equipment dealers surveyed in earlier this year expect higher interest rates on retail equipment will cause their farm cus­tomers to think twice before deciding to buy new equipment in 2018.

Ag Equipment Intelligence editors’ discussions with ag lenders, as well as reports from various districts of the Federal Reserve Bank points to prob­ably 3 increases during 2018 of about 0.25% each, or less than a 1% overall in rate increases for the year.

The survey also asked, What percentage of retail loans for farm equipment that you sell are financed by your manufacturer, Farm Credit System and local and regional banks or other lending institutions?

The next major lender for ag equip­ment retail loans were with associa­tions connected to the Farm Credit system, which comprised 27% of cus­tomer borrowing. Dealers who do not carry any of the 5 major brands relied most on the Farm Credit system com­pared with the branded dealerships. Local and regional banks or other lend­ers accounted for about 13% of farm machinery loans, with “other” dealers utilizing their services most often. 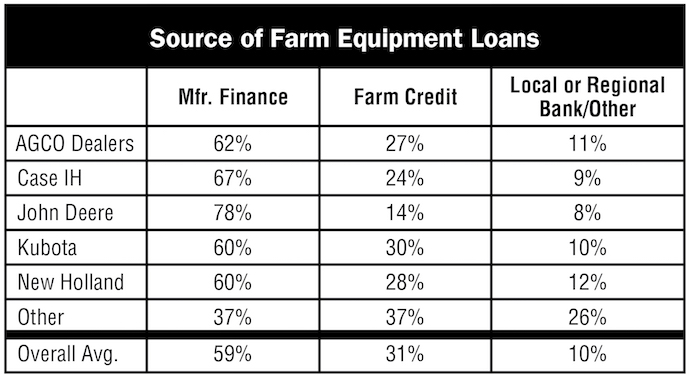