Under 40 Horsepower Tractors — Still strong numbers in this category with 17,707 units retailed in May. Actual vs. forecast percentage is moving closer with each month and should be close by year-end. 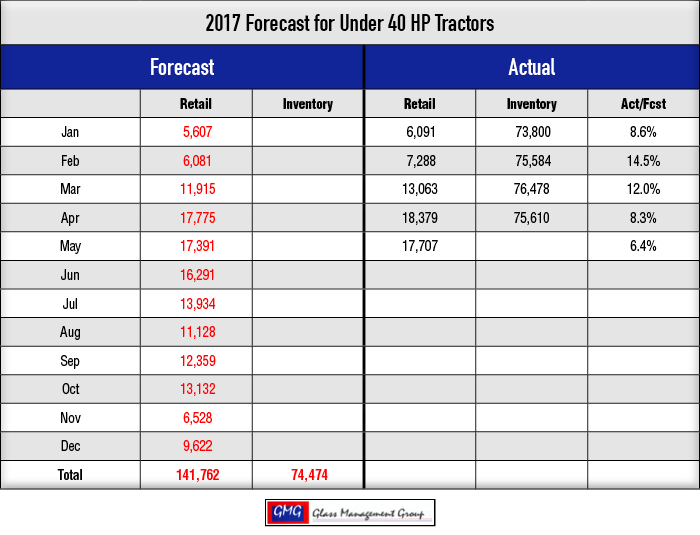 40 – 99 Horsepower Tractors — With 5,274 units retailed in May, this category is doing well but the actual vs. forecast moved backward slightly even though we are expecting this gap to close somewhat by year-end. 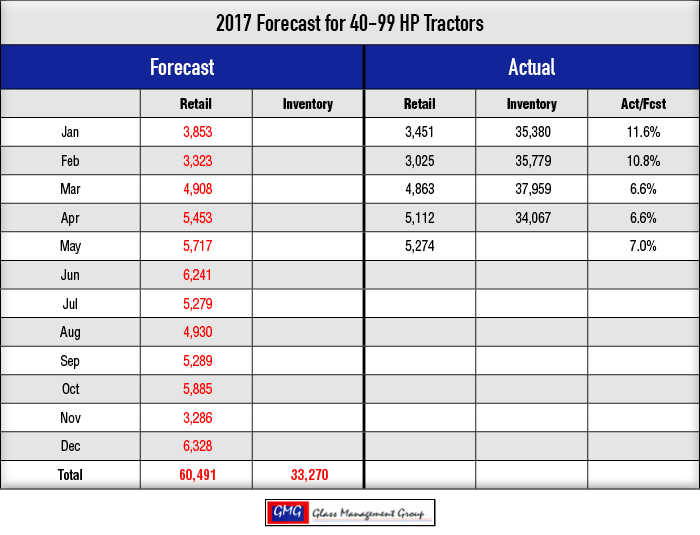 100 + Horsepower Tractors — Weak retail activity in this category resulted in 1,277 units sold and the actual vs. forecast percentage slipped this month. 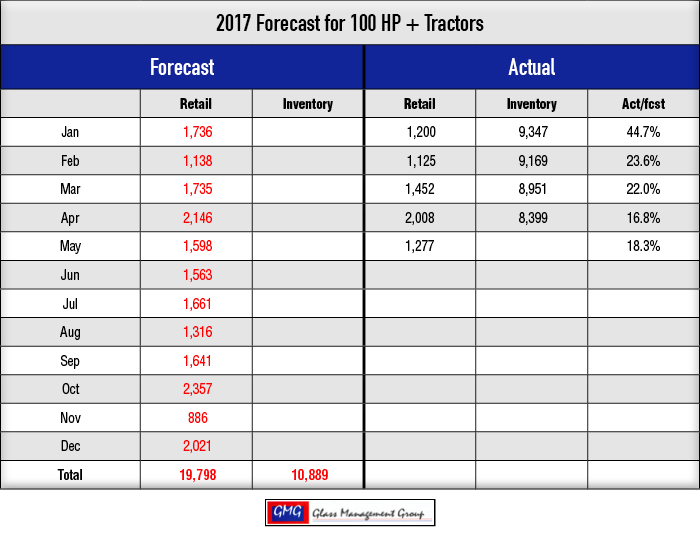 4 WD Tractors — Retail activity in this category was somewhat brisk this month and surpassed our monthly forecast by nearly 30 units. The actual vs. forecast percentage closed by nearly 6 points this month giving strength to a good year-end number. 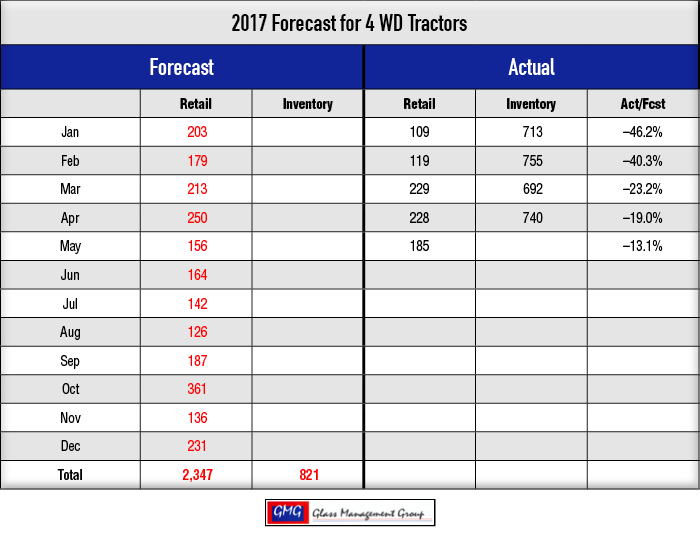 Combines — Combine sales of 213 units for May were well below our monthly forecast resulting in the actual vs. forecast percentage to tick up nearly three quarters of a point year-to-date. 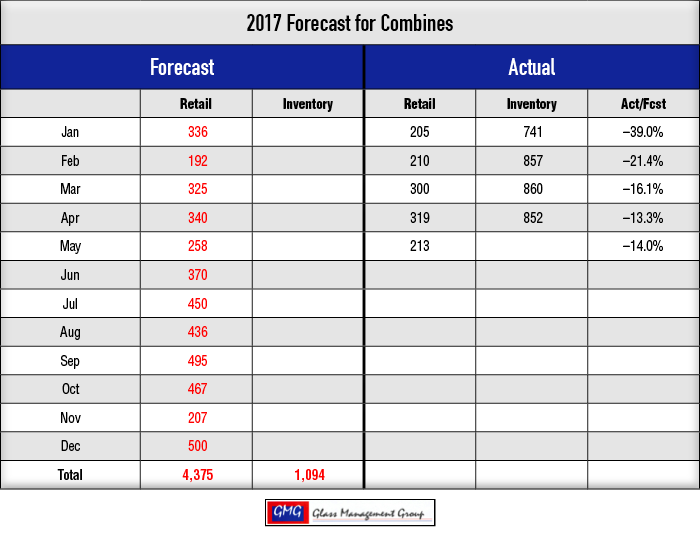 There is no doubt that the current farm economy is in a weakened condition but there are signs that a bottom is developing. Dr. Nathan Kauffman, assistant vice president and Omaha branch executive of the Kansas City Federal Reserve Bank, recently published a report, “Farm Income Continues to Moderate,” that brought to light some of the details of the current farm economy. He reported the demand for farm loans was continuing to decline, but at a slower rate than previously reported. Non-real estate loans, which included farm operating loans, declined by 16% when compared to 2016 and that was the sixth consecutive drop in loan demand.

Chart 1 in the report indicated that “machinery and equipment” loans had risen over the past month. Is this a harbinger of things to come or is it simply a statistical anomaly? There certainly is little “pent-up demand” in the machinery markets at this time and the continuing decline in farm income does not foretell a hidden demand lurking in the corn stalks. What it does indicate is that there is an underlying need for new equipment even in years that appear as bleak as 2017. A review of our historic data files indicated that tractors and equipment sells at some level even in desperate years and 2017 appears to be the year in this era that is beginning to stabilize. 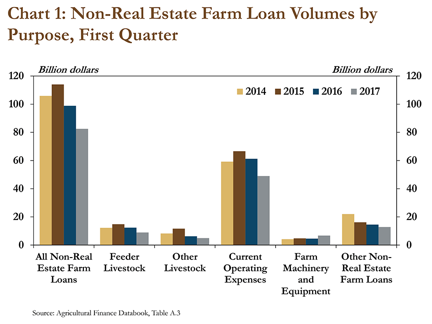 Stabilizing does not mean a spectacular turn-around, but it does indicate that the bleeding is about to stop and healing begins. Farmers, ranchers and other end-users have reduced their costs at every opportunity and that included applying for new loans. The most recent events that resemble the economy we are now experiencing occurred in the 1980s. There was a rapid rise in commodity prices during the late 1970s and a rapid decompression of prices in the 1980s, but farmers then were saddled with overwhelming debt, causing many of them to simply quit farming.

The debt level of today’s farmer is much lower than the farmers of the 1980s and while there is a reduced inflow of cash there is also a corresponding reduced outflow. With commodity prices appearing to stabilize somewhat at the current levels and a world economy that is showing signs of life, this could definitely be a twinkle of light on the farm equipment horizon.

Corn — Planting of this year’s crop is nearly complete with more than 90% of corn acres planted by the end of May. The USDA estimated that there would be around 93 million acres in corn this year and that is slightly less than 2016. Commodity prices eased back slightly in May with the July contract closing at $3.70 and the September contract closing at $3.78. There are some indications that corn could top out this summer at $4.50 per bushel.

Soybeans — Soybean planting is slightly behind corn but the total number of acres is on the rise, much of it formerly in corn production. The July contract closed May at $9.12 and the September contract closed at $9.13. Soybean prices could reach $10 by summer and that could provide farmers an opportunity to lock in prices on a portion of their crops.

I suppose it is a matter of the glass half full or half empty and I just prefer the “half-full” side of that equation. Our models provide very objective data from which to make our assumptions for the coming year and the first 5 months of the year has played out according to the models’ indications last fall. There is no doubt that we are in a difficult period for farm equipment sales, but there is significant evidence that there is a positive change looming on the horizon.