Under 40 Horsepower Tractors — This was the largest retail month for this category since June 2004 with 18,379 units sold in April. Our original forecast called for retail sales of 17,775 in April and our year-to-date forecast is 8.3% below the actual retail number. 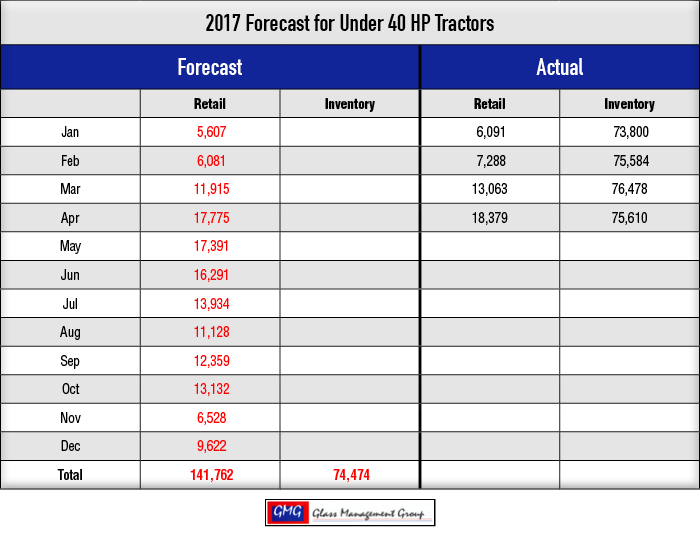 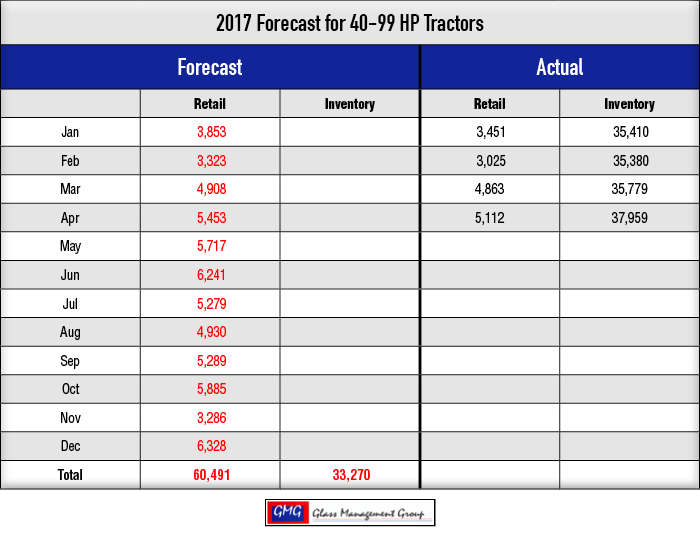 100 + Horsepower Tractors — Retail activity in this category showed seasonal strength but remained below our original forecast. Even though the year-to-date number is about 1,000 units below our YTD forecast, the numbers are inching closer each month and now stand at 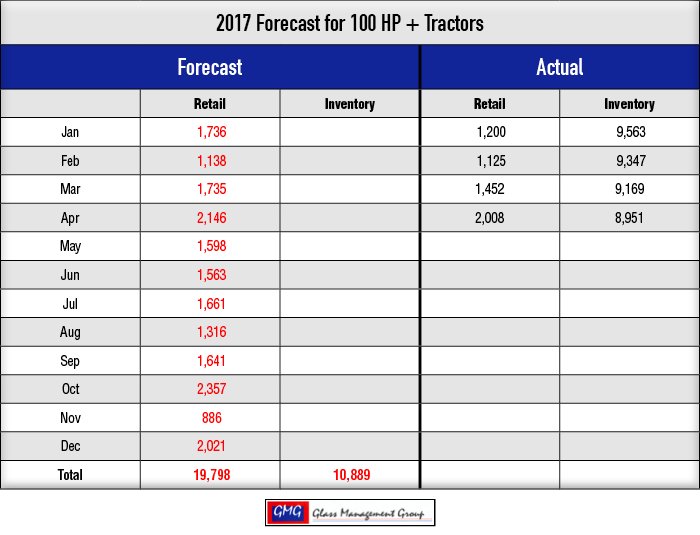 4 WD Tractors — Retail sales for this category remain weak compared to activity several years ago. Actual results of 228 units sold are about 8.8% below our monthly forecast. The year-to-date retail sales numbers are 19% below our year-to-date forecast but picked up more than 4% over the March position. 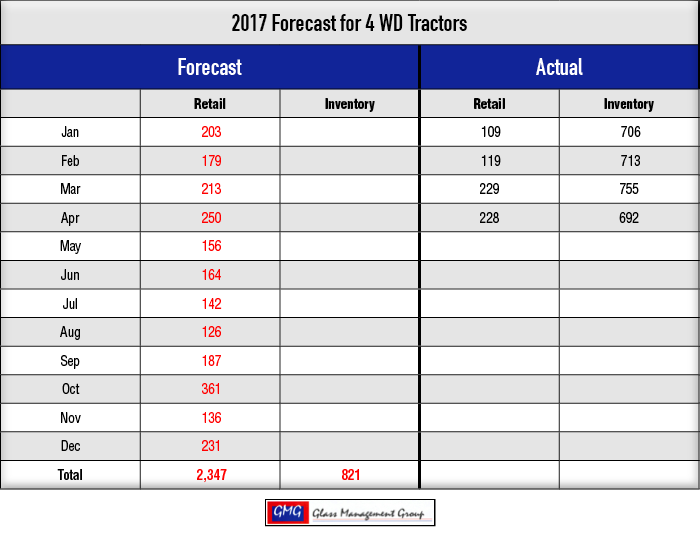 Combines — Retail sales for April 2017 were actually one unit ahead of April 2016, but still show significant weakness. The year-to-date retail sales are still 13.3% below our original forecast but, like the other categories, are slowly moving toward our final annual forecasted number. The percentage closed by nearly 3% this month compared to the March percentage. 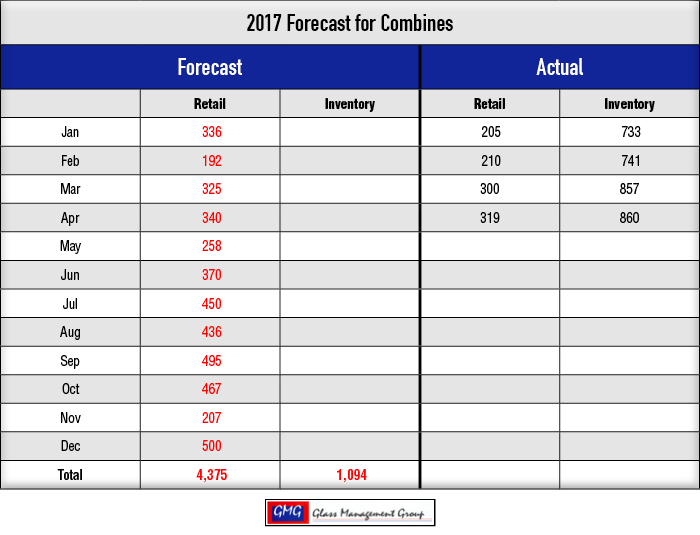 Our investment firm clients come from all over the world and recently I received an invitation to participate with a market research firm from Germany. One of their first questions was what methodology did we use in constructing our annual forecast. They explained their forecasting methods in some detail. I was compelled to tell them that I did not have a classic statistical background and all of the models that we employed were ones that I had developed over the years.

Apparently, they have followed our monthly analysis of the U.S. agricultural equipment markets and asked why we used Net Farm Income instead of Net Cash Farm Income.

The U.S. Department of Agriculture calculates both Net Farm Income and Net Cash Farm Income each year and there is a difference between the two. Net Cash Farm Income is the total cash income that the farm received during that marketing year, which includes the sale of grain inventories held on the farm and is typically has a larger dollar value of the two measurements.

Net Farm Income takes into account the value of the crop produced that year and includes the value of the stored on-farm crops in the current marketing year. This method is considered by many to be the more consistent method of accounting for farm income and is the method we have employed for the past 30 years and will continue to use to maintain consistency in our forecasting methods.

There is some validity in including other income, such as crop insurance payments, in the total available cash each year. The USDA has estimated that 2016 crop insurance payments will amount to $7.8 billion and will be paid to insured farmers during 2017. During a recent conversation with my good friend Dave Kahler, associate director of the United Equipment Dealers Assn., we discussed the impact that this income might have on equipment purchases in 2017. It is his opinion that it would have a positive effect on sales for the remainder of the year.

In a recent paper from the University of Illinois, it was suggested that some of the soybean farmers in the state were considering dropping their crop insurance coverage. With consistent yields and commodity prices holding in a range that would generate a profit, there was the thought of eliminating the cost of crop insurance since they had not filed an insurance claim for the past several years. Farmers around the country are certainly feeling the squeeze of lower commodity prices and rising production costs.

The Kansas City Federal Reserve Bank reported recently that farm loans were declining as both the farmers and bankers were tightening their positions. The debt-to-asset ratio for farmers has certainly risen within the past 12 months and the terms of the loans have extended by about 6 months due, primarily, to the declining value of real estate. Bankers certainly are being more cautious in their lending requirements as they search for the strongest loans available and farmers continue to keep a tight rein on their total cost of operation.

Planting results shows about 46% of the crop has been planted and cooler, rainy weather could be a harbinger of a slightly smaller crop and that could be a positive for prices in the future.

Soybeans — Prices were up slightly from the March close but the current inventory level of old crop soybeans continue to put pressure on current prices. The May contract closed in April at $9.54 while the July contract closed at $9.66 and the September contract is slightly lower at $9.62. These prices continue to be ones that will produce a profit for farmers and worldwide demand continues to be good.

There are definitely signs that there is some strength building in tractor markets as the year continues to progress. Confidence on rural main street remains high even though the political in-fighting in Washington D.C. roils on. This does not mean that there will be a dramatic resurgence of sales in the last quarters of the year but it does mean that we should close the year slightly above 2016. Our Net Farm Income models projected 2017 and 2018 to be a time of consolidation while preparing for growth to come in 2019. Combine sales will continue to be weak during this time and will most likely not recover until there is a decided positive change in commodity prices.