Farm equipment dealers say that end-of-the year selling has kicked in and manufacturers have gotten more assertive in offering incentives in an effort to boost sales.

In the October 2013 report, 24% of dealers reported that manufacturers had become “more aggressive,” 67% said incentives were “about the same” as the previous month, and 9% reported the OEMs were “less aggressive” with incentives.

Other significant trends reported by U.S. and Canadian dealers this month included:

Industry Sales Increase in September: Dealers reported year-over-year sales grew 4% on average in September, up from 3% in August. Shortlines dealers saw the highest growth at 11%, while AGCO dealers showed the weakest with sales down 3%.

2014 Dealer Outlook for Flat Revenue vs. 2013: For 2014, dealers outlook is for a flat sales growth, up slightly from the –1% outlook reported last month. 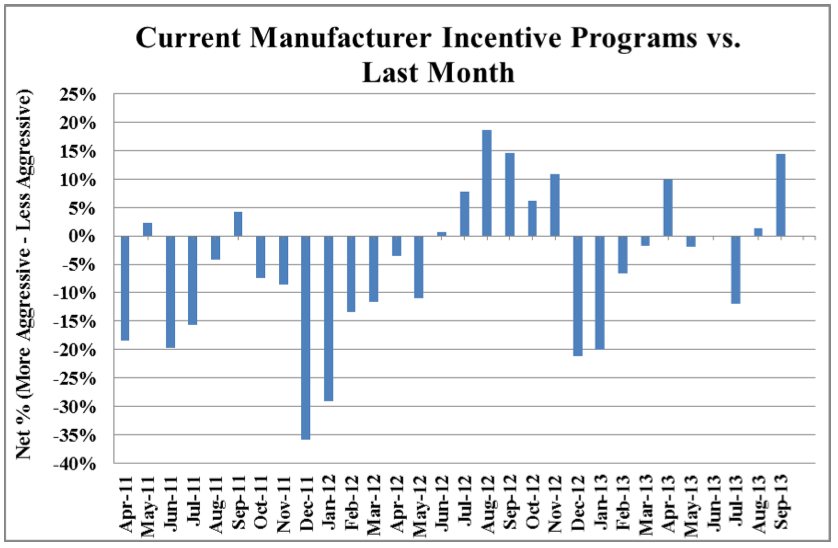 Used Combine Inventories Issues Remain a Headwind: Within the used equipment categories, a net 59% of dealers reported used combine inventory levels were “too high” (59% too high; 41% about right; 0% too low) in August. This is the highest net percentage of dealers reporting high used combine inventory since we started tracking this data point in October of 2011. It was even above last month’s net 54% responding “too high.”

Some dealers are also expressing growing concern with the lower crop prices that they’re seeing during the past few months. One farm equipment retailer said, “I am becoming more concerned about lower crop prices. I think there is going to be a cash squeeze for a period of time as cash rents and land values will have to adjust to these lower prices. Farmers may not want to quit buying iron, but their banks will.”

OEMs Ramping Up Incentives on Parts and Equipment