OEMs Ramping Up Incentives on Parts and Equipment

Four of the last six months (through September), dealers are reporting that their equipment suppliers are offering more incentives to move wholegoods and parts than they did during the previous year.

According to the most recent “Dealer Sentiments & Business Conditions Update” report, a net 15% of dealers report that manufactures have become more aggressive with incentives in September (26% more aggressive; 62% same; 12% less aggressive). This comes on the heels of a net 19% of dealers who reported manufacturers were more aggressive in August. Ag Equipment Intelligence and Cleveland Research Co. conduct the survey monthly.

And it looks as though that trend may be accelerating, as both AGCO and John Deere announced in the last week end-of-year incentive programs on both whole goods and parts. Through the end of the year, AGCO is offering customers 10% off all genuine AGCO parts, oil, filters and select oil change accessories they purchase at participating locations, which will earn them AGCO Parts Cash that can be used to enter a sweepstakes to win up to a Big Box Tool Chest ($1,500 value) or 150,000 in AGCO Parts Field Rewards Points. John Deere announced major incentives on its entire line of compact and utility tractors and pull-type hay tools purchased through January 31, 2013. As part of Deere’s Green Fever sales program, a number of equipment models are available with 0% for 60 months financing. 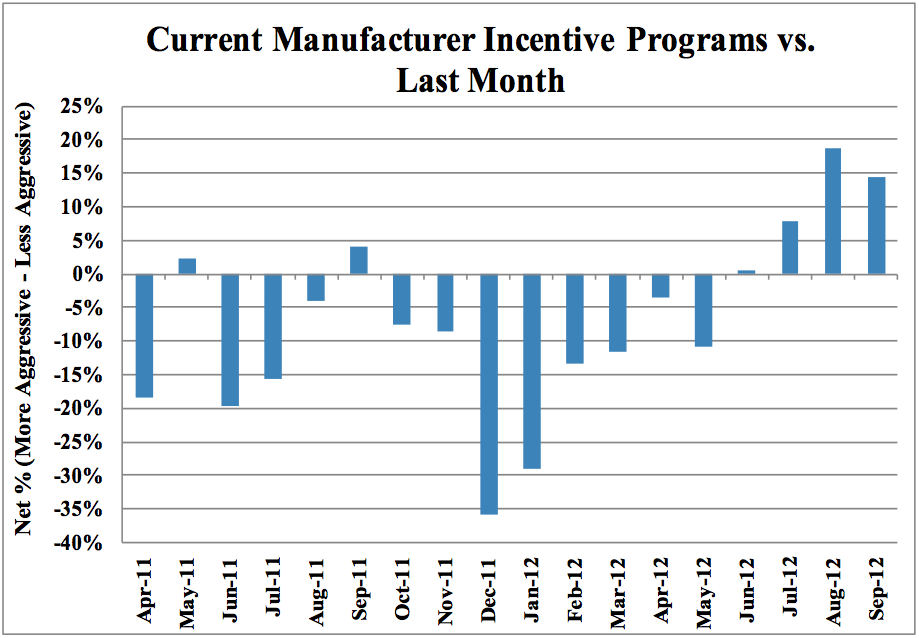 AGCO Offering Incentives to Stock Up on Parts