Floyd Helmuth’s father, John, began his Kalona, Iowa, shortline dealership in 1956 by becoming a dealer for Art’s Way Manufacturing. Helmuth says the family was farming at the time and John drove up to Armstrong, Iowa, to meet Art Luscombe in his shop to see the first grinder mixer prototype.

“My dad had an idea for something similar and told Art that he was actually further along in the process, so he would sell them for him,” says Helmuth. “And that’s how it started for us.” The first grinder mixers were delivered directly into Kalona on rail car, and John would drive to meet the train, then add wheels and tires at the station and haul them home. He passed away in 1992, but his legacy was honored when Helmuth Repair received a 50th Anniversary plaque from Art’s Way the same year it celebrated 5 decades of business too.

Today, Helmuth Repair continues to be Art’s Way’s oldest dealer and Floyd runs the business his dad began when he was just a toddler. He says the Helmuth family’s goal to take excellent care of their customers, have parts on hand and be a leader in shortlines has not changed.

“I’ve been told fairly recently by companies to not have a lot of parts and just opt for next-day air,” Helmuth says. “But you when you have parts, you sell them. We have parts for some of the oldest grinders that were built. We just do it even if it may be crazy. Our goal is to have parts for what we sell.”

He says the dealership does attract customers for that reason alone, as well as its caring demeanor when it comes to loaning equipment to those in a pinch or waiting on parts not available in Kalona.

The Success in Shortline Machinery series highlights the best practice strategies employed by top farm equipment dealers to promote and sell shortline equipment. It is brought to you courtesy of Art's Way Manufacturing.

Art’s Way Manufacturing is a proud Iowa manufacturer of specialized ag equipment including grinder mixers, hay/forage equipment, bale processors, manure spreaders, and land engaging products.  Built on a 60 year tradition of quality, we have recently implemented our Continuous Improvement program.  If you are seeking to grow in 2018 with Art’s Way’s quality products and service, please contact our Customer Service Center for your area representative at 712.864.3131 ext. 1 or via email at marketing@artsway-mfg.com.

With a diverse customer base, Helmuth says a fully stocked service truck with a welder, air compressor, torches, etc., also is a must and something people truly appreciate. The local area is very livestock driven, but also heavy in crops and hay production, who need equipment working around the clock.

He believes they are partners with their customers, in good times and bad. Because of this, Helmuth says they do a lot of trades, working on a piece of equipment in the shop until they are certain it’s ready to go. 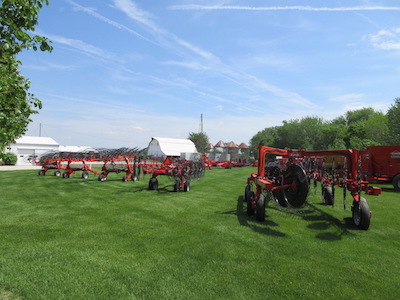 While the customer service aspect of the dealership has not changed through the decades, other things have, says Helmuth. Two employees were running the show in his dad’s days, but now there are 10. Helmuth Repair also has added other lines, the major being Knight and then Kuhn, and now Kuhn Knight. This is their biggest line of equipment at the dealership today, and Helmuth also sells Roto Grind hay processing equipment, Pik Rite manure spreaders and Anderson bale wrappers.

A unique niche has been Honda replacement engines, which he sells mostly online.

“What we don’t do are tractors and combines and skid loaders,” Helmuth explains. He says they also don’t carry extensive tillage equipment, but when it comes to hay equipment and equipment for feeding animals and spreading manure, Helmuth offers customers the products they need for those tasks.

“We’re taking care of the feeding process from beginning to end,” he says with a laugh.

Helmuth says scales have become a high-sales item for the dealership too. They weigh the feed in and out, even are being used on manure spreaders, he explains. He likes to keep loaner scales on hand so that if a customer is down, they can continue weighing until repairs are made.

When deciding on a new product line, Helmuth says customer demand is really the driving force for those decisions. He says it’s not easy to choose because he wants to make sure parts come with it, and notes that it’s easier to get into a product than it is to get out of it.

“You will then have customers that are not very happy if you just drop a line,” Helmuth explains. “It’s a tough call to make. If we hear that something is needed and not available nearby, that helps me decide.”

Manufacturers Must Step Up Too 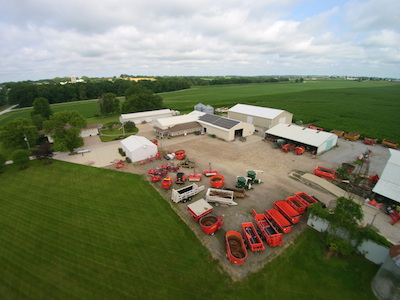 Helmuth says that while his customers expect him to carry parts and be available, as a shortline dealer, he expects the same from the manufacturers he chooses to do business with.

“I do expect them to have the parts I don’t have and the ability to ship them out the same day,” he says, adding that it’s important to be able to tell a customer the timeline for the replacement part(s).

“The face of farming has changed,” he continues. “It used to be 20 years ago, customers would tell me they’d borrow their neighbor’s equipment, but that’s not happening like it used to. The neighbors likely don’t have a machine they need.”

The other factor, which tips in a manufacturer’s favor, is keeping up with technology. Helmuth says Kuhn Knight and Art’s Way are truly doing this with their ever-increasing automated capabilities, digital scales etc. “I think technology is key for the manufacturers. If they don’t’ get it done, someone else will,” he adds.

Training for all departments is something he appreciates from the manufacturing side. From sales to service, Helmuth says that the lines he works with offer this level of commitment to their dealers and help ensure success all around.

He says the leadership at Art’s Way has had the same service-minded approach for all these years and not lost it through the market’s ups and downs.  When it comes to shortlines, Helmuth says they aren’t going anywhere anytime soon. “There’s always going to be a need and there’s not one brand that has everything a farmer will need,” he concludes.

Shortline Veterans in Illinois Stands by Values into Third Generation

Shortline Partnerships: Nine Ways to Get Your Dealers to Represent You the Way You Want