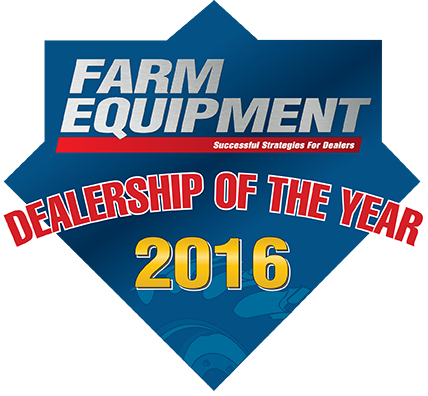 Despite the downturn in the ag economy, the independent judging panel once again had an impressive pool of candidates to choose in naming as this year’s Dealership of the Year recipient. Commenting on the pool of nominees the judges say, “We feel all nominees have done a very good job in profitability in view of the ‘down’ year in agriculture.”

After comparing all of the nominees, the judges made their choice and Farm Equipment’s 2016 Dealership of the Year is Van Wall Equipment, a John Deere dealership based in Perry, Iowa, with 16 ag locations. In addition to its ag equipment stores, Van Wall also boasts 2 power sports stores, 2 material handling, 3 Golf & Turf and 2 CCE stores.

Dealership of the Year 2016 Judging Panel

The challenging task of choosing Farm Equipment’s annual Dealerships of the Year falls on three highly experienced and qualified individuals who comprise the Dealership of the Year independent judging panel. Not only do these experts take on the responsibility of choosing the top dealers each year, but they also advise and give guidance to Farm Equipment’s editors on criteria for the program.

Read about the judges

Combined, these 3 dealers accounted for $659,550,790 of total revenue in 2015. Revenue per employee came in just shy of $740,236 for the group. Together, they also produced an average parts and service absorption rate of 80.3% for the year. Return on assets for these top dealers averaged 5.3%.

As for the 2016 Dealership of the Year, Van Wall produced a ROA of 12% and an absorption rate of 105%, both the highest of all nominated dealers.

Farm Equipment’s Dealership of the Year program was established in 2005 “to elevate farm equipment dealerships that are leading the industry in best practices, operations management and customer care.”

Since that time, 24 dealerships from the U.S. and Canada have been honored as Dealerships of the Year. They are joined by 37 dealers who have been recognized as Best-in-Class dealerships. Together, these dealerships make up Farm Equipment’s Dealership of the Year alumni group and are instrumental in nominating their fellow dealers for recognition.

“We were honored to receive the Dealership of the Year honor and humbled that we would be selected from so many fine dealerships. The award affirmed the efforts of our team to grow our business and care for our customers. It was a pleasure presenting the award to them. We also received congratulations from many of our long-time customers and suppliers who shared in the enjoyment of recognizing how hard everyone has worked to be a top class organization with which to do business.”

“Being named Dealership of the Year brought a great sense of pride to the entire dealership and has only increased my appreciation for the team working at Salem Farm Supply and for the significance of good human capital at a dealership. Dealerships of the Year are built on good ideas and good people. I am grateful that Salem Farm Supply has both.”

READ ABOUT THIS YEAR'S WINNER DEALERSHIP OF THE YEAR ALUMNI GROUP

Nominate a dealer for 2017 Dealership of the Year