Under 40 Horsepower Tractors — These smaller tractors had a good month in retail sales missing our monthly forecast by 398 units and the year-to-date total came within 150 units of our total forecast YTD. 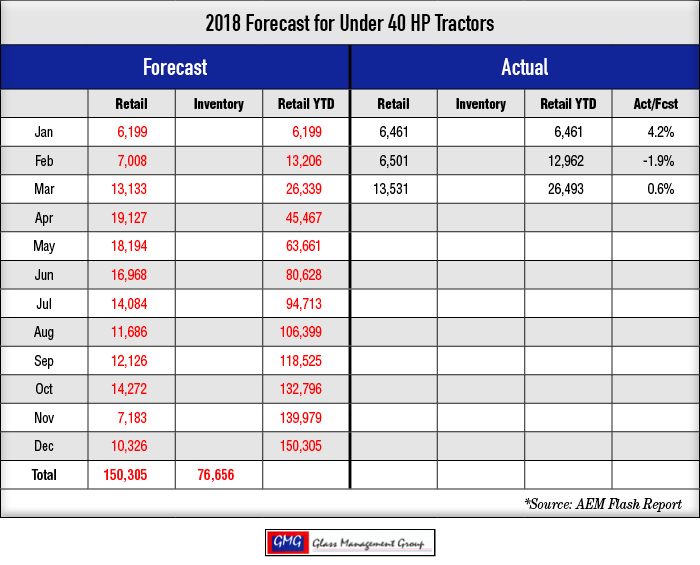 40 to 99 Horsepower Tractors — This category of tractors had retail sales that came within 130 units of our monthly forecast and moved closer to our YTD forecasted volume. 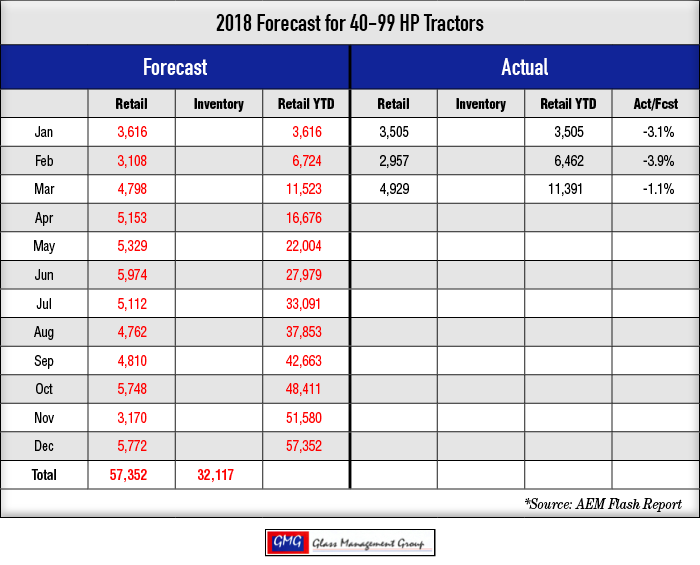 100+ Horsepower Tractors — These larger tractors had a good retail sales month and came within 31 units of our monthly forecast while edging closer to our YTD forecast. 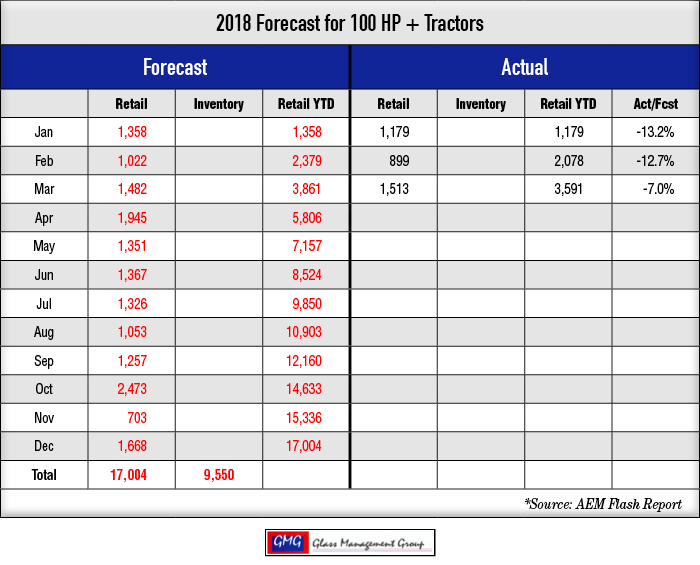 4 WD Tractors — This largest category of tractors came within 3 units of our monthly forecast and is only 50 units below our YTD forecast. 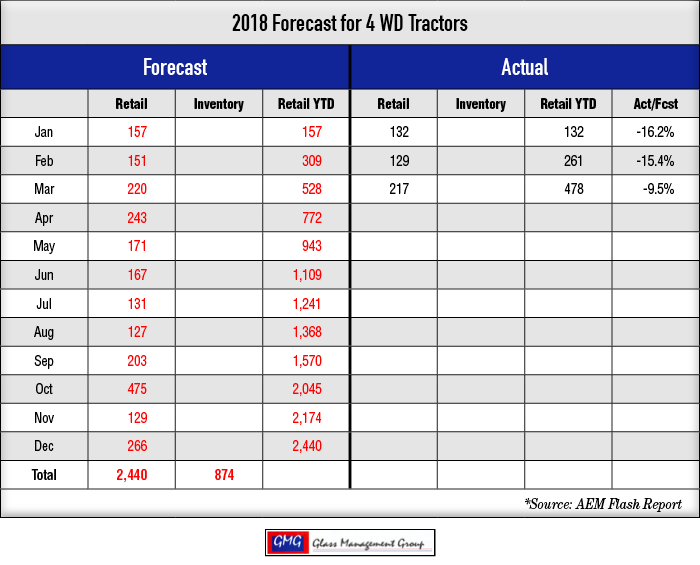 Combines — Combines came in 42 units below our monthly forecast but is closing in on our YTD forecast being only 9 units below the forecasted volume. 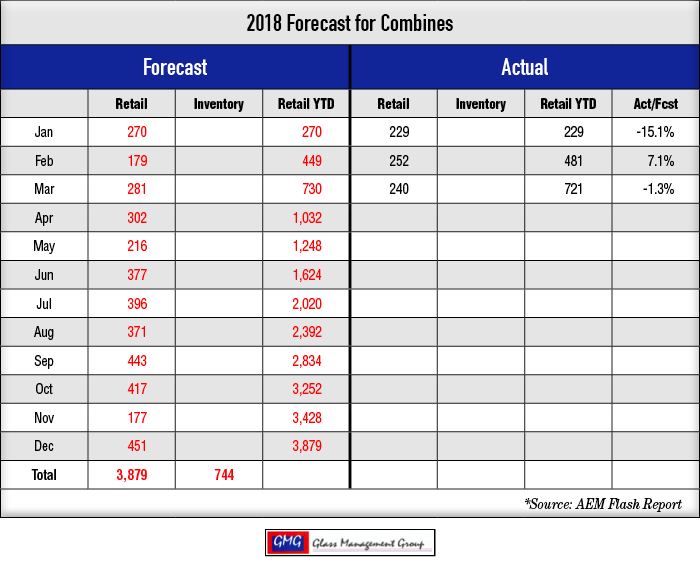 Placing tariffs of 25% on steel and 10% on aluminum has raised the threat of a trade war with our trading partners around the world. Agricultural commodities represent a significant portion of our annual trade and they could certainly be a target for those countries affected by the current new tariffs. A trade war could absolutely have a negative effect on U.S. producers’ income in the future, but are there other circumstances to consider?

There are already a number of tariffs and taxes charged on U.S. agricultural products imported into the various countries. England has a standard 12.5% import tax on all commodities arriving in that country and the European Union has a number of tariffs on various U.S. commodities sold to member countries. Japan and China both impose significant tariffs and other restrictions on some U.S. agricultural products with the purpose of supplying their needs but limiting the flow of U.S. grown commodities.

China is currently the number two purchaser of U.S. agricultural products and appears to be the target of the recently enacted tariffs. In December of last year, China changed their specification for soybeans from the U.S. so that they were effectively buying number 1 soybeans at the price for number 2 beans.  Number 2 beans could contain 2% foreign matter, but China raised that level to 1% maximum. These new rules would not apply to soybeans shipped from Brazil or from Argentina.

Even though China is not a leading exporter of steel and aluminum into the U.S., their international pricing policies have been the driving force in lowered prices for those commodities. China has announced retaliatory tariffs on several agricultural products but the most difficult one is on pork products sold there. China is the number three purchaser of pork from the U.S. and any reduction in those purchases will have an immediate effect upon the income for U.S. pork producers.

The real concern now is what actions, if any, China will take against U.S. produced soybeans.  China currently purchases about 20% of all soybeans exported from the U.S. and any reduction in those numbers will certainly have a negative effect upon farm incomes in the coming months.

China has been a member of the World Trade Organization since December 2001. In the ensuing 15 years, there has been a dramatic growth in the middle class among their population.  These consumers have grown accustomed to purchasing high quality meats that were fed U.S. produced grains and the question that remains is this: will those consumers continue to demand these products?

China has also placed an additional $0.15 tariff on U.S. produced ethanol, raising the total tariff to $0.45, this in spite of a recent governmental edict that all gasoline sold in the country must contain a mixture of 10% ethanol. Domestic suppliers can fill current needs but, with growing demand annually, it is anticipated that they will go to the international market by 2019 to supply the ever-increasing needed fuel additive.

In the short term, things could get difficult for U.S. agricultural producers and purchasers of U.S. farm equipment could get cold feet very quickly, especially in the higher horsepower ranges. The U.S. economy continues to build momentum and in a recent report from Business Insider, nearly 90% of workers earning $25,000-$250,000 in annual income received an increase in their paychecks in 2018 due to the new tax law.

The fourth quarter of 2017 closed with GDP growth of 2.9%, which is nearly double of what the previous administration had pronounced as the “new normal.” GDP growth in 2018 is anticipated to be above 3% for the year. Historically, the U.S. agricultural economy trails the general economy by about 18 months and, with the growth shown in the latter part of 2017, there are indications that 2019 should be a year of modest growth in equipment sales.

Corn — Corn prices rose during the month of March and China’s purchases continued to be rather substantial for the month.

These prices remain below the average break-even point for most U.S. corn producers.

Soybeans — China also remained active in the soybean market through the end of March according to USDA’s weekly export shipment report.

These prices continue to keep soybean farmers in the black for the current time.

Even though China has now announced their intention to place additional tariffs on U.S. produced soybeans, they are still faced with a monumental task of feeding nearly 2 billion people in their country. The continuing drought in Argentina has reduced their ability to export agricultural commodities this year and the current political unrest in Brazil is impacting their exporting activities. Brazil is the second largest soybean producer in the world and certainly will be able to take advantage of the current dispute between the U.S. and China.

The only bright spot is there is a “cooling off period” of 60 days before these tariffs actually go into effect. There could be some positive negotiations taking place during that time.