By Mike Lessiter posted on May 24, 2022 | Posted in Manufacturer & Dealer Issues, Operations & Finance

Former dealer Lee Prunty paid a high price due to a fraudulent situation that he says could’ve been avoided entirely and could ‘still bite someone else again.’ Matthew Larsgaard, dealer association exec, adds his thoughts on lack of titling in farm machinery business.

Editor’s Note: Two recent cases of fraud at equipment dealerships remind the entire industry of lessons to learn from one of the industry’s biggest black eyes in history, more than 15 years ago in Iowa ... the Walterman Implement fiasco. 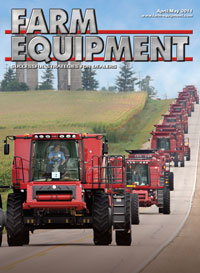 “Your story should really be about how the sale of any motorized piece of farm equipment should have to have a title,” Lee Prunty told Farm Equipment in an October 2021 phone interview as Farm Equipment revisited the Walterman Implement mess 10 years after its in-depth coverage of how CNH and Titan Machinery unwound the infamous combine roll, bankruptcy and fraud mess left in Dike, Iowa.

As a result of being implicated with his trading partner Leon Walterman of Walterman Implement, Prunty lost his Case IH contract at Walker-Schork International (WSI) in Rochelle, Ill., (acquired by Johnson Tractor). Later, he was sentenced to 12 months for aiding and abetting bankruptcy fraud in the Walterman Implement in 2005.

Prunty maintains his innocence, and that he had no choice but to plea guilty due to his inability to defend himself. The 73-year-old Prunty, living Northern Illinois, was candid in answering questions. He also had plenty to say about how the entire mess could’ve been avoided -- for his business, the farmers involved, Case New Holland and Walterman himself.

Titling is Absent in Farm Machinery

“You can’t buy a $500 car without a title, but you could buy up to a $1 million combine without one,” says Prunty. “Had titles been in place, none of this ever would have happened.”

He adds, “This will end up biting someone else in the same way.”

When asked why titling doesn’t exist in farm machinery, Prunty replies, “I haven’t a clue. My dad was an automotive dealer and it’s been present in auto sales since the 1950s. You can’t buy a $500 wreck without a title; you can’t even take one to the junkyard without a title. It absolutely makes zero sense.

“If titles had been required in farm machinery, none of this would have happened. Leon couldn’t have done what he did if titles were there. I wouldn’t have had to pay anything back if titling had existed. It’s sinful we don’t have it. I can’t believe lending institutions aren’t fighting the battle to no end to include titling.”

Prunty says it’s an industrywide issue and the dealer associations should make it a priority. “I used the term ‘motorized farm vehicle’ because of the dollars involved. But corn planters have huge values today, and grain carts are not a cheap date anymore.”

As Prunty puts it, “The industry should be solving what keeps making holes in the ship. Why is the ship getting holes in it?”

Looking back on what happened in Iowa, and to him, he says, “Leon Walterman could sell ice to an Eskimo, but no one could say that the ice wasn’t tainted. There should have been rules in place. He’s not the only person who has done something like that.”

Message boards cite memories of other instances of fraud that may have been long been forgotten about. Yet fraud by dealers continues to make news, including Nashville Tractor Inc. in 2021 and Venture Equipment in recent weeks.

In a separate interview, Steve Swartzrock of Swartzrock Implement Co., Charles, City, Iowa, added to the titling dialog. “Even to this day, you can’t truly know if there’s a lien against a machine,” he says. “For instance, even on a $1 million Deere X9 combine (which as of May 2022 was advertised for $700,000 for a 300-hour machine), you can’t be 100% sure that it’s a clear title.”

Titling in the Automobile Sector

“Consumer protection is big, and with motor vehicles there are a lot of potential customers,” he says. “It’s a highly regulated sector of the economy with vehicles moving all over the place.

Titles, Larsgaard says, gives the buyer an idea of where that car has been, whether it’s been damaged, such as flooded or salvaged, and identifies the ownership. It keeps an individual from selling a vehicle they don’t own.

“It helps lenders too, as some states allow lenders to hold the titles. Titles help to move vehicles through the cycle of commerce in a more transparent manner. There’d be a much higher probability of a flawed system and people getting fleeced in motor vehicle transactions if titling weren’t present.”

When asked about dealers’ opinion, Larsgaard says it’s a mixed bag. Some dealers are for farm equipment titling and some are against it. “We might want it if it would help identify market share, as we’re sometimes questioning the major manufacturers on the market share issue. For example, if titling existed, it would allow anyone to go into state records and see all the 4WDs sold.

Farm Equipment asked Jim Walker, retired Claas, AGCO and Case IH executive, about the titling issue. “This is the common practice in Europe due to the extensive utilization of public roads by farm machinery,” he says. “I don’t know why this would not be a practice to follow in the U.S., but it was never a discussion point during my time on the AEM Executive Board (2013-2018).”

“That would likely then be the number that the majors would be comparing our dealers against. Because right now, a dealer can be terminated for being behind on market share, but it’s hard to prove. Market share transparency would be a helpful byproduct of titling.”

Titling would also cause additional work for dealers, he says. “To sell a machine, the dealer would need to be able to find the title, which can sometimes be challenging. Lost titles are another issue that requires the dealer to work with the customer to apply for a duplicate title, which includes producing documents to certify ownership. In addition, lenders may be reluctant to release a lien when there is a question involving lien priority when something like a mechanic’s lien is in play. In some cases, titling can be a time-consuming headache, and dealers would certainly need to hire title clerks to track everything down and then process the title applications.” He adds that in recent years some states have been months behind in processing automobile titles.

The advantage to the dealers comes in down economic cycles, he says, when farmers are more apt to be filing for bankruptcy. “Titling would produce significant benefits to dealers as it relates to the problems associated with blanket liens,” he says.

States may enjoy a titling requirement for farm equipment as it would generate additional sales and use tax nuances, Larsgaard says.

But for titling to become a reality, manufacturers would need to standardize things like the vehicle identification number that exists among all auto manufacturers. Larsgaard couldn’t venture a guess on how tall an order that would be among the farm machinery manufacturers. And then there’s the question of which units would require titles, and which wouldn’t. “Where would you draw the line? Motorized equipment of greater than 40 horsepower tractors? What about implements?”

In the end, he says, manufacturers will likely be inclined to follow the farmers’ view on the issue. “But there’s probably little benefit to the farmers. The farmers want Uncle Sam out of their life, not further into it.”