15 years after the unraveling of Walterman Implement, Farm Equipment interviews former Illinois dealer Lee Prunty who was sentenced as part of the landmark suit.

Editor’s Note: Two recent cases of fraud at equipment dealerships remind the entire industry of lessons to learn from one of the industry’s biggest black eyes in history, more than 15 years ago in Iowa ... the Walterman Implement fiasco.

In late 2021, 10 years after its in-depth coverage of the 2005 unraveling of Walterman Implement’s (WI) infamous combine roll, bankruptcy and fraud mess left in Dike, Iowa, Farm Equipment reached out to dealers close to the WI situation in the early 2000s. More than one indicated they didn’t know whether what Lee Prunty, president/CEO of Walker-Schork International (WSI) initially got caught up in with Leon Walterman and WI was illegal — or ignorant. 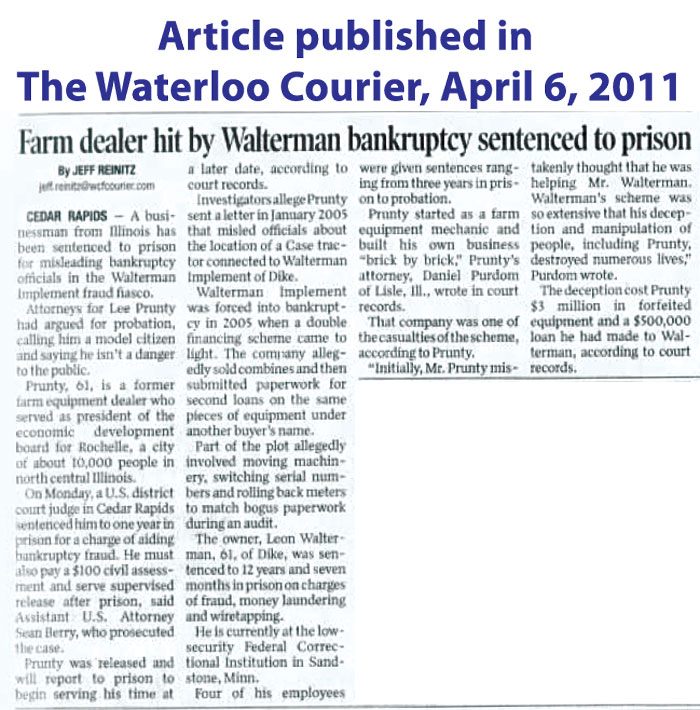 But according to court documents, Prunty’s crime was a false reply to a bankruptcy trustee about the whereabouts of a Case IH STX375 tractor he’d obtained from Walterman.

If that’s what happened, Prunty is living proof of the risks of masking the truth on another’s behalf.

Prunty had no prior criminal record and had been a community leader and model citizen, according to documents presented to the court.

Despite Prunty (now 73 and living in the Rochelle, Ill., area) saying at the beginning of the October 2021 phone interview that he wasn’t interested in talking about the situation 11 years after his guilty plea, he responded to nearly all Farm Equipment’s questions. He repeatedly offered his suggestions on a what a better angle was to the story (read about it here)

Only when he asked of CNH’s role in the situation and/or the names of executives would he reply with a stern “no comment.” He added, “And those guys are all gone and/or retired by now. You’re not going to get anyone to risk their pension talking about it now.”

According to LinkedIn, Prunty joined WSI as a salesman in 1978. In mid-1985, he and two other employees purchased the dealership from “friend and mentor Jim Walker (not to be confused with the former Case IH vice president of the same name who would arrive at Case IH after the Walterman bankruptcy).” Prunty became president/CEO of the dealership following the acquisition.

“Every attorney I spoke to said to file for bankruptcy. Bankruptcy was not in my DNA…”

He had additional businesses interests along the way, including helping launch Dawn Equipment as a founding partner in 1991.

Prunty characterized his relationship with Walterman as “professional only,” though a document submitted to the court by his attorneys indicated he “mistakenly thought he was helping Mr. Walterman.”

After things in Dike, Iowa, began unraveling in late 2005, Prunty was hit with a CNH audit. “They came in and said, ‘This equipment belongs to us.’ Basically, their losses trumped my own. Just to be proactive, I said, ‘I’ll liquidate,’ and I paid twice for some of the same equipment. I paid as much as I could so that my customers wouldn’t lose what they bought from me. CNH said they wouldn’t go after any more.”

Court documents showed that he would lose about $3 million in forfeited farm equipment for which he had fully paid, including $2.4 million to CNH in a civil settlement agreement.

In short order, Case IH canceled WSI’s contract. “A separate team — all strangers to me — came in. I was never asked a single question. The company reps couldn’t believe it. I’d been one of the top dealers up until that point.”

After losing his mainline contract, Prunty tried to make it as a shortline dealer for a while. He said he knew it wouldn’t last; it was only until a matter of time before CNH would fill the territory. He kept his doors open for a year hoping to find a buyer. “There were some prospects, but CNH always said, 'that’s too far away' or 'that option isn’t good for territory,' he says. He visited with Leo Johnson at Johnson Tractor several times, which was his only choice, and he sold to Johnson Tractor in October 2006.

“CNH said it had to be a contiguous territory, so Johnson was the only game in town.” When asked if it was fair negotiation, Prunty agreed it was due the priority placed on his people. “What was most important was that I wanted every one of my employees to have a job if they wanted it. To this day, that’s still true of my older employees.

“But there was no blue sky. I got fair value of the real estate, and Leo got to pick and choose the assets that he wanted. He bought very little rolling stock and zero parts. Case was going to give him brand new parts with no terms, so he didn’t need mine. Luckily, I had 2 warehouses across the street.

“I had $1.5 million in parts and went to work returning/liquidating on my own. All my used equipment went to a neighbor who had a lot where I could park the equipment, and I sold it over 5 years.” The last of the parts was auctioned off in 2011. 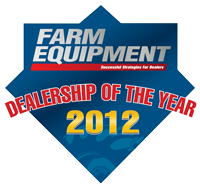 Leo Johnson, recently retired from Johnson Tractor (JT), Janesville, Wis., says he found out that WSI (Rochelle, Ill.) and CNH were parting ways via the same March 2006 letter than WSI’s customers received. Johnson says CNH asked if he wanted the territory. He proceeded in acquiring the territory in October 2006 and officially entered the Illinois market.

JT and WSI hadn’t competed against each other much up to that point. WSI was selling a few parts up in Wisconsin. Meanwhile, he says his dealership would answer the phone from farmers in WSI’s territory but weren’t actively down competing south of the state border. 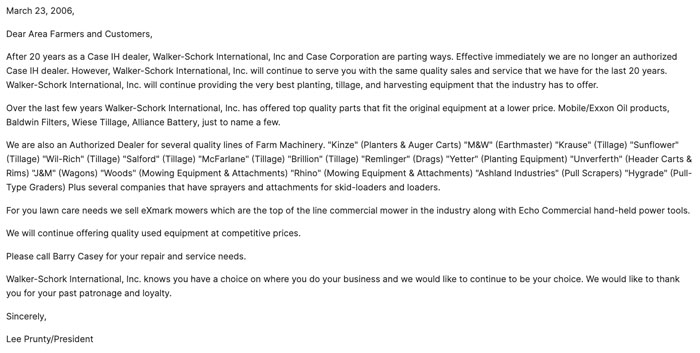 Lee Prunty, Johnson recalls, was ahead of the times when it came to systems/processes, admitting that JT was “just selling iron” at that time. Prunty had bought 2 other stores, Freeport and Sycamore and consolidated them into Rochelle. “Lee had read the market and reacted. He was no dummy; I respected what he was trying to do.”

Of all the acquisitions JT has done, Johnson says, “We were never so welcomed as we were in Rochelle. They knew there’d be someone there to take care of things after WSI had been terminated.”

Not unlike how Titan was received in Iowa after taking over Walterman’s territory, the incoming dealer benefits from some “halo quality.” Johnson says it was a hero-type situation.

After the sale, JT had full access to WSI’s parts warehouse across the street. “We could go in and pay for something we needed,” Johnson says. “It was a good working relationship.”

JT was selected by an independent panel of judges as the 2012 Farm Equipment Dealership of the Year.

“Every attorney I spoke to said to file for bankruptcy. Bankruptcy was not in my DNA. I’ve had customers file bankruptcy and remembered how it felt. How could I turn around and do the same thing? I was not going to do that. It took me 11 years, but I paid off the last note.”

Charges & Why He Pled Guilty

The feds came in, Prunty says, “right before the statute of limitations window was about to expire.”

Prunty insists that he was an innocent casualty of Walterman’s deceit.

“I learned that once the FBI thinks you’re involved, they won’t quit. I pled guilty to get rid of the case. They said, ‘We’ll spend $1 million to prove you are wrong,’ and I didn’t have $1 million to spend defending myself.

“They had all my canceled checks to Walterman and lists of all the equipment I bought from him. They said there are liens against them. I was told the equipment was lien-free, but they said, ‘You’re liable because you’re the one buying it.’

“I showed pages after pages of canceled checks, all endorsed by Walterman. But this was across state lines, making everything worse.

“It cost me my career, and I had to liquidate.”

On April 4, 2011, Prunty was sentenced to serve 12 months at the Federal Prison Camp in Duluth, Minn., a minimal security facility. He reportedly faced up to 5 years in prison and a $250,000 fine but avoided restitution at the request of the prosecution team, he says. Court documents submitted by his attorney showed that neither the bankruptcy trustee nor Case IH claimed monetary loss and a right to restitution.

“The judge wanted to require restitution. But the federal prosecutors insisted that I be kept off the restitution list because I liquidated.”

The two others involved with Walterman, Prunty says, weren’t as lucky. “Restitution affects everyone in the food chain,” Prunty says. “That $10 million is a lot to pay for those other two convicted with Walterman. At least I could get back to work and use my income to pay my debt. Those two will have to pay forever for Leon’s screwup.”

Farm Equipment asked Prunty about his losses, which his attorney’s presentencing investigation stated were $4 million (“his victimization by Walterman has resulted in approximately $4 million in losses.”). “It was more like $4.5 million,” says Prunty. “I was upside down. I had enough good friends to loan me the dollars to get through.”

On the $500,000 loan to Walterman that was cited in court documents, Prunty called it a purchase. “I thought he was a friend until I discovered far later on that he wasn’t paying his creditors. A big part of our growth was buying used equipment from other Case IH dealers’ ‘like-new’ used equipment. We were gaining market share and really growing the business, even out of Canada.”

What Prunty is Doing Today

Prunty’s LinkedIn account lists him as partner-member of Bonterra Group (a company focusing on disruptive technology innovations for the ag, construction and mining industries), but he says he’s not generating enough revenue to pay taxes. According to a search on Justia’s legal site, his name appears on three ag-related patents filed in 2017.

“I’ve been helping friends who helped me. I mow grass.”

He says he lives in a house with “plywood floors and sheetrock walls” but says what mattered most to him was paying his debts.

“I walk down the street with my head held high,” he says, and doesn’t hold a grudge against CNH today. “It’s water over the dam. I have no feeling of being at fault, but I couldn’t win; it was impossible.” He says he was not in on the combine roll fraud at all. “Zero. Zip. What was going on there had nothing to do with me.”