“While the adoption of IFRS 16 added a measure of financial complexity in the quarter, I am pleased with the underlying business performance in our key areas of focus. Our used agriculture equipment sales set a Cervus record for the first quarter and reflects the timely refurbishing and focused marketing of machinery taken on trade during the record new equipment sales of 2018. The first quarter also demonstrated our progress growing customer solutions; the parts, service, rentals, training, and storage aspects of our business,” said Graham Drake, President and CEO of Cervus. “Our Transportation dealerships experienced increased lead-times for factory deliveries shifting the timing of some sales to later in the year. The segment generated gross profit consistent with the same period in 2018 due to improved performance in our parts and service departments. In our Industrial segment, equipment sales more than doubled on a same store basis compared to the first quarter of 2018, and customer solutions revenue increased across all departments. I believe our commitment to efficiently and profitably delivering on our customers’ expectations will be a key factor in Cervus’ continued success in 2019.”

Highlights for the Quarter:

Adjusted loss before income tax expense(1) increased by $2.4 million in the first quarter of 2019, comprised of $0.7 million in Agriculture, $0.8 million in Transportation, and $0.9 million in our Industrial segment. Of the total increase, $0.8 million related to the adoption of IFRS 16, and $0.7 million is due to the non-continuance of the construction dealerships in the current quarter. 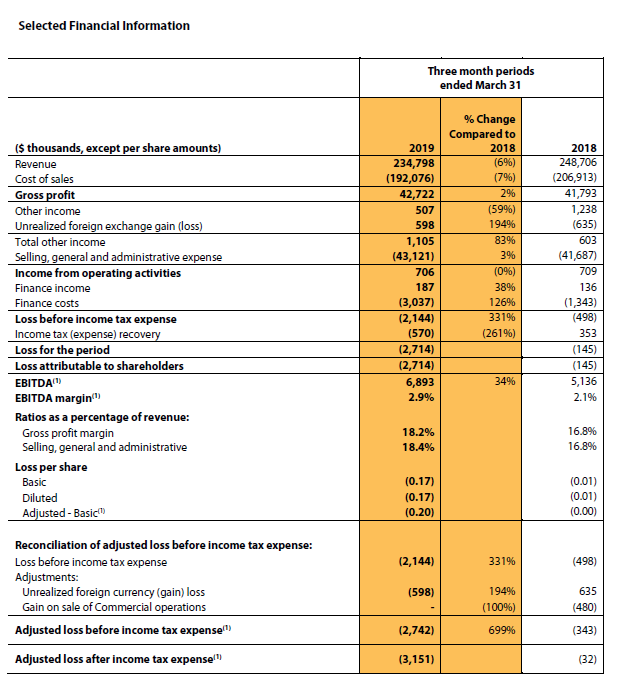 (1) These non-IFRS financial measures do not have any standardized meaning under IFRS, may not be comparable to similar measures presented by other issuers and are defined and reconciled to their most directly comparable IFRS measure within Cervus’ Management’s Discussion and Analysis for the quarter ended March 31, 2019 under the section “Non-IFRS Financial Measures”, which is available electronically at www.sedar.com under Cervus’ profile.