According to a report presented at the November 2017 Agritechnica show in Germany, CLIMMAR, the association of European machinery dealers, covered data from its most recent survey of dealers from 16 countries.

In comparing the CLIMMAR data with that compiled by the Western Equipment Dealers Assn. for its 2017 Cost of Doing Business study, which covers the U.S. and Canada, the most striking difference is the percentage of total revenue from new and used equipment sales.

On average, 56% of European dealers’ annual revenues come from new equipment vs. 46% of North American ag machinery sales. When it comes to sales of used equipment, only 15% of European sales comes from second hand machinery compared to 26% of North American dealers’ annual revenue. Most of the other major revenue segments line up pretty well between the two regions.

Average total sales are a different story. According to CLIMMAR, on average European dealerships employ 9.1 people. The data from WEDA, indicates the average size of North American dealership staffs is 19.3 people per location.

According to CLIMMAR, the number of dealerships from the 16 countries it represents is nearly 18,900. Based on the most recent estimates of farm equipment dealerships from Ag Equipment Intelligence’s Big Dealer reports there are 6,750 locations in the U.S. and Canada. 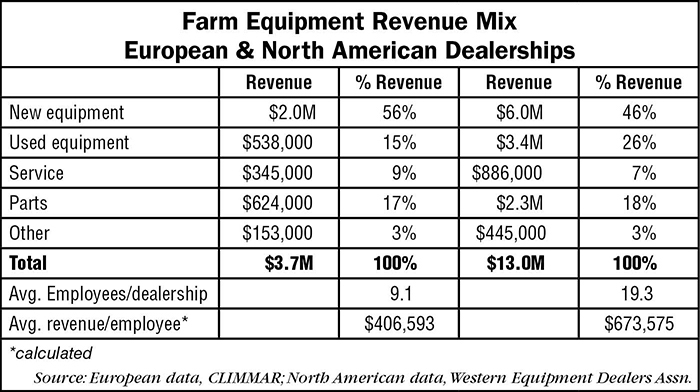