Lower farm commodity prices aren’t the only thing that determines whether or not North American farmers will increase equipment spending during the remainder of 2015 and into next year. Surveys have typically shown that in years when farm prices are down, growers would reduce or put off equipment purchases before they’ll cut back on farm inputs in an effort to produce positive returns. Of all their major production costs involved in farming, cash rent is the one that currently requires the most scrutiny.

The 2015 growing season is too far along to expect any significant shift in production costs that could affect farm profitability. But looking ahead, Gary Schnitkey, ag economist at the University of Illinois at Urbana-Champaign, cites three factors that will need to take place to produce positive returns for farmers in 2016, and incentivize them to increase capital expenditures.

“First, cashflows will need to be reduced even if corn prices are above $4 per bushel,” he says. “Two, cash rent reductions of about 30% from average 2014 levels are needed to generate farmer returns roughly the same as from 2000-2005. Third, keys to watch will be announcements of 2016 input prices by seed, fertilizer and chemical input manufacturers. If these prices are at 2015 levels, adjustments to lower commodity prices must predominately come by lowering returns to farmers and landowners.”

It appears that some progress is being made in reducing cash rents. In the August edition of its Agricultural Finance Monitor, the Federal Reserve Bank of St. Louis noted the largest recorded decline in cash rents for quality farmland since the bank initiated its ag survey in the second quarter of 2012. Quality farmland rents fell 6.4% during the second quarter of 2015, compared with a year earlier. Cash rents for ranch or pastureland also declined 5.2%, compared with a year earlier.

“The decline in cash rents could stem from the recent softening in farmland values and commodity prices,” the report said.

Looking ahead, proportionately more bankers expect to see continued cash rent declines for quality farmland in the third quarter, while most expect ranch or pastureland rents to remain unchanged. 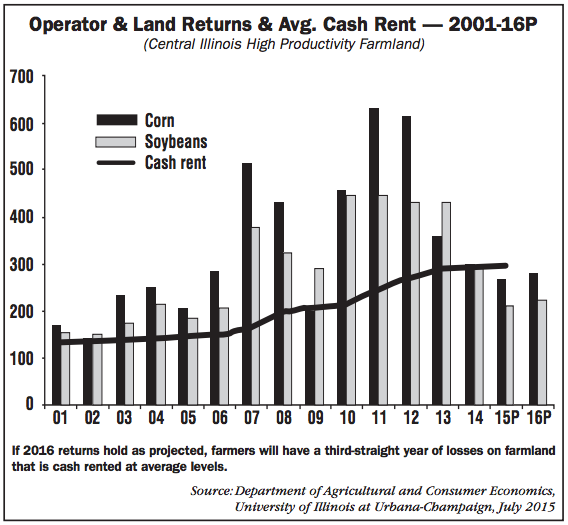 In his July 7 report, “Projected 2016 Crop Returns: Continuing Need to Adjust to Lower Returns,” Schnitkey, projected $4.20 per bushel price for corn and $10 for soybeans, which he called “relatively optimistic.”

"Fertilizer costs for corn in 2016 are projected at $138 per acre, down somewhat from the $148 level projected for 2015. At this point, fertilizer prices for 2016 have not been released. The cost decrease is based on two assumptions. First, there will be some softness in fertilizer prices. Two, farmers will cut back on fertilizer consumption due to projected low returns,” Schnitkey explained.

He also projected seed costs for corn in 2016 at $123 per acre, down $1 per acre from 2015 estimated levels. Likewise, he noted that seed prices for 2016 have not been released. “The cost decrease is based on the assumptions of relatively stable seed prices and farmers switching to lower cost hybrids and varieties and reducing seeding rates.”

Based on these assumptions, Schnitkey says operator and land returns in 2016 are projected at $280 per acre for corn and $223 per acre for soybeans.

He adds, “If 2016 returns hold as projected, farmers will have a third- straight year of losses on farmland that is cash rented at average levels. In 2014, operator and land returns were below average cash rents by small amounts. In 2015, operator and land returns are projected below cash rents, indicating that farmers will have losses on cash rent farmland when rent levels are near average. Cash rent negotiations for 2016 rents will play a large part in determining farmer returns for 2016.”

How Dealers Deal with Ag's Business Cycles: Are We Looking at a Downturn in Ag Equipment Sales in the Near Term?