During the last few years, dealers have been extremely conservative with their revenue growth projections for the precision farming segment of their businesses. This is a direct reflection of their customers’ more prudent purchasing habits. But the results of this year’s Precision Farming Dealer benchmark study reveal a reversal in these recent revenue trends.

Based on responses from 120 farm equip­ment dealers compiled during the first quarter of 2017, 23% of deal­ers reported 2016 precision revenue growth of 8% or more, which was more than double their forecast (10%) from last year’s survey.

On the other end of the spectrum, 8.7% of dealers reported revenue declines of 8% or more last year, about 3 points lower (11.1%) than they fore­cast during the first quarter of 2016. “This also marks the first time since the study began tracking revenue projec­tions 3 years ago that revenue declines of 8% or more were in single digits,” says Jack Zemlicka, managing editor of Precision Farming Dealer, a sister pub­lication of Ag Equipment Intelligence.

He adds that it’s worth noting 75.6% of respondents identified themselves as traditional farm equipment dealers, the lowest figure since the study began tracking business structure in 2015. Among this group, 41.8% reported 2016 revenue growth of at least 2%. Some 16% of respondents classified themselves as independent precision dealers, with 66.7% of this group reporting at least 2% revenue growth in 2016. 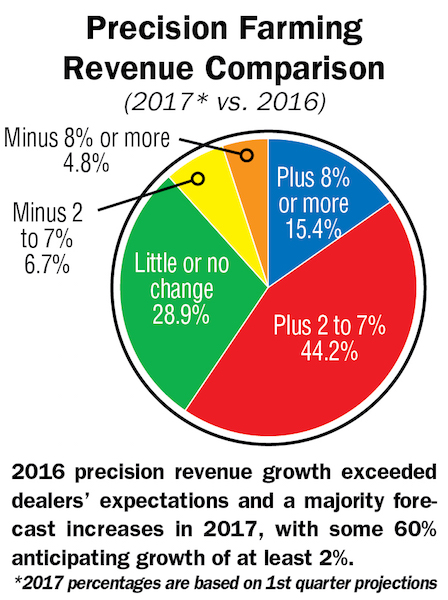 Some 40% of seed, chemical or fer­tilizer retailers participating in the study reported revenue growth of 2% or more in 2016, including 30% who saw growth of 8% or more.

Fewer dealers are also anticipat­ing measurable revenue declines in 2017. Only 11.5% are forecasting a dip of 2% or more, by far the lowest total in the history of the study. Only 4.8% of dealers are projecting rev­enue decreases of 8% or more.

The complete benchmark report appears in the Summer 2017 edition of Precision Farming Dealer and here.

‘Look in the Mirror’ When Branding Your Precision Business