It’s not a secret or surprising that farmers first look at reducing or totally eliminating purchases of equipment when they need to cut costs. This reality was further reinforced by a recent survey of more than 500 farmers by Farm Journal Media and posted on its AgWeb.com website on April 7. The media company has conducted the farmer cost cutting survey annually since 2012.

The list of the ways farmers economize during down times like the industry is currently undergoing include the following actions. (Note: respondents were able to offer more than one answer.)

Luke Chandler, deputy chief economist for Deere & Co., also addressed the drop off in equipment purchase in the past 3 years during a presentation at the USDA Agricultural Outlook Forum in February.

“It’s understandable that farmers have been cutting back on large or big-ticket items such as agricultural machinery. Machinery as a percentage of overall inputs has been declining in recent years. At the same time, we’ve actually seen seed increasing over the period and since 1995-2015. As a percentage of input costs, seed has actually doubled during this period,” said Chandler.

Pointing to farmers’ balance sheet, he says “It took from when USDA began keeping records until 2000 to grow equity in the U.S. farm balance sheet to $1 trillion. It took only another 11 years to double that and then 4-5 years later to nearly triple it to $2.6 trillion. In the past few years, some of that equity has begun to erode. 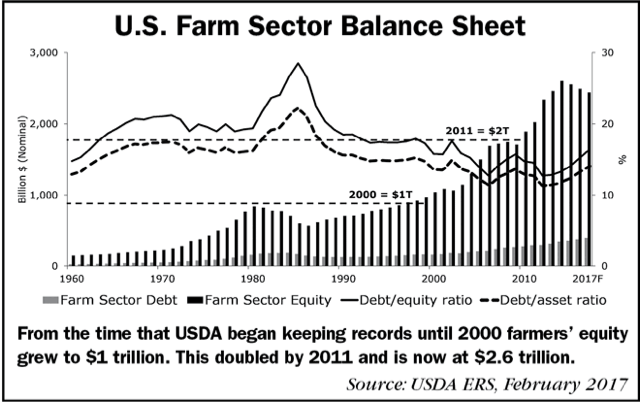 “In 2017 the USDA is forecasting that farm sector debt is expected to reach a record of about $240 billion,” Chandler added. “As a result we are starting to see those debt-to-equity and debt-to-asset ratios and also cash on hand to service debt being squeezed because of this downturn. Obviously we are nowhere near where we were in the ‘80s, but clearly that trend is in the wrong direction.”

Farm incomes are forecast to stabilize in 2017, which Chandler calls a “really good sign. There are definitely better signs in the other commodity markets such as cotton and sugar where we’re starting to see a better outlook. Grains still have a ways to go.” (See table below for production and profit estimates.)

In the Long Term

Beyond 2017, Chandler sees the rebalancing in some grain stocks, which will help improve farmers’ balance sheets as well.

“Looking longer term, tailwinds that are supporting our business and supporting the outlook for global agriculture, we believe are still very much in place,” he says. “Over the last 15 years, despite the last couple of years of hardship, we have seen an unparalleled period of prosperity in global agriculture. We’ve seen record high prices, farmers’ income at record all-time highs, global grain consumptions has increased by a third, global trade of grain and oilseeds has increased by around 70%.

“Food security has improved by about 28% over this period,” says Chandler. “It’s this combination of tailwinds driving the long run that we think are still very much in place and likely to drive our business over the long term.” 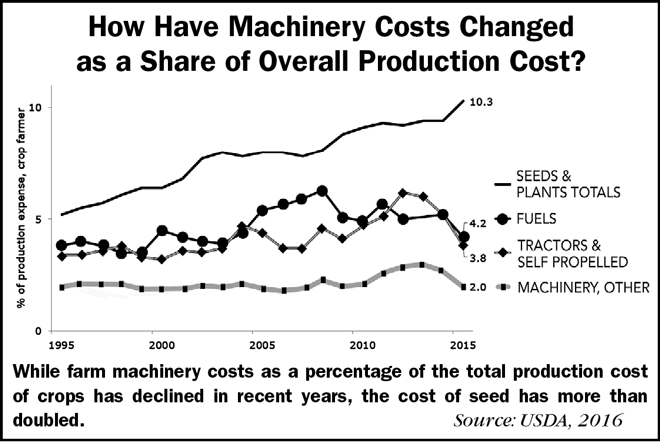 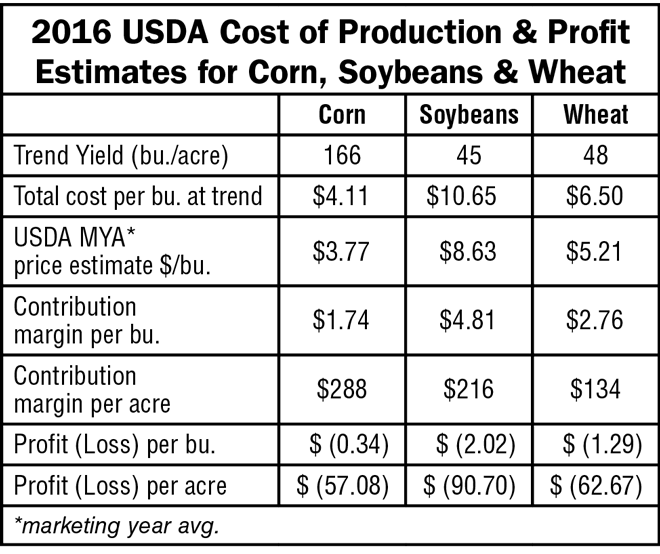