With few exceptions, global tractor and combine sales show little sign of picking up in the near term. While USDA’s May 10 report offered some optimistic news on crop surpluses, especially for soybeans, it remains to be seen whether or not the uptick in crop prices will hold.

Following USDA’s most recent World Agricultural Supply and Demand Estimates report, Michael Shlisky, machinery analyst with Seaport Global Securities, said in a note to investors: “We view this month’s update as mixed for the ag equipment stocks. Broadly speaking, the report was slightly bearish for corn prices, but slightly bullish for soybean prices, in our view.

“When adjusted for the calendar year, other crops and livestock-related expectations, we currently estimate that overall farmer cash receipts were down 10% in 2015 (including –13% for major crops), and in 2016, we currently expect an incremental decline of 5% (including –7% for major crops). Looking ahead to calendar year 2017, our current estimates suggest a 2% decline in cash receipts, suggesting further challenges to farm profitability and the sale of heavy equipment for another year,” said Shlisky. 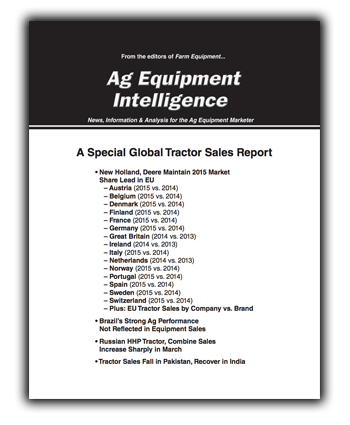 This special 5-page report is a quick review of how tractor sales fared throughout Europe in 2015, along with an up-to-date summary of tractor sales data for Brazil, Russia, India and Pakistan.

In his review of the first quarter, Nathan Kauffman, assistant vice president and Omaha branch executive of the Federal Reserve Bank of Kansas City, wrote: “The U.S. agricultural economy has continued to weaken in the first quarter of 2016 and is expected to remain soft through the year. The weakening has been relatively gradual over the past few years, but it has been persistent and has intensified in recent months amid mounting financial stress for some agricultural producers. Future cashflow appears likely to remain a top concern for producers over the coming year as agricultural credit conditions, and the path of interest rates, evolve.”

It would appear that the same trends impacting U.S. agriculture are mirrored on a global basis. The most recent CEMA report (May 16) would seem to bear this out. The CEMA Business Barometer, a monthly survey of sentiment of agricultural machinery industry participants in Europe, showed that the Business Climate Index, a broad indicator of current conditions and future expectations, declined sharply in May.

“The May reading of –40 was down from –25 in April, down from –19 in March, and down from –15 in February, and even down from –26 a year ago,” said Shlisky. “With respect to specific survey questions, 50% of participants now expect revenues to decline in the coming 6 months, compared to 43% last month.”

According to CEMA's commentary, the volume of orders “has reached a historic low” and only Scandinavia and Spain are positive at the current time. In other major countries, such as France, Germany and Italy, the majority of participants expect revenue declines in the months ahead. May’s decline is the fourth in a row, and sentiment has pushed further into what CEMA characterizes as “recession” conditions.

“We were somewhat surprised that the OEMs did not reduce the outlook for Europe on first quarter conference calls; the general tone is that 2016 will be flat to down 5%, though this survey suggests downside risk to this view,” Shlisky said.

“Commentary in the CEMA report shows that expectations have deteriorated in nearly all countries, and inventories are elevated in the key German market. Both tractors and harvesting equipment were cited as weak for both sales and orders. Overall, conditions have deteriorated rapidly in Europe since the start of the year,” said the SGS analyst.