Worldwide production and sales of farm machinery are expected to decline by 10% in 2015, according to the VDMA Agricultural Machinery Assn. based in Frankfurt, Germany.  After reaching an all-time sales high of $116 billion in 2013, sales of ag equipment fell slightly to about $114 billion last year.

VDMA is forecasting a drop in global sales to $102 billion in 2015. The deciding factor is the weak economic cycle in America and Europe, as well as in part of the Asian continent, especially in India, according to VDMA.

On a regional basis, the European Union and North America (NAFTA) account for 50% of worldwide production of farm equipment and 48% of sales. In total, all of Europe produced slightly over one-third (34%) of farm machinery globally, while North American manufacturers contributed 22% of ag equipment worldwide.

According to revised estimates by VDMA for 2014, the market volume for North America came to about $26 billion at current exchange rates. In its “Economic Report — 2015” covering agricultural machinery, VDMA notes that, of the three countries Mexico, U.S. and Canada, only Canada has a net import requirement. 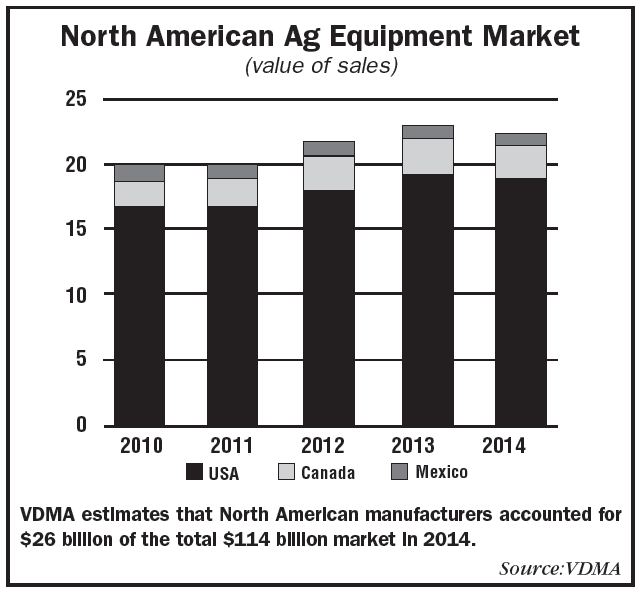