Following an 18% growth last year, to €80 billion ($112 billion), Dr. Bernd Scherer, managing director of VDMA, the German Agricultural Machinery Assn., estimates global production of agricultural machinery and tractors for 2012 will reach €86 billion, or the equivalent of about $120 billion.

According to the association, sales were approximately 25% higher than the average for the preceding five years. VDMA attributes the upswing largely to two factors. The first is a considerable increase in agricultural investments in the traditional sales markets of Europe and North America following the 2009-10 recession. At the same time, new production capacity is being established in the newly industrialized countries to cover the increasing need for agricultural investment that exists in those emerging countries. 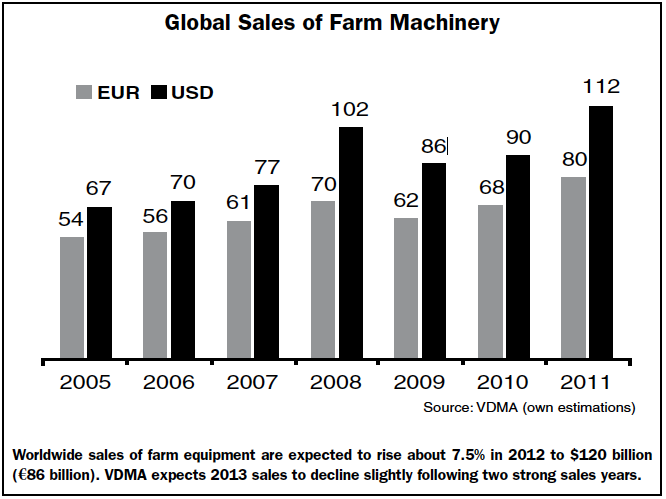 Ag Income & Demand.  Exceptionally high investments made by farmers and contractors (custom harvesters and sprayers) in most regions of the world in the recent past are based on greater purchasing power, according to most recent report from VDMA.

“Agricultural incomes have risen due to good prices and also as a result of increased production of grain, oil seeds, milk and meat.” As a result, agribusiness has become attractive again to many investors from outside the industry, and this is being seen particularly in emerging markets.”

VDMA expects a slight decline in recent pricing levels, but still anticipates a relatively tight supply situation for most agricultural products, which will continue to support the market.

Following a two-year boom, VDMA says diminishing growth is to be expected. “In the European industry, this is presently already being felt in incoming orders. However, with existing orders the utilization of production capacity is assured for a comparatively long period. In Western Europe, the order backlog is currently at three months. For the coming year, the industry can rely on a continuing strong need for investment, particularly in Central and Eastern Europe and also in Asia,” says VDMA.

Study: Global Demand for Farm Equipment to Reach $124 Billion in 2014