Frankfurt-based VDMA Agricultural Machinery Assn. is forecasting global production of farm equipment will increase by 6% in 2013 compared with 2012, demonstrating continuing strength in the agricultural sector.

According to the trade group, “The production of agricultural machinery has experienced surprisingly dynamic development in the past 3 years. VDMA estimates the worldwide volume for 2012 at €91 billion ($119.5 billion), which represents an increase of 12% compared to the previous year.” 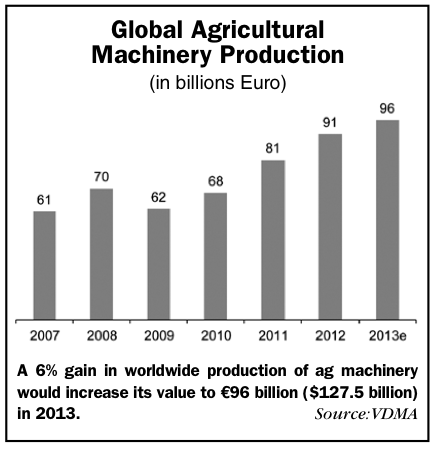 With a 6% gain in 2013, VDMA estimates the value of worldwide production of farm machinery to reach €96 billion ($127.5 billion) for the current calendar year.

“With a market share of more than 30%, the European Union, with Germany as its most important production location, continues to play a leading role,” says Dr. Bernd Scherer, managing director of the VDMA Agricultural Machinery Assn. However, the group added, last year’s results for the two locations with the next largest sales levels — the U.S. and China — rose even more significantly. For both countries, above-average growth is also foreseeable for this year.

The association is predicting a “stable turnover level for European manufacturers this year, even in the light of the fact that overall demand in the European Union is slightly below that of last year.”

According to VDMA, the business climate in the European agricultural machinery industry continues to be positive. Currently one-third of top managers anticipate growth in industry sales for the year, 40% expect stable or flat sales and one quarter foresee a decline in sales through the remainder of 2013.

The agriculture giants of the EU continue to be Germany and France.