By Dave Kanicki posted on May 9, 2016 | Posted in Dealer News, Manufacturer News 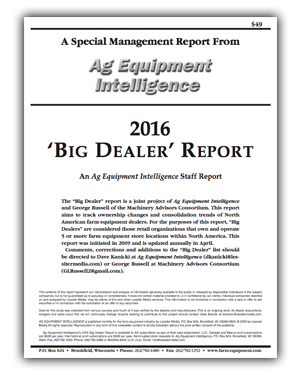 Over the last year or so there’s also been a flurry of M&A activity among equipment manufacturers, particularly when it comes to shortline or specialty equipment. The North American agricultural machinery manufacturing industry currently includes about 1,100 companies, but it’s likely there will be increased consolidation among ag equipment makers as the ag market continues to struggle in the current economy.

“Well capitalized industry players have used the current market conditions to strengthen their strategic position, by adding technology and capabilities, product lines and expanding their dealer and market access. We expect this trend to continue and perhaps even accelerate over the near term,” says Eric Bosveld of Bosveld and Associates in a recent report.

With the recently announced joint venture between John Deere and Hagie Mfg., “a significant portion of the ‘independent’ self-propelled sprayer market has now disappeared,” says Bosveld. Recent activity in this segment includes the Deere-Hagie tie up, Exel’s acquisition of Equipment Technologies (Apache sprayers) and, back in 2014, New Holland’s acquisition of Miller St. Nazianz.

“Access to distribution is one of the main motivators for the sells as growers get larger and require better service,” Bosveld says. A change in distribution model is a significant part of the Hagie deal. For most of its 70 years, the sprayer manufacturer has sold its equipment through a factory-direct model that included in-field service technicians and salespeople.

In a video released by Hagie on April 5, Newt Lingenfelter, business and product development manager, expressed some of his frustrations of the factory-direct distribution model with Hagie CEO Alan Hagie. In the video, “Hagie Unfiltered,” Lingenfelter says that while factory-direct has worked for the company’s current product lineup, the product portfolio Hagie will be introducing was going to require a new approach to distribution.

“We’re currently aligning the field staff — technicians and sales — with their area John Deere dealers to pro­vide them opportunities for employ­ment within the John Deere dealer network,” says Kent Klemme, the new president of Hagie who comes from John Deere.

Bosveld says another key trend in the ag equipment M&A market is the majors and others acquiring companies or divisions of companies to expand their technology capacity. An exam­ple of this would be John Deere’s acquisitions of Precision Planting and Monosem earlier this year, both of which strengthened Deere’s capa­bilities in seeding technology. Barry Nelson, media relations manager for John Deere, told Farm Equipment that the Monosem deal would help accelerate John Deere’s market reach in precision planting equipment, while Precision Planting extends Deere’s range of retrofit options for planting equipment.

Precision farming technol­ogy companies Topcon, Trimble and AgJunction all announced acquisitions during the last year. Topcon acquired NORAC Systems International, a developer of ultra­sonic sensing and boom control tech­nology for ag equipment, and Digi-Star, a leader in agricultural solutions involving weight sensors and control systems for feeding, planting, fertil­izer and harvest equipment. Trimble expanded its precision base with the acquisition of the assets of Agri-Trend, which operated a network of over 200 specialists throughout the U.S. and Canada, including 110 indepen­dent coaches who specialize in agron­omy, precision farming, crop market­ing and farm business management.

AgJunction completed its merger with Novariant Inc. in October 2015. At the time, the company said it gained a preeminent position in auto-steer and machine control technologies through the merger.

In addition to these acquisitions, the precision farming companies were probably the most active of any equipment groups over the past 5 years. Among their acquisitions included:

Bosveld notes that private equity firms have also been actively entering the ag equipment market as well. “GenNex acquired Salford as a platform invest­ment and has since completed add-on acquisitions to diversify its prod­uct line,” he says. Those “add-ons” include Valmar Airflow, a manufac­turer of seeding and granular applica­tion equipment in May 2015, and the AerWay line of tillage products from SAF-Holland in December 2015. In 2014, Salford also acquired BBI Spreaders.

In January, Bestway, a manufacturer of pull-type sprayers and other farm implements, was acquired by a local investor group, which included two members of Bestway’s management team.

In March 2014, Ingersoll Tillage Group closed on its acquisition of Corporacion Patricio Echeverria, a manufacturer of agricultural and hand tools, which included the Bellota brand. A significant share of Ingersoll was then acquired by ONCAP, a private equity group headquartered in Canada, in June 2015.

In 2012, Kubota acquired Kverneland and began its announced push into the production agricultural segment, is one of the biggest M&A moves of the past half-decade. It ushered in a slew of other activity within the ag equipment space.

In May 2015, Remlinger Mfg. acquired Sukup Mfg.’s implement line, which included grain drills, row-crop cultivators, shredders, rotary cutters, food plot planters, seeders, grain carts and rippers. Sukup sold the imple­ment line to focus on its grain stor­age product business, which it had expanded in April 2015 through the acquisition of DanCorn, a lead­ing dealer of grain drying, storage and handling equipment in Denmark. DanCorn had been the exclusive dis­tributor of Sukup products in all of northern Europe.

Why John Deere Succeeded When Others Didn't

This 2-minute video in the “Deere Historical Perspective Series” explains John Deere’s early insistence on process as its differentiator. His first patent of 1864 was for a process, and Deere demanded provide consistency of production before moving on to other products. That performance set the table for Deere to leverage riding cultivators and other innovations in the post-Civil War era, as the company empowered farmers to how they could realize more from their farms.
View More