Used Combines Are Going to Heat Up in a Big Way

2021 started with a bang, and there is little insight that shows it won’t end the same way. Commodity prices are seeing a weather market take hold; world grain stocks are at all-time lows, and used equipment is still in very short supply.

On my podcast, Aaron Fintel and I have talked about the rapid decline of equipment from listing websites and how the numbers increase month-over-month starting in March of 2021. Every segment of machinery has seen a decrease in available stock except combines. Combine numbers have declined since January of 2021, but nothing in comparison to the rest. As I look at the data, the combine market will catch fire between June and December 2021.

Over the past 7 years, combines have been an expensive piece of equipment to trade. Market conditions have made it tough to trade up, and many have elected to continue to run what they have and fix it as needed. In many cases, the last time a combine upgrade took place was in 2013. Also, this was the last time on-farm-income was high, and tax regulation also promoted upgrading. The combine market has struggled ever since, but I think the sleeping giant is starting to wake up.

At the 50,000 foot view of the combine market, it’s easy to dismiss much of the action taking place, but the data tells a slightly different story. Inside the hour ranges, volatility is high. One month a bunch of combines are removed, and the following month most of them are put back on. Looking at the chart, when a number is negative, there was an increase in the inventory, while a positive number shows a decline.

January and February are months where combine inventory typically sees growth. In most of the country, new combines are delivered and few used machines are retailed. So, to see stock grow is not out of the norm. The biggest reason I see combines increasing in sales is the amount of volatility in February through May. 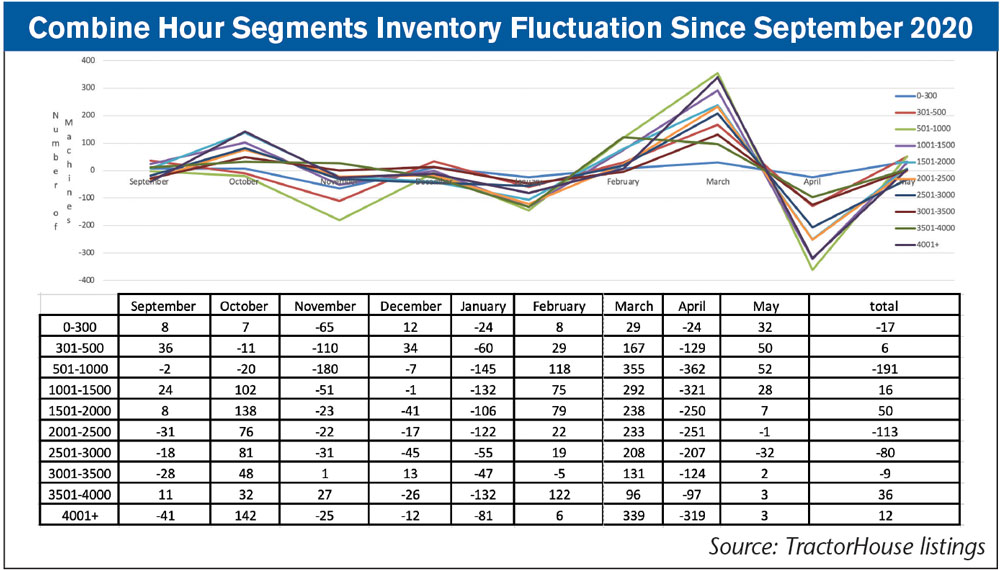 I am suspect of the April combine numbers. I don’t think many new combines were delivered, causing the number of used combines to jump. In April, every other used equipment segment decreased the number of units month-over-month. So, if combines are the only used equipment segment that grew, some combines were traded on other machines, maybe tractors for example. This is pure speculation as I have no retail sales data to verify my hypothesis, but it does seem to make sense.

May and June will be the accurate tale of what lays ahead for the combine market. Post planting will give operations a chance to see what stands look like and start adjusting plans set in motion when corn was still $3 and change, not $6. In June, a large auction will have 40 plus combines auctioned off on the same day. An auction of this magnitude isn’t anything new, but the auction’s timing is worth taking note of. The June auction will set the tone for how the combine market will react throughout the rest of 2021.

If the auction is a bust, what little hope remains for used combines will be blown away. On the other hand, if the auction has a good showing, a sense of urgency may spur buyers on the fence to buy the machine they have been eyeing.

I think the auction will bring the money, and this will be the catalyst propelling the combine market up. If producers believe they might have a tax issue this year, the used combine might be the only machine available, in any supply, for year-end purchase. Tractor, sprayer and planter inventories will not be readily available by the end of the year if they are not available now.

Step Aside if Emotions are Tied to a Trade

[Podcast] Too Many Used Combines — Time to Get Creative in Marketing