Used Equipment Issue is Still With Us

More often than not, when my office phone rings it’s someone who wants to talk about the situation with used equipment. We even got a call last week from someone in London asking about it.

This is what we know for sure: Used equipment inventories are still an issue, but from what we’re hearing and seeing, it appears it’s more manageable than it has been for some time. This has come about as many dealers have bitten several bullets.

First, some have resorted to auctions and are taking what they can get for their used. Also, some are turning down new equipment sales if it involves a trade-in of machinery that they already have on their lots. Dealers who commented in the most recent Dealer Sentiments & Business Conditions update survey, said, “We saw more online auction buying in the month vs. dealership purchases”… “We are planning to run our used combine, planter and hhp tractor inventories very lean in 2017.”

On the other hand, we’ve seen some positive trends recently like the uptick in pricing in tractors and combines last fall and winter (see charts below). 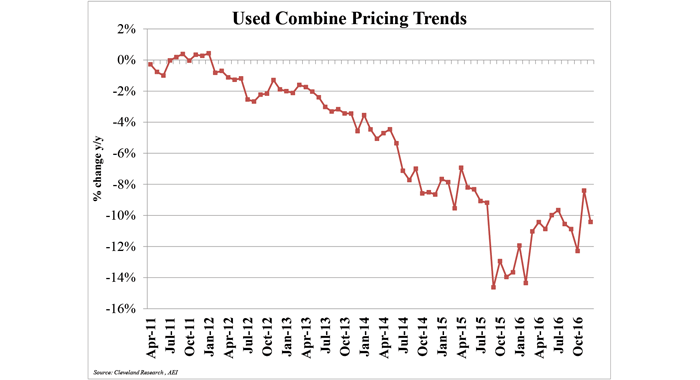 When Ag Equipment Intelligence’s “On the Record” interviewed Greg Peterson (MachineryPete.com) in St. Louis a couple of weeks ago he indicated he higher fourth quarter pricing on planters and combines surprised him.

“We did have a couple of very surprising sectors in the fourth quarter of 2016. One was planters. November and December we started to see much stronger auction prices on large late model planters. And we really saw the same thing with combines. It surprised me, the strength of these auction prices, a lot of one and two year old combines selling for very strong auction prices. My index rating went up on combines and planters a little bit more than I thought it would.” 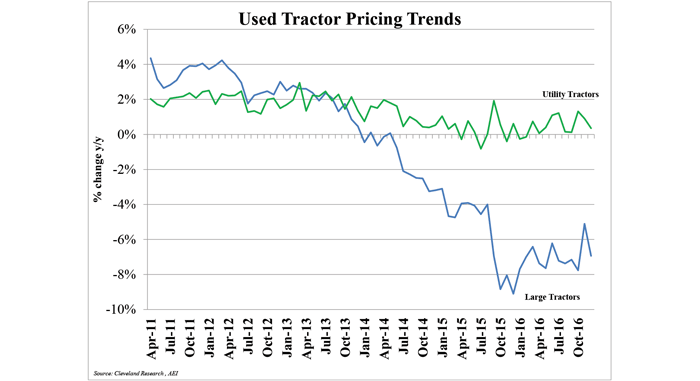 In that same episode of On the Record, the January Purdue/CME Group Ag Economy Barometer showed marked improvement. Both the Index of Current Conditions and Index of Future Expectations increased during December, the biggest improvement was in producers’ expectations about future economic conditions. The Index of Future Expectations rose to 146 in December, which was 51 points higher than October and the highest reading in 15 months of data collection.

All of this probably hasn’t yet shown up on dealers’ bottom line, but it’s much better than we’ve seen or heard during most of the past 3 years. Is it the “Trump effect?” Hard to tell, but another dealers put it this way: “Customers coming in the door have a more positive attitude. They are not necessarily buying more than before, but have a more positive outlook.”

[Podcast] How the New Equipment Market is Impacting Used Equipment

How the Ag Economy is Impacting the Used Equipment Market

Is There Money to Be Made In the Used Equipment Market?