The company said its top priority is to "achieve an investment grade rating, with potential to substantially reduce interest expense." It also said its potential target dividend policy is for 25-35% of the group's net income, with a minimum payout target of €150 million (approx. $203 million), under normal circumstances.

In its presentation, the company also revealed its major competitors as well as information that painted an interesting picture of the company's operations. Overall, in 2012 industrial revenues, with $33.4 billion, CNH Industrial trails only Caterpillar ($66.4 billion), Volvo ($46 billion) and Deere & Co. ($35.3 billion). 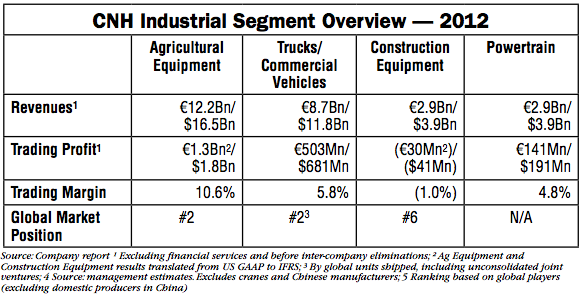 In the longer term, the company stressed the underlying ag equipment drivers of rapidly growing global population food requirements and the increasing consumption of protein as "structurally positive." It also pointed to increasing industrialization of farm operations, which it said,"supports long term growth for heavy ag equipment manufacturers."

In terms of major ag equipment competition, in addition to Deere, CNH also lists Kubota, with $15.4 billion in revenues in 2012, and AGCO, with $10.5 billion, among its chief rivals.

As a group, farm equipment was far and away the biggest contributor to revenues and profit in 2012. Last year, ag machinery revenues com- prised 45% of the total, followed by trucks and commercial vehicles at 33%. Construction equipment and powertrain revenues each contributed 11% of total revenues in 2012.

Breaking down the $16.5 billion in farm equipment revenues shows that tractor sales accounted for 56% of 2012 ag revenues, hay, forage and specialty equipment contributed 24% and harvesting machinery 20%.

A breakout by regions showed that 40% of CNH Industrial's revenues originated in Europe, 28% from North America, 15% from Latin American and 17% from the rest of the world (ROW).

Across its 12 brands, CNH Industrial boasts 64 manufacturing plants, 49 research and development centers, a work-force of more than 68,000 people and some 6,000 dealers, along with a presence in 190 countries.

In a note, Stahl said,"95% of Fiat Industrial's profits in the second quarter came from CNH; we expect it to contribute 80% of next year's profits. Basically all of that comes from CNH's agricultural equipment division. We see declining volumes and lower margins for CNH next year vs. consensus' expectations of 9% higher profits year-over-year. We also expect lower crop prices and lower farm income to impact farmers demand for new equipment next year."

Stahl also noted slackening demand for Iveco trucks in Brazil as a significant headwind for the new CNH Industrial.We believe that truck demand in Brazil will fall sharply from current levels. The truck cycle has disconnected from the wider economy plagued by lower growth, inf lation and waning confidence.

"Uncertainty going into the election next year and an increase in real funding costs for truck purchases are possible triggers for a drop in demand," Stahl said.

On October 3, research analysts at TheStreet also downgraded the stock of CNH to a "hold" rating from "buy."

They wrote, "The company's strengths can be seen in multiple areas, such as its revenue growth, impressive record of earnings per share growth and compelling growth in net income.

"However, as a counter to these strengths, we also find weaknesses including generally higher debt management risk, a generally disappointing performance in the stock itself and poor profit margins."