Dealer concerns about used equipment inventories are growing nearly as much as their backlog of tractors and combines. And while pricing on big tractors has slipped somewhat, the pricing on combines continues on a steady, downward trend. Dealers also mentioned that the backlog of used planters is also becoming a problem.

According to Ag Equipment Intelligence July 2013 "Dealer Sentiments & Business Conditions Update" survey results, a net 20% of North American farm equipment retailers say the inventories of used equipment is "too high" (34% too high, 52% about right, 14% too low). This is up from a net 15% of dealers who said the used equipment backlog was too high in the previous month.

One survey respondent described the situation that many dealers are finding themselves in as "Those buying want new and want to trade, but the market is not there for used unless you can buy below book."

More than twice that many dealers - 44% - categorize their used combine inventory as "too high" (48% too high, 48% about right, 4% too low). This is the second highest net percentage of dealers reporting high used combine inventory since Ag Equipment Intelligence and Cleveland Research Co. began tracking this data in October 2011. 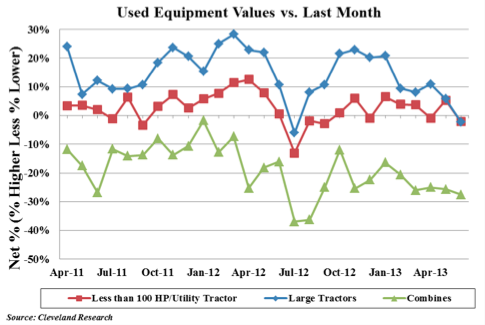 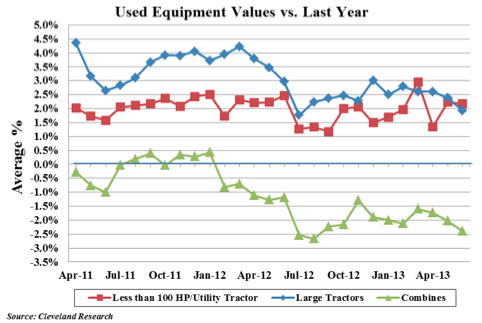 Relative to last month, a net 2% of dealers report lower values for under 100 horsepower tractors. Prices in the latest survey for this category of equipment were up 2.2%, which is about flat with the previous month.

In their commentary on used equipment, dealers also identified used planters as a potential problem in coming months. "Used planters are dogs right now. Other local CIH dealers are dumping used combines" ... "Late model used 24 row planters are not moving. There are too many units on hand for the demand" ... "We're a little high on combines but low on planters and tractors" ... "Could use more used tractors" ... "We need to move some used combines and planters. Could use some 200 hp tractors" ... "Still struggle with too many used combines" ... "Combines and 4WD tractor inventory is higher then I would like it to be" ... "Combine inventories are stagnant and under pricing pressure" ... "We have too much money tied up in inventory."