Working Together to Form a Dream Team

By Mike Lessiter posted on October 13, 2011 | Posted in Dealers on the Move 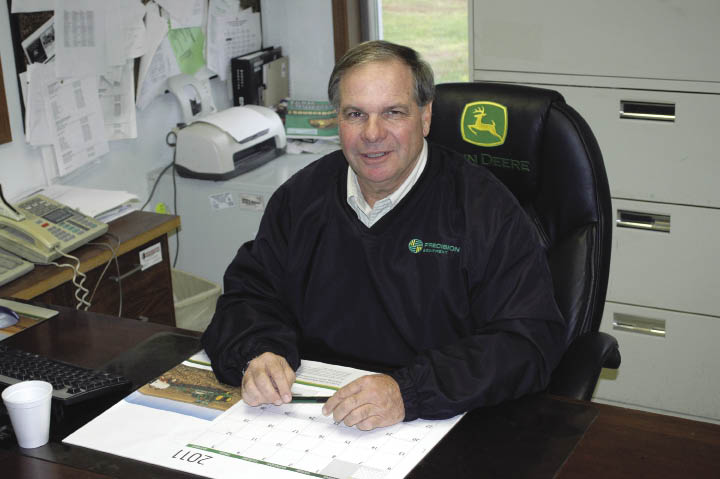 Chairman of the
Board: Ron Farrier

Years with Organization: 26, started with Farmers Implement in 1986 as a salesman, and became co-owner in 1994. He and his family also run Farrier Farms, a 2,000-acre
corn/bean operation
in eastern Iowa.

Role: In addition to being one of the four board members, Ron Farrier is also chairman of the board. In that role, he is the liaison between the general manager (Randy Amosson) and the board. "We wanted to make sure that each of the four owners was not trying to tell Randy how to run the organization, but that we would have an open dialog on vision and direction."

Sitting in a modest office in the front of the Washington, Iowa, store, Ron Farrier was asked to cough up a title for a hypothetical keynote presentation to other dealer executives. His answer? “Let’s Work Together.”

“Sometimes we get on an ego trip and see only one way to do something,” says Farrier, chairman of the board of the new Precision Equipment. “We need to communicate and take all the ideas, bring them together and get the best idea for anything that we do. To do that, we must listen to people and use their talents. You can’t be a dictator of everything.”

That was not an easy lesson for Farrier, who began his career as a teacher and coach, where dominance and control ruled the day. His management style evolved when, as a salaried production scheduler at a Massey Ferguson’s factory, he learned that barking orders to union workers was completely useless.

In that environment, he says, it was clear that no matter who was in charge and how obvious the solution was, you couldn’t just “tell” people how to do something.

That experience, along with getting the best out of his people as a teacher and coach, was something he carried with him into the dealership world. And, it’s something he must tap into today as chairman of the board of a newly rolled-up organization.

Trying to “marry up” two fierce competitors is challenging in any situation. And Farrier had to set aside the heartbreak and envy that stemmed from being on the outside looking in as Elder Implement acquired nearby locations he wanted.

“Elder grew into what I envisioned when we started acquiring dealerships. There were opportunities for us to acquire the stores that Elder ended up with. I was always in the ballgame for those opportunities, but didn’t win.”

So you can imagine the surprise when Farrier first talked to his staff about merging with Elder’s. “The location managers, and even my own son, looked at me like I was nuts. It was because of the competitive spirit and motivation of the team — we’d been on the battlefields against them.”

But Farrier got through to his team by discussing the opportunity to assemble an even better team of winners by combining forces. And he believes it — the new company is truly an all-star team.

While the journey to a large multi-store operation went differently than he expected two decades earlier, he arrived at the destination nevertheless. “We’d been knocking on the door trying to get bigger, but it wasn’t happening for a variety of reasons. But, through determination and setting goals, it finally did.”

Why Merge His Dealership?

At 59, Farrier wasn’t ready to sell out and retire. But to stay in the game, he knew the company needed to expand beyond its three-store operation and resources.

“You’ve got to show more support to the customer today, especially with precision farming (or AMS). That takes well-trained people, not only technicians and salesmen, but the managers who oversee everything that must be done. Carl Wulf (partner and co-owner) and I were getting too thin on time to get all that stuff done, not to mention HR, insurance and all those things.”

The forte of both he and Wulf were sales, relationships and work ethic. In a smaller store, he says, “You can get by playing it off the cuff; we’d just roll up our sleeves and make things work.” But as the operations grew, more was needed, particularly in looking down the road to a succession plan that would meet John Deere’s approval.

“A secondary benefit was the expertise of the EQUIP business system. Farmers Implement had been preparing to switch over to meet John Deere’s requirements, but since Elder had been on it already, there is a great level of support and expertise to make the transition seamless. We have 2-3 support guys here today to make sure our staff understands. Training was a key benefit to merging.”

Farrier is quick to praise the leadership team, and its record of presenting multiple scenarios as a planning discipline. “This is not about just showing up for work today. The team is studying what could and could not happen. Each of us benefit from experts who make suggestions and can identify a red flag or opportunity. To solve a problem, you’ve got to be aware of it, and that’s what this new team will do for me.”

The first thing in any merger dialog is a “discovery process” of each party’s philosophies. “If both aren’t willing to share the responsibilities, you’re going in the wrong direction,” says Farrier. “If a person insists on 51%, in my eyes, you might as well let him have it all.” He adds that the ownership control can be adjusted later on after things are succeeding, but trust and equal effort to achieving success is critical.

Farrier adds that the John Deere territory manager, Chuck Alexander, was vital to the process and helpful for both parties. “They are fortunate to have him because there are times your patience runs out and you want to just say ‘Forget it, I don’t want to go on.’”

Early on, the companies used an outside facilitator but later pegged Farrier for that role. “That’s where my role changed to making sure we got back together and stayed on the topic. That’s a challenge because you can get off to the side very quickly.”

As things progressed, lawyers and accountants were pulled in to draft the buy-sell agreements, the operating agreements on the board of directors and all the details on spending rights, and managerial limitations and balances. “A great deal of time was spent make sure they’re catching everything and satisfying John Deere at the same time.”

It’s a complicated process, says Farrier, in that owners are reviewing profit projections to see if the merger makes sense while Deere’s requirements are satisfied. And a foundation of trust — even between two highly competitive companies who might not move forward with the merger — is the only way to make it work.

“Everybody had to share their information and it goes back to the trust — how far are we going to go? If you start talking about individual employees, you sure don’t want to your best talent raided if the deal falls apart.”

John Deere was watching the development for nearly a year, so there was little surprise by the time the owners and leadership team arrived in Olathe, Kan., to present the merits of the merged company and request John Deere’s official approval. By the time that PowerPoint presentation was constructed, Farrier says the group was already on to preparing all the duties and milestones for proceeding, assuming Deere gave its stamp of approval.

Sounding the Drum on Equity

Those who’ve worked with Farrier over the years know well what he stresses most around the dealership: closing up work in progress in the shop, keeping a clean parts inventory and selling wholegoods on a total value proposition, not on price. Now that he is chairman of a large multi-store enterprise, emphasis will be placed on retaining and growing equity.

“Our goal for 2012 is to increase our equity by over 5% to assist us with additional mergers and acquisitions.” There are two ways to make that goal — selling and making a profit for the company, and leaving the equity in the company.”

The reason equity is so important to dealers is the reliance on lenders, a lesson many American businesses learned the hard way as loan approvals were hard to come by in recent years. “Let’s say corn prices drop to $3 per bushel. Sales are going to drop, but we’re still going to need to feed our fire.” And that doesn’t even take into consideration that interest rates could rise from their low levels today. A good equity level, says Farrier, is the stabilizing force for a growth business moving forward.

Beyond that, Farrier, as chairman, wants to set the table for future growth. He will do that first by seeing that the company’s equity targets are maintained and second by being a good and approachable neighbor.

“I want to keep those doors open to more merger and acquisition opportunities; I want to have good neighbors to either side of us so it’s not a battle ground. Until John Deere tells us otherwise, I think the message for all dealers is to keep on growing.”

Keeping Each Arm of the Dealership Working Together